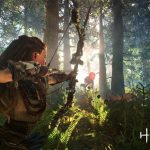 You are reading
Horizon Zero Dawn PC Patch 1.01 Is Live

Horizon Zero Dawn officially launched on PC on August 7th, 2020. While the game was a massive success on PlayStation 4 when it launched in 2017. However, the launch of the PC port has been hit and miss for many PC users. The game has struggled with a variety of bugs and issues. Guerilla Games quickly acknowledged the problems and got to work on fixing them.
In a post on Reddit, Guerilla Games revealed what we could expect to see from patch 1.01 in Horizon Zero Dawn. From fixing launching issues, as well as giving updates on known issues that they are fixing. For the full details of Patch 1.01, you can check out below. Not sure if your PC can play Horizon Zero Dawn? You can check out the minimum requirements here.

In addition to the issues identified previously, we’re working on a number of high-priority issues:

Have you encountered these issues in Horizon Zero Dawn? Let us know in the comments and don’t forget to check back for the latest gaming news and information.