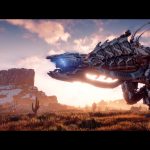 Horizon Zero Dawn was the smash hit new IP from Guerilla Games that launched on PlayStation 4 in 2017. Guerilla Games who is most well known for its FPS series Killzone made its first step into an open-world design with a big bang. The sequel to the game Horizon: Forbidden West was announced for PlayStation 5 last month. This has led to a great cycle of anticipation for the release of the game on Steam and the Epic Games Store. The launch of Horizon: Zero Dawn is just a little more than a week away. We have learned what the official minimum and recommended specs will be for the game.

What do I Need To Play Horizon: Zero Dawn On PC?

Horizon: Zero Dawn is set to come to PC August 7th, to both Steam and the Epic Games Store. If you are wondering what kind of specs you will need to run the game you can check out the official requirements below. Thre is currently no information on what kind of benchmarks you will achieve with the recommended settings at this time.

There will be a host of new features that PC players will be able to take advantage of when the game launches. From ultrawide support, unlocked framerate, and more. This game will look absolutely amazing on the PC, it will be interesting to see what the modding community will do with the game in the future. There is not much more time to wait until we can get our hands on the official PC port of the game.

Will you be picking up Horizon: Zero Dawn on PC? Let us know in the comments and don’t forget to check back for the latest gaming news and information.