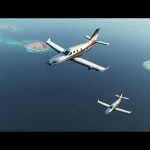 You are reading
Microsoft Flight Simulator 2020: Best Places To Visit

The gift that Xbox Game Pass keeps on giving. Microsoft Flight Simulator 2020 released this summer on Xbox Game Pass for PC as well as a ten physical disc version. A console release is yet to be dated; however, it could be something Xbox Series X owners get to experience come launch. A remarkable new feature in Microsoft Flight Simulator 2020 is the streaming Bing map data. Microsoft Azure cloud servers stream petabytes of satellite map data over the web to build the player’s environment. In addition, the game uses real-time weather along with the Earth’s rotational data.  So when and where its nighttime, it will be nighttime. When and where the weather is, it will be reflected in the game.

This makes for a remarkable experience that has players chasing storms. As well as being able to explore parts of the planet you may never get to, especially in today’s new world. Of course, you can still alter the games time and turn off the weather as you would almost any other game. Microsoft Flight Simulator 2020 has countless options for inexperienced pilots. With that said, if you are new to the game or just checking it out via Xbox Game Pass, we have rounded up the best places to visit while learning how to fly.

Watch The Sunset Over The Vegas Strip

You can use a tool like SunCalc to determine the time when the sun will be setting and rising in a given area. A place that I found easy for beginners was the Vegas Strip. Head over to McCarran International Airport; once you get up in the air, take it slow and low. The Vegas Strip is right there next to the airport. If you look off into the mountains around the Vegas desert area, you can watch the sunset as you slowly circle around. If you have ever had the chance to visit Vegas, you will notice all of the hotels and casinos you know and love right away as well as their rooftop pools. The level of detail here is outstanding. If you haven’t been to Vegas, Microsoft Flight Simulator 2020 does a fantastic job showing you around.

If you have ever dreamed of yelling, “Ricola” from the top of a mountain in The Swiss Alps, this might be the next best thing. Select a smaller aircraft with a big viewing angle and head over to the Ulrichen Airport. Fly North East, and in under a minute, you will be in the beautiful Switzerland mountains. If you can maneuver around the mountains, flying low at the base over the villages is a site to see for sure. Be ready to take on some minor pressure systems as you navigate the elevations.

Check Out Your Favorite Sports Stadium

As an inexperienced pilot, it was challenging for me to locate places like Yankee Stadium and Levi’s Stadium. There is no Waze or navigational-like equivalent to take you precisely to a landmark. Circling Cities looking for a specific building is both dangerous and challenging. However, I found it easy to navigate a city like Nashville. Nashville is way less dense compared to a place like NYC. Once you take off from BNA, you can’t miss the city. Both Nissan Stadium and Bridgestone Arena are easy to spot on the north end of the city. You can even see signage for Titans Running Back Derek Henery and Tight End Delane Walker outside Nissan Stadium as well as some historic landmarks as you fly over.

Hop in a smaller aircraft and set a departure for the Grand Canyon National Park Airport. After you take off, circle around the area, reduce your speed, and fly low. You will be right on top of one of the most beautiful and historical National Parks in the United States. If you want to get crazy, you can traverse the canyons. This makes for an excellent opportunity to check out “The Aerobatic Tourer” the Extra 330LT. It has wide viewing angles and traverses small areas well.

Watch The Sunrise Over Tsushima

Some gamers may already be familiar with the Feudal Japan era environments of Tsushima. This is an excellent opportunity to check out the landscape as it is today. Head over to the Tsushima airport and try the ICON A5. The amphibious aircraft makes for a smooth landing on the water. Japan is a great place to visit at night as they are 13 to 16 hours ahead of the US. In the local US evening hours, you can catch the sunrise as it passes over Japan. The mountains, farms, and fishing villages make Tsushima a special place to watch the sunrise.

Most of us will never get the chance to see what Mount Everest is really like. Being able to just peek into the area is one of the most revolutionary experiences in gaming today. Microsoft Flight Simulator 2020 gives you the opportunity to take in a view up close. Depart from Syangboche Airport in Nepal, then head north. Just slightly off into the East, you will come across the lower peaks around Mount Everest. The elevation and the pressure systems are going to be quite the challenge. Not to mention avoiding the mountains themselves. However, there are some lovely views, and it’s quite the overall experience.

Fly Over The Cliffs of Moher

If you are a fan of The Princess Bride or Harry Potter, you can navigate to the western shores of Ireland and visit The Cliffs of Moher. From Inishmore Airport, head Southeast past the two smaller islands towards mainland Ireland. As you fly over, you will see the sprawling towns across the beautiful green landscape as it meets the ocean. There are nearly no trees in this area, so you get the perfect view of the cliffs. Without Microsoft Flight Simulator 2020, I don’t think this would ever be a place I would acknowledge, nevermind taking in with my Saturday morning coffee.

There is an airport right between two sets of pyramids in Giza. If you circle a large radius around the area during the day, you will see several large pyramids just on the edge of the city. It’s amazing to see the physical lines between the desert and where people live. Additionally, this would be another terrific spot to watch the sunrise or set. The airport is large enough for most things, and the area is very flat. It should make for an easy place to visit. However, there is not much to see at night so go during daylight.