Dream, Die, Wake, Repeat. That you could say is the slogan of Dreamscaper. After all, it’s written right there on the game’s Steam store page.  Yet this is a gross simplification of the game’s basic loop, and it doesn’t do it justice.

We covered Dreamscaper: Prologue back in March of this year. The prologue was a free-to-play demo to give players a taste ahead of its August 14 release date. Dreamscpaer describes itself as a top-down rouguelite action RPG. The description also notes its challenging, yet satisfying, Souls-lite combat system. Continue reading below for Lords of Gaming’s first impressions of Dreamscaper.

The game follows Cassidy, a young lady from a small town called Backhill. She moved to a big city of Redhaven where she hopes to make it in the marketing business. However, the city’s fast-paced lifestyle and unfamiliar setting takes a toll on Cassidy’s mental health.

Although she meets tons of new people in Redhaven she feels lonely and isolated. The game essentially represents Cassidy’s battle on two distinctive fronts: the dream world and the real one. It’s a fight for the protagonist’s mental well-being. 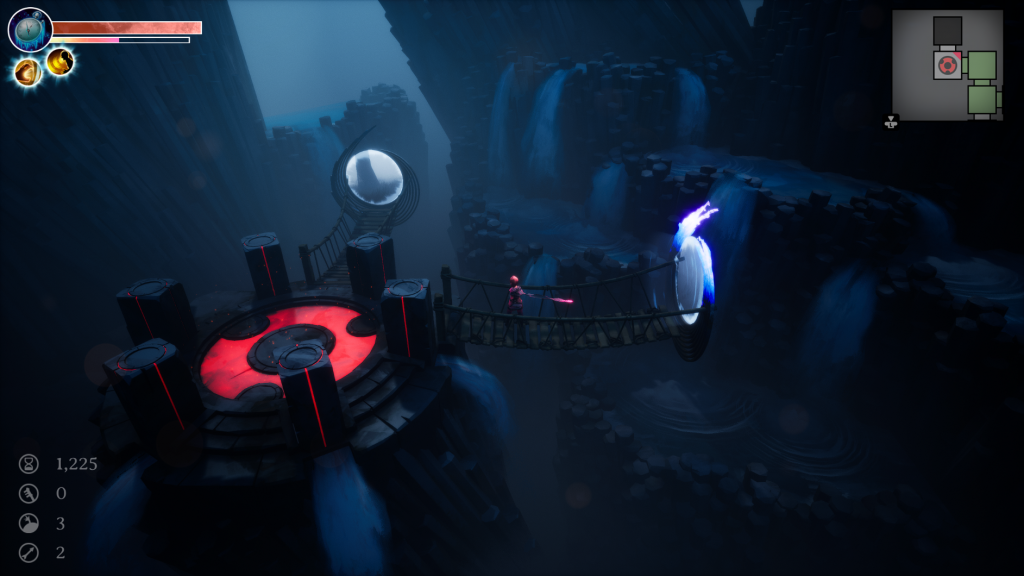 Like any self-respecting rouguelite title, Dreamscaper incorporates runs and permadeath. Except in this case, all the runs are procedurally-generated and perma-dying occurs in the dream state. Each floor, or Dreamscape as it’s known in the game, represents a segment of Cassidy’s memory.

She starts off in Backhill and makes her way to Redhaven and even a camping ground. Along the way, you’ll also encounter puzzle areas that reward you with either equipment or skills. In addition, you might also find stores where you can use dream world currency to upgrade your skills or refill your health or sand meter.

By filling the sandmeter, you can slow down time and unleash havoc on your nightmare enemies. It comes in real handy, especially on the more difficult floors. Some rooms will have random challenges for you to complete. If done so successfully, Cassidy will be rewarded with a perk or equipment. 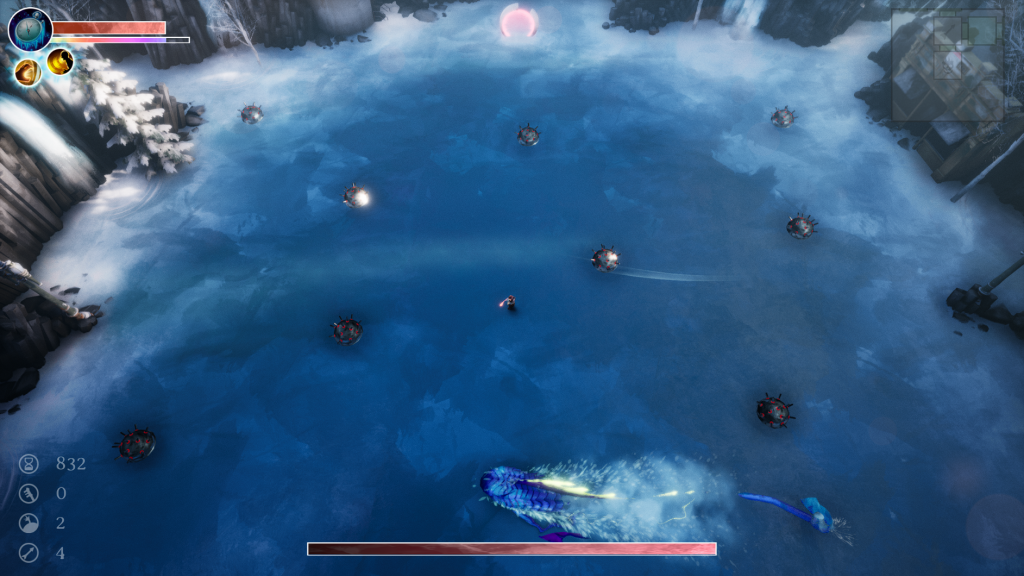 Some of the floors will have a boss fight that provides a good challenge. I’ve played Dreamscaper now for a few hours and haven’t gotten near the final floor. The game really picks up in the difficulty in the mid-stages.

Enemies become real tanky and damage sponges. Add multiple turrets and lava floors to the mix, and you have a dangerous recipe that could hinder your run progress in a heartbeat. This can get frustrating, especially if you got a really good run on. But this is a reality of a lot of roguelite titles out there. However, it doesn’t mean it’s not bothersome with limited gaming time. However, Dreamscaper does provide a couple of lifelines in the awaken state come in handy. 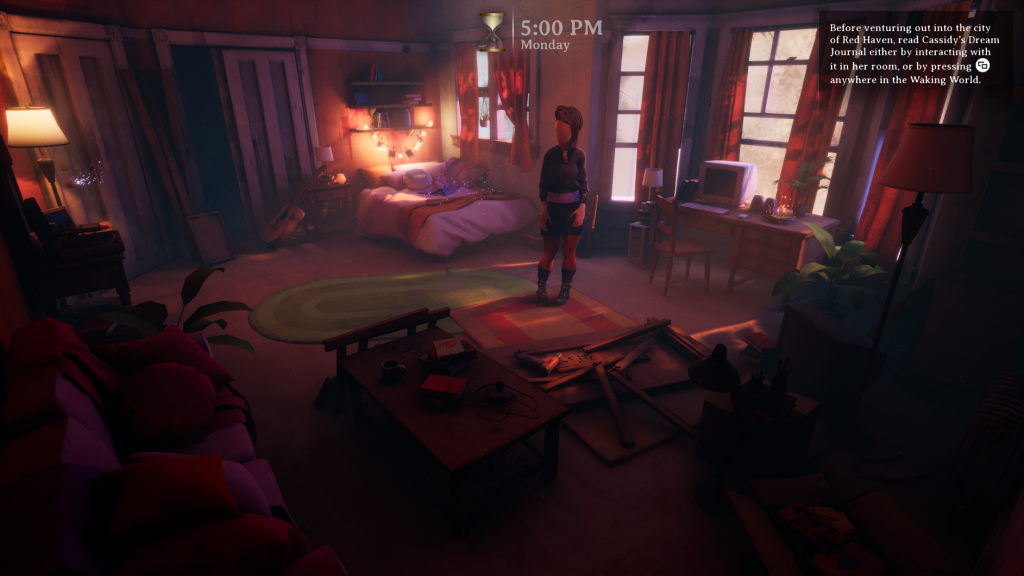 When Cassidy awakens, she always starts off in her apartment. It follows a typical cycle: beginning at 6 pm and ending by 9 pm. By this time, she has to return to her apartment and hit the hay and enter the dream world once again. But it’s also her apartment where Cassidy can use loot she found in the dream world to craft gifts for the different NPCs she encounters in the real world. And why would she want craft gifts you may ask? Simple, to help her combat her loneliness in the real world.

Cassidy can travel to a bar, cafe, and library where she meets different NPCs. By chatting them up and offering gifts that align with their interest, she can get to know them better. This increases their relationship with Cassidy which happens to unlock dreamworld goodies.

Some of the goodies include the ability to craft different weapons and equipment for your load out when you start a new run. This relies on dreamworld loot and is very important in order to save some time when starting from Backhill’s dreamscape again. Additionally, other relationship unlocks include passive upgrades like increasing critical or ranged damage. These upgrades are all permanent but you’re limited to selecting one at a time.

Dreamscaper is surprisingly polished for an Early Access title and controls are quite tight. Combat consists of normal/heavy attacks, two lucid power skills and a ranged attack. The game isn’t a button masher at all. In fact, when dishing out some melee combat, Cassidy will blink white and if you attack at that moment, it’ll give a small damage boost on your next attack.

Ranged attacks operate similarly to a twin-stick shooter, where you aim with the right analog and press the right trigger to fire. You can also dodge, block, and parry enemy attacks. These defensive maneuvers are very responsive and worked very well in the game.

Graphics and Art Style of Dreamscaper 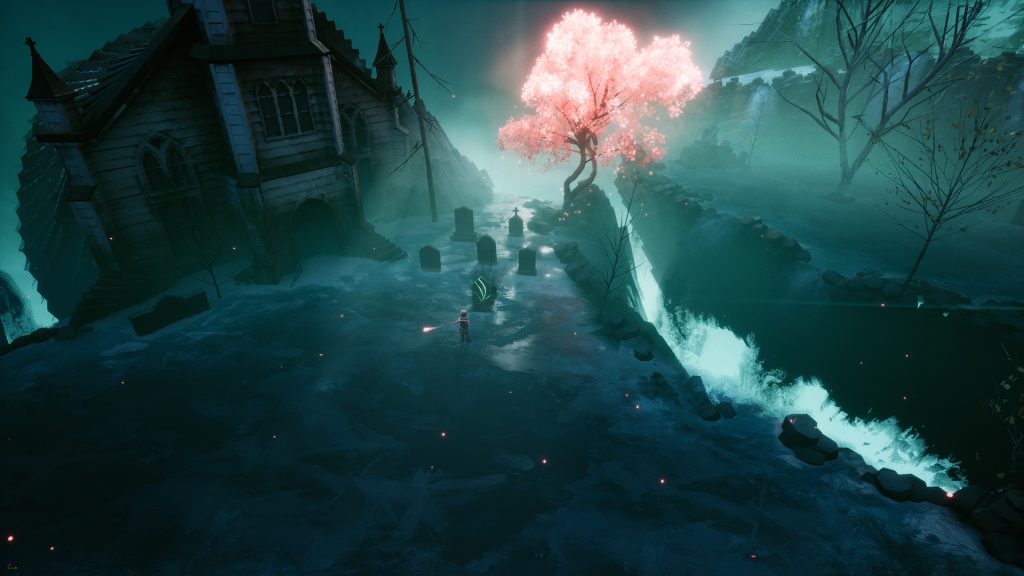 The game sports a simple, but gorgeous art style. All the characters are faceless avatars that look like wood mannequins you would normally see in art studios. The environments are varied enough to not get repetitive, and they also happen to be beautifully rendered as well.

For the most part, animations are smooth and consistent. And the game also sports a wonderfully realized color pallet in each floor. Also in the real world, the different locations look very authentic and lived in. Again, it must be reiterated that the game does not feel like your typical Early Access title. 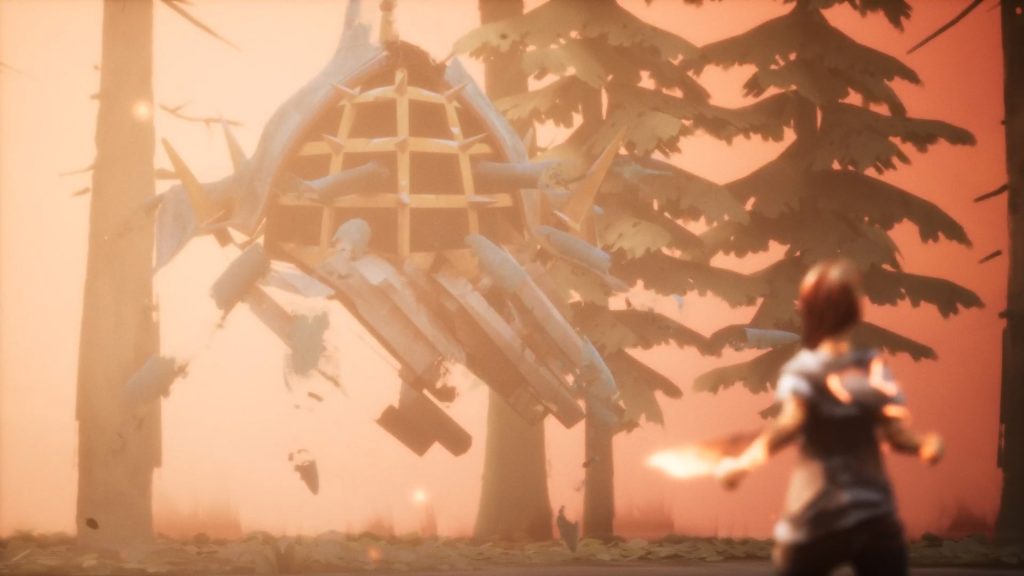 Dreamscaper is already garnering positive attention on Steam. The game charted well after reaching #3 in the Top Selling Early Access games chart on Steam (Canada) only a couple of days after its release. The game is regularly updated with quality of life (QoL) and bug fixes.

Developer Afterburner Studio also have a nice touch of thanking individual users for helping them identify certain bugs or QoL suggestions. It’s not much, but its a nice touch from a passionate trio that left the traditional games industry to pursue their dream project. In fact, every time you exit out of the game, a prompt encourages you to join the game’s discord server. This goes to show how much the developers appreciate their community and feedback.

I can confidently say that if you’re remotely interested in rouguelite ARPGs, then Dreamscaper might be up your alley. Though the game is not officially shipped, it has a solid foundation of good polish, tight controls and a response developer behind it. That goes a long way for any title trying to make it on Steam.