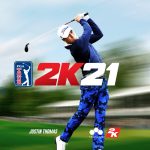 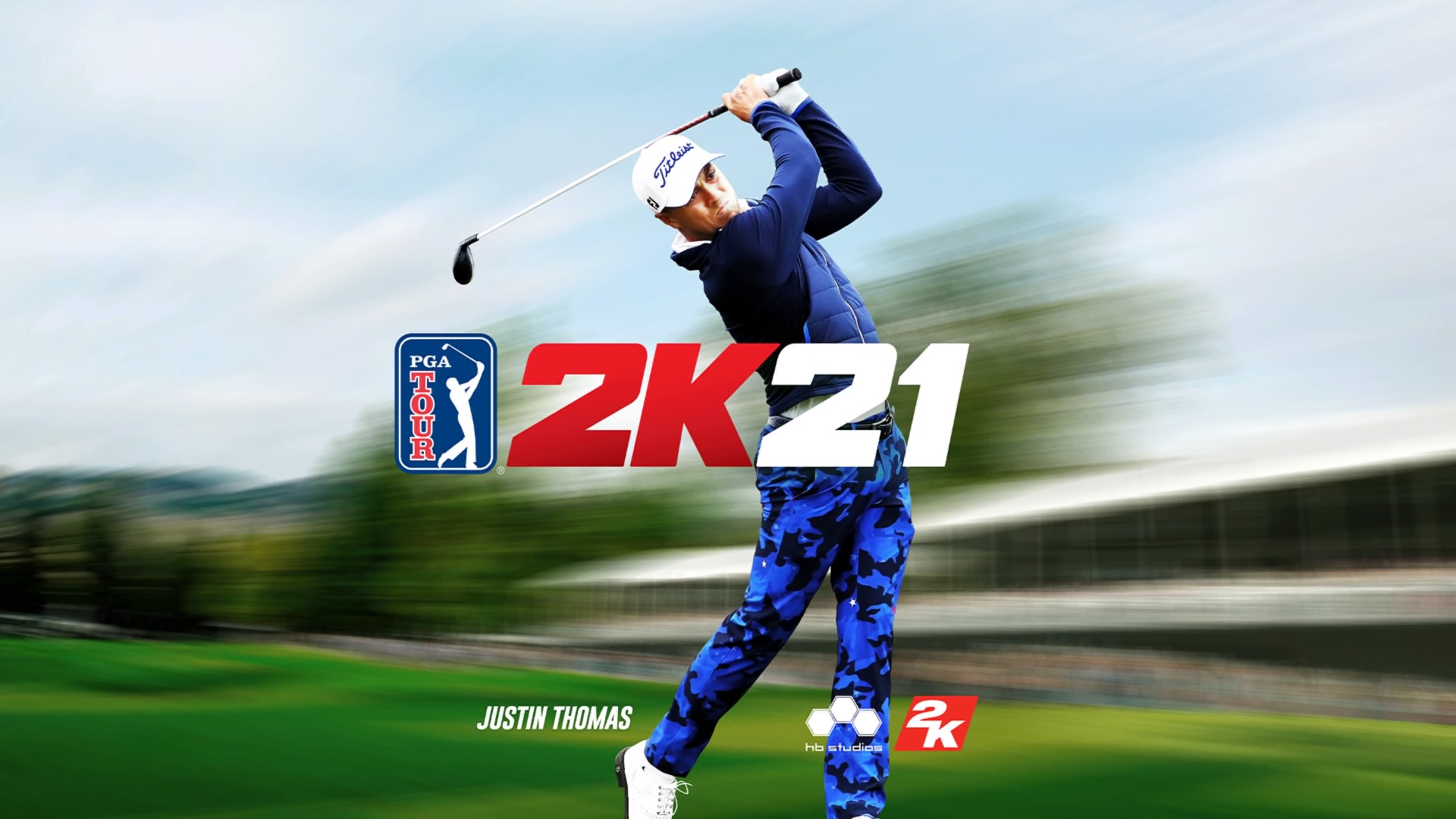 PGA Tour 2K21 is the evolution of the Golf Club series, also developed by HB Studios, in every sense. With its rebranding to be in line with 2K’s other sports titles like NBA 2K, PGA Tour 2K21 features a wealth of expanded and licenced features that make this golf simulator a heavy-hitting must-have for golf fans, and one that will keep you occupied for a long time. It reaches for a near faultless experience, but doesn’t quite make it there.

MyPlayer allows you to create and customize your golfer. You decide their name, gender, weight and height, as well as manipulating specific body parts, like nose bridge width. There are clothing pre-sets to get you started, too. What’s innovative about this in PGA Tour 2K21, however, is that you can use your created character in every game mode, whether online or offline. This allows you to create one golfer and follow their progress every time you play.

We mentioned clothing pre-sets — yes, they are drab and generic. You can upgrade them with in-game currency that you earn from simply golfing. This is where PGA Tour 2K21 shows its evolution. You can buy fully licenced goods: Adidas, Callaway, Wilson, all the major golfing brands are here. And it’s not just clothing, either. You can also buy branded golf clubs, too, and you buy them individually, allowing you to create your own perfect set of clubs to play with.

Following the new licenced theme, PGA Tour 2K21 has real golfers for the first time in the history of The Golf Club. Sergio Garcia and Justin Thomas are just two of the twelve real PGA pros present. There are fifteen licenced courses too, including TPC Sawgrass and TPC Boston. With all this new licencing, you get the sense that 2K is finally taking golf seriously. All these investments really pay off. It adds to the immersion when you’re standing on the links covered in official garb, brandishing your favorite driver and going head to head with the best real-life players. 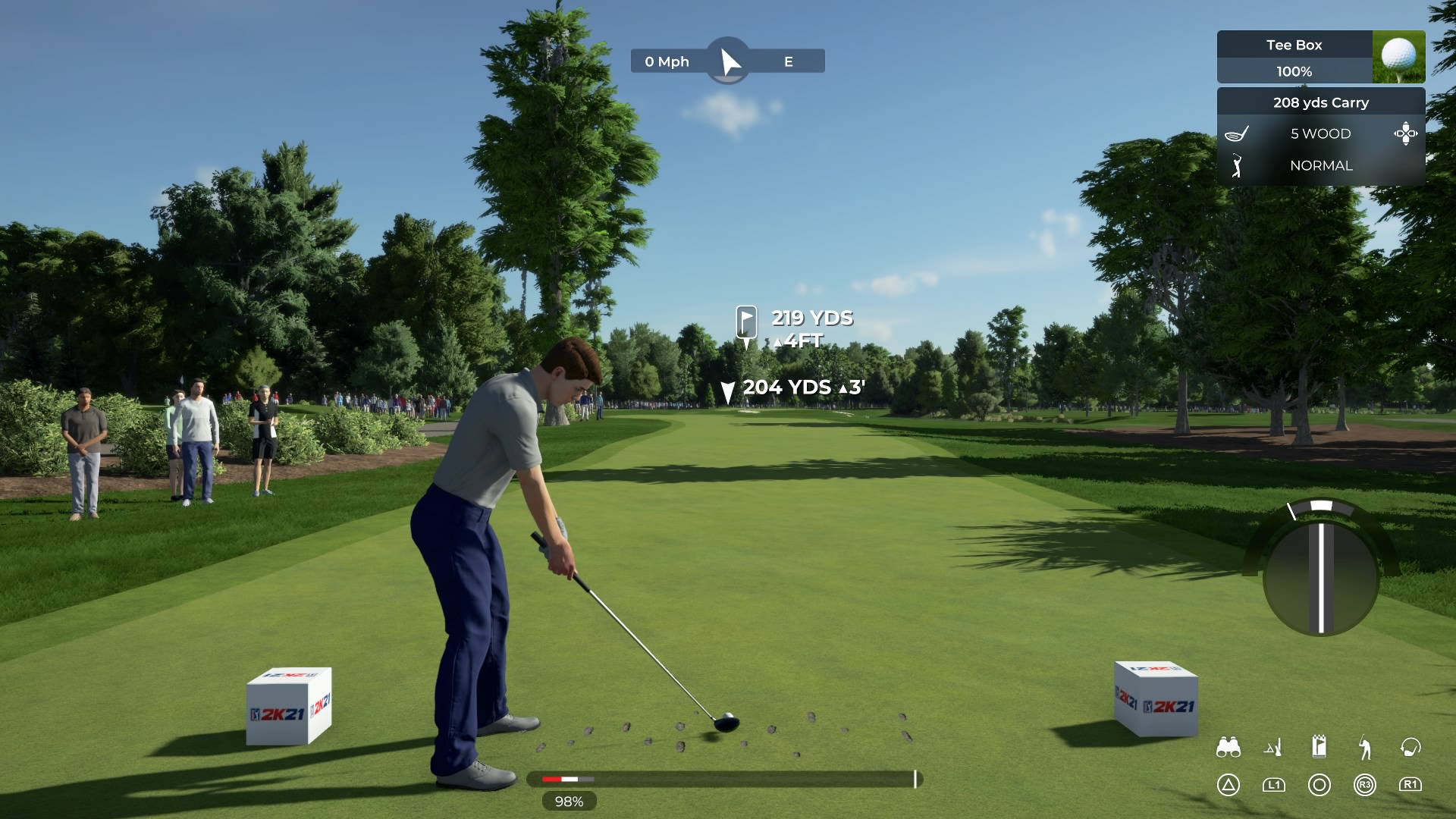 This game has a plethora of modes to help you while away time. However, before you choose any of them, you have to play the tutorial which launches even before you reach the main menu. And it’s a good thing, too, since PGA Tour 2K21 is one of the most realistic golf titles ever created. Your right thumbstick controls your golf club’s swing, while the left thumbstick aims your shot. The D-pad changes your club and shot type, and holding L1 (on PlayStation) allows you to add spin and curve to your shots.

When you’ve chosen your club and lined up your shot, you pull back on the right stick, and once you’ve reached the power level you want — shown on a meter in the corner of the screen — you push forward on the stick to follow through and hit the ball. This isn’t as easy as it sounds; however, as the game takes into account the direction and smoothness of your thumbstick movements. Push the stick left or right, even a tad, and you will send the ball careening into the woods or water; oops.

It’s quite obvious, then, that practice makes perfect. The simulation nature of PGA Tour 2K21 means that the more time you put in, the more you will get out. But luckily for those who want a more tame experience, there are many adjustments that you can make to the game’s difficulty settings. Not only are there CPU opponent settings, allowing you to change how well the computer-controlled characters play, but there are settings to adjust how much leeway there is in swinging your golf clubs. Turn the settings down to amateur and when you fluff a shot there won’t be such a bad penalty, for example.

All in all, there’s a very Dark Souls vibe to the game’s difficulty, meaning when a shot is bungled, you’re never left blaming bad controls or design. It makes you want to improve, to learn each hole on a course and its nooks and crannies. In most golf games, you set the shot’s power and forget about it; with this, every shot is tense. Will you slip the thumbstick and slice your shot? Will you pull back too slow and not get enough power? Like real golf, it’s about fluidity, practice, and experience.

The commentary is provided by Luke Elvy and Rich Beem, real-life golf broadcasters and commentators. It’s very good for the most part and does a great job of making it feel like you’re actually watching golf. They bring lots of life to the game, and when you’re lining up a tense shot they will whisper, adding to the immersion.

Real-life courses present in the game have been scanned for extreme accuracy, and they’re rendered with gorgeous graphics (on the PS4 Pro at least), with the lighting casting dynamic shadows over the green and grass and dirt flying as you take chunks out of the surface on a shot. And if you’re behind on the leaderboard, the tee is pitted from previous players’ drives. 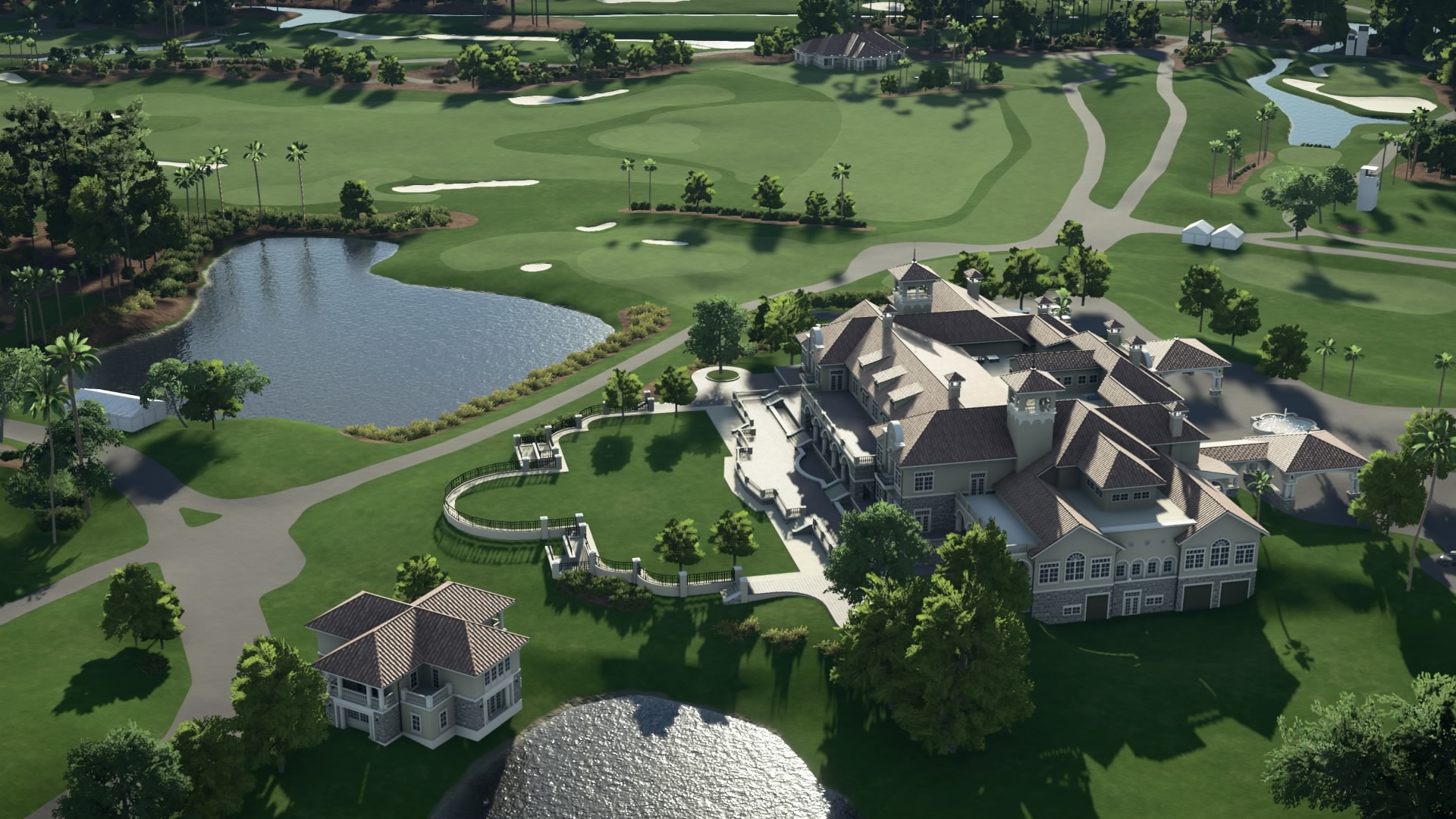 There are many single-player modes on offer. Hone your different shot types in training, which allows you to take lessons and practice with different clubs and shot types in a non-competitive setting. There’s also a quick play mode, allowing you to dive right into the action solo or with local multiplayer.

Finally, we have the PGA Tour career mode. This is where you’ll be putting in the hours in an attempt to win the FedEx Cup. You can choose to start at the Q-School or Korn Ferry Tour and work your way up. Alternatively, you can start at the PGA Tour proper if you wish. When you reach the PGA Tour, you unlock sponsors who give you missions. Complete these missions to unlock new items of clothing and equipment from said sponsor. Want some fresh new Adidas shoes? Complete the Adidas sponsor missions.

It’s also at this point that you unlock rivals, which is only fitting because you can’t reach the top level of play without putting a few noses out of joint. You will be assigned a rival, and at the end of each PGA Tour round your performance will be compared. Come out on top and you will be awarded rivalry points and additional currency. Thereby it allows you to unlock further goodies for your MyPlayer character.

Once you start putting in the hours with PGA Tour 2K21, you get the feeling that the single-player modes are just a prep school for the game’s multiplayer mainstay. Online and private matches allow you to get on the green with people from around the world. You can adjust settings and rules to suit your desired style of play. But by far the feature that will keep you coming back for more is the Online Societies. Like real-life golf clubs, you can join or create a Society, assign it an Admin, curate your own members, and hold events and tournaments. And this is where the game’s difficulty rears its head. Online modes are available in simulation difficulty only to level the playing field. This might turn away newer players, but die-hard golf fans will likely love it. Just like real life, it takes lots of practice to perfect your skills.

There is one last mode to discuss: the course designer. This mode allows you to create your own courses, much like Super Mario Maker. You can then share them with your friends and the community, and in turn play other player’s designs. You can add trees, plants, and wildlife to your course, as well as changing its layout completely. The sky’s the limit with this one. I foresee many goofy greens appearing to provide respite from the serious difficulty of other modes. 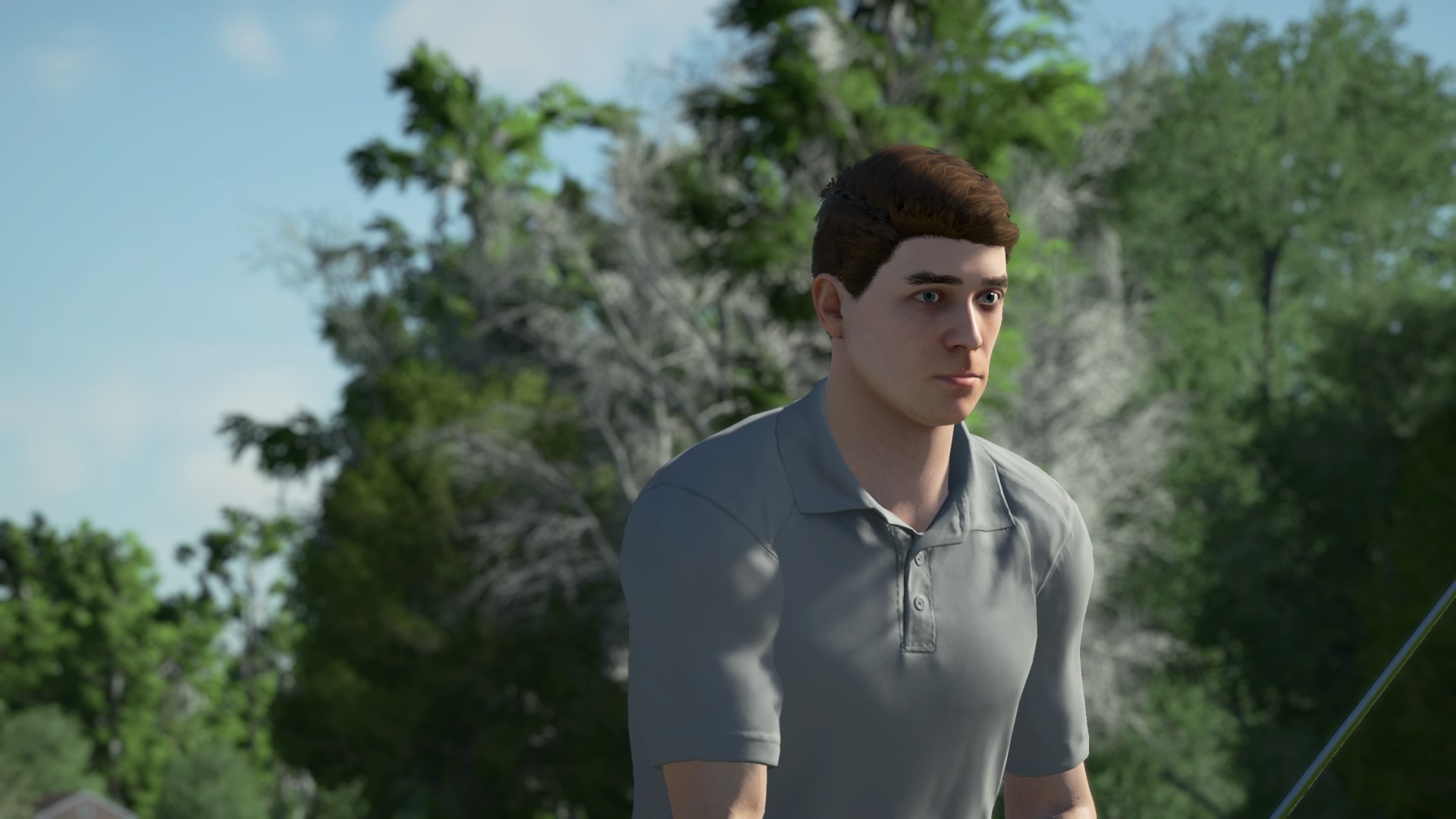 So far we’ve seen how PGA Tour 2K21 is a golf nut’s dream, but it’s not all smooth sailing. Character models are generally lifeless. Every time the camera switches to a cutscene between shots you’re treated to a view of your robotic MyPlayer rigidly walking around the links. This only worsens when looking at the background audience, who look like animated cardboard cutouts. It also applies to the animals you will see dotted around too. On the Louisiana course, there is a static alligator placed in the same location every time you play one hole, for example. You can’t help but feel that it might’ve been better had they left these immersion-breakers out entirely.

There is also the at times repetitive commentary. It will have you mashing the controller to skip over generic voice lines admonishing you for missing a putt. The commentators also refer to you with he/she pronouns. It adds a stilted nature to a title with such dedication to reality. In an age where other games — DiRT Rally for instance — have a giant list of names to pick from that changes the way commentators refer to you, this is inexcusable. Fortunately, none of these negative points are fundamental to the gameplay. They don’t detract too much from the experience. They are merely points to note for improvement in the series’ next iteration. 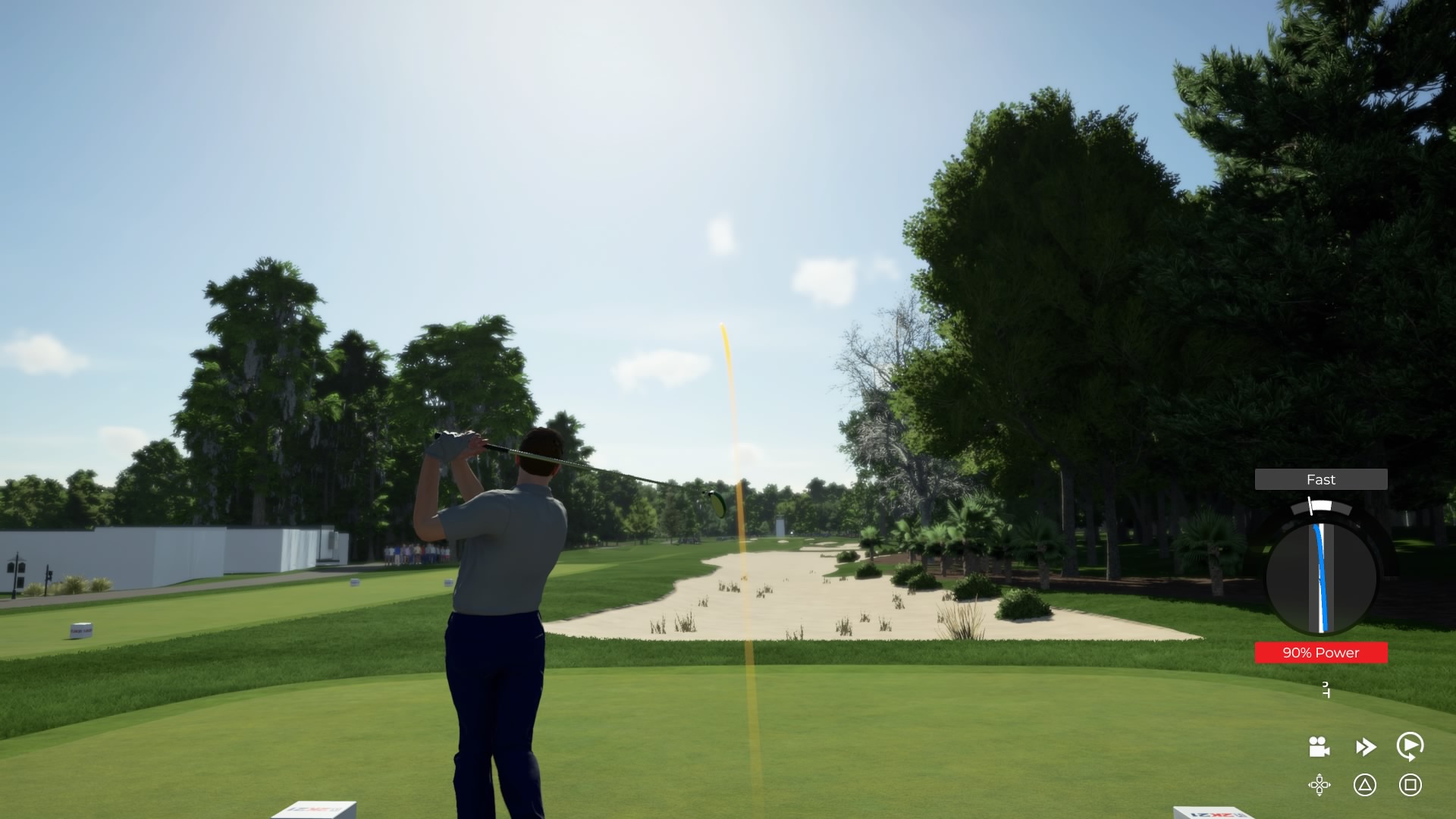 We started this review by saying that PGA Tour 2K21 is an evolution of the series’ Golf Club antecedents, and it’s true. It’s better in every way: licenced players, brands and courses; better customization; better gameplay and modes. There is no revolution here, but this feels like the culmination of all the efforts of HB Studios and 2K. They’ve created the ultimate golf game for the ultimate golf fans — it simply does everything right (bar some niggles). Newcomers looking for a more laid-back experience will still enjoy their time with the game but might find its serious online modes off-putting. Veteran golfers will lap up the unmatched golfing gameplay, revelling in the licenced products and real PGA opponents. PGA Tour 2K21 is a superb golfing experience that will keep fans occupied for a long time to come.