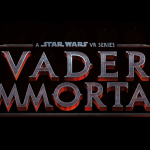 Vader Immortal: A Star Wars VR Series is an award-winning 3 episode adventure. The game made waves when it released on PC VR headsets back in 2019. In the game, you play a feisty smuggler smuggling goods just outside of Vader’s home planet of Mustafar. It is a unique experience that gives the player a look at the occurrences between Star Wars: Episode 3 and Episode 4. The game is canon in the current Star Wars universe as well. This game was only available via PC VR headsets, which is until today’s announcement.

During today’s State of Play live stream, PSVR fans officially got a release date for the upcoming VR experience. On August 25th, Vader Immortal: A Star Wars VR Series is officially coming to PlayStation VR. With the Star Wars movies on a bit of a hold due to COVID-19, maybe this will fill your need for new Star Wars content. Star Wars seems like such a perfect world to experience in the world of VR.

Will you be checking out Vader Immortal when it releases later this month? Let us know in the comments and don’t forget to check back for the latest gaming news and information.