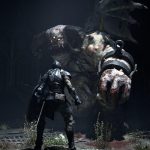 You are reading
Demon’s Souls Remastered Gets a New Trailer

Demon’s Souls Remastered is one of the most highly anticipated titles for the new PlayStation 5. The cult classic is getting a major facelift in graphical fidelity, animation, and most importantly, frame rate. The demon-infested world of Boletaria awaits those brave enough to face its inhabitants. The new trailer showed off the opening mission with looks at several later game bosses. Many fans of the Souls-series missed this when it first arrived as a PlayStation 3 exclusive. It is an integral part of From Software’s journey to one of the most renowned developers in the world.