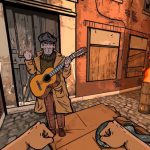 New Blood Interactive the small independent publisher behind games like Dusk, Amid Evil, and more. Has made a name for themselves for publishing retro-styled games, that not only play with retro aspects. But also bring a modern design sensibility to the game. With Thief inspired Gloomwood coming soon, it appears another game from the publisher might be catching PC player’s eyes soon with Fallen Aces.

Fallen Aces was revealed today at Realms Deep 2020. The new noir detective game from developers Trey Powell and Jason Bond. The game features 90’s comic art stylings mixed with FPS action. An eye-catcher, with its mafia, themed aesthetic, and noir sensibilities. You can check out the short trailer reveal for the game below.

Interested in Fallen Aces? Here is more information about the game from the official Steam store page.

Are you interested in Fallen Aces? Let us know in the comments and don’t forget to check back for the latest gaming news and information.