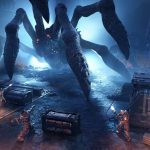 You are reading
Gears Tactics Lands On Xbox November 10th

When it was announced that Gears Tactics would be launching exclusively on PC. Many Gears fans were disappointed by this news. The long time Xbox staple franchise was getting a spin-off game and it would not be available on the console. When it launched, Xbox promised that console fans would not have to wait too long to get their hands on the game. Now in a surprise announcement, we know when exactly you will be able to play Gears Tactics on Xbox.

Today, in a surprise announcement by the official Gears of War Twitter account. They confirmed that Gears Tactics would be launching on November 10th, 2020. This coincides with the launch of the Xbox Series X and Series S. Which got official release and preorder information earlier today. The game will be available through Xbox Game Pass as part of your subscription and can also be purchased directly from the store page here. The game is also a Play Anywhere title which means if you purchase on console, you will also get the PC version for no extra cost.

And in even bigger news…#GearsTactics comes to console on November 10. https://t.co/wRcrGWoFAK

Will you be checking out Gears Tactics when it comes to Xbox on November 10th? Let us know in the comments and don’t forget to check back for the latest gaming news and information.