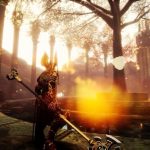 You are reading
Godfall Gets New A Cinematic Trailer

Godfall is the upcoming game from Counterplay games. The game is set to be part of the PlayStation 5 launch lineup. Officially releasing on PlayStation 5 on November 11th, 2020 and the game will release on PC on the same date. The game looks to combine third-person hack and slash adventure, with the ever-popular looter genre.

Today, Counterplay Games released a new cinematic trailer teasing a deeper look into the world of Godfall. As well as this, the game is officially available to pre-order on PlayStation 4. While the game will be exclusively available on PlayStation 5, you can pre-order the games 3 different editions digitally today on the PlayStation Store. These 3 editions are as follows. There is a $69 USD standard edition, as well as an $89.99 deluxe edition of the game. Then for the biggest Godfall fans, there is a $99 USD Godfall Ascended Edtion.

Along with this pre-order information a new cinematic trailer was released. You can see the full trailer below. The gaming looks incredibly beautiful, and will no doubt be a jewel in the PlayStation 5’s launch lineup.

Are you excited for Godfall? Let us know in the comments and don’t forget to check back for the latest gaming news and information.