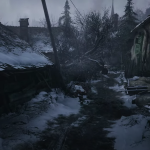 You are reading
Resident Evil: Village Gets A Creepy New Trailer

Resident Evil has made a massive come back in this generation without a doubt. From the success of Resident Evil VII, all the way to the remakes of the 2nd and 3rd games. There is no doubt that the franchise has had an impressive comeback for many of its fans. Capcom looks to continue this with the upcoming sequel Resident Evil: Village. While keeping the survival horror aesthetic, the game looks like it will be taking the franchise away from just killing the army of undead monsters. The game appears to want to focus heavily on atmospheric horror and getting under the player’s skin.

During today’s PlayStation 5 event we got a first look at a brand new trailer for Resident Evil: Village. The trailer oozes with dark and mysterious vibes with hints of a cult and magic at work. With teases of massive monsters and some horrifying imagery. The game looks like everything you would want in the sequel to Resident Evil VII. You can check out the full trailer for the upcoming game below. Resident Evil: Village will be coming to Xbox Series X, PlayStation 5, and PC in 2021. More details will no doubt be shared in the coming months.