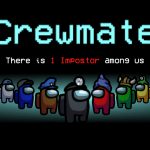 You are reading
Among Us: Common Impostor Mistakes

If you’ve spent time online lately, you might have heard of a game called Among Us. It is a party game that released in 2018 but has only recently taken the internet by storm. If you are familiar with the social game Werewolf, it is a similar concept: most players are innocent people, in this case, crewmembers. The crewmembers are trying to fix their broken ship. However, there is at least one impostor among them.  The impostor’s job is to try and kill the crewmembers without getting caught before they fix the ship.

Among Us is a game of deception and trickery, with the impostor having to rely on lying and outwitting the crewmembers to win. It is not an easy job, though. Crewmembers usually vastly outnumber the impostor, and they can work together to figure out who it is. If they figure it out and vote you off, it is game over.

That is why you need to avoid making mistakes. Mistakes are a huge way that impostors get found out and voted off by the rest of the crew. The problem is, some people do not even realize they are making them. This list of common impostor mistakes should help you live longer in Among Us so that you can better hunt your friends.

On every map in Among Us, there is a ventilation system. Everyone can see it, but there is one very important point: only the impostor can use them. Impostors can travel in the vents to get around maps quickly but misusing this ability is often an impostor’s downfall. The most obvious way to get caught with the vents is if someone sees you entering or exiting. As only the impostor can use them, it is a dead giveaway to whoever was your witness. It is not the only way to get found out, though.

Using the vents too much can be another red flag. Part of your alibis throughout the game will rely on other people having seen you around the ship. If you spend all of your time in the vents then no one will see you. This can lead to you getting accused of being suspicious very easily. On the flip side, not using the vents at all is a mistake too. While this one will not get you caught as easily as using them too much, it can really hurt your maneuverability. Avoiding them as a whole will cost you kill opportunities that you might have used to win.

To fix the broken ship, crewmembers need to complete tasks. These are mini-games scattered across the maps in Among Us that can include connecting broken wires, swiping an ID card, clearing a trash chute, and many more. The impostor in Among Us cannot perform tasks, but they are given a list of fake tasks. This is to better help them look like a productive crewmember to hide their identity. However, the handling of these fake tasks is often a way that impostors are caught.

For example: if you say you are doing a task in the communications room, make sure you know what tasks are actually in that room. Someone asking you what you are working on and you having no answer is a great way to get found out very quickly. So be sure to familiarize yourself with task locations around the map.

Another common problem with tasks is timing them incorrectly. There is a completion bar at the upper left of the screen during every match of Among Us. Every time someone completes a task – not just a step in a task – it goes up. This means that astute observers can notice the impostor just pretending to do tasks if they do not make sure to “finish” when the bar increases. 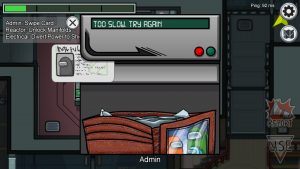 The common task of swiping your ID card.

There is one more mistake with tasks that is very common. There is a type of task called common tasks that if one crewmate gets, every crewmate has it. These include swiping an ID card, wires, boarding pass, and keys. Impostors often forget to pretend that they are doing a common task, which can easily give them away. So if you are the impostor and you see everyone going to do a task, make sure you follow suit.

As an impostor, lying is part of your job. One of the biggest mistakes that new impostors in particular make is not lying enough. In a social game like Among Us, usually voting for who is the impostor comes down to one player’s word against another’s. This means that even if another player catches you in the act of killing, the only thing the other players have to go on is their word. Convincing the other players that you are trustworthy and that other people are suspicious is most likely the only way that you will win. Just because a situation looks dire does not mean you cannot talk your way out of it.

Just remember: do not admit to being the impostor, always lie.

Besides the vents, there is another part of the game that only impostors can access: sabotage. Crewmembers need to fix the broken ship in Among Us, but that is not your job. As the impostor, your job is not to fix it – it is to make things worse. In the lower right-hand corner of your screen, you will have a menu called sabotage. This shows you a map of the playing field with buttons scattered throughout. These buttons let you do things such as lock doors, cut off oxygen, make the reactor meltdown, and more.

A well-used sabotage can be the difference between winning and losing a game, but many impostors do not use them. Make sure to use them judiciously so that you can separate crewmembers, cause chaos, and pull blame off of yourself. Emergency meetings to call for a vote of who is the impostor also cannot be called during any of the larger sabotages. This means that timing them right could save your life.

As the impostor, you are privy to more information than the rest of the crew. While you know which vents connect to each other, the rest of the crew does not. If you make the mistake of mentioning which ones go where, other players will likely find you suspicious. Be careful not to share your secret knowledge. The vents are not the only way that the impostor is privy to more information than crewmates. Impostors generally have a larger field of vision than crewmates. This means they can see further and may be able to see other people who cannot see them.

On top of having a larger field of view, impostors can also see in the dark. Cutting the lights is a sabotage you can use that will darken the entire screen. Be careful, though. Remember not to include seeing someone else in your alibi unless you walked right on top of them during lights out, because otherwise other players will know you can see. 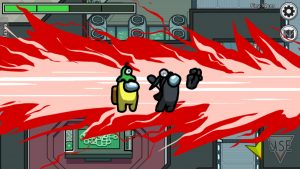 A death in Among Us.

Putting It All Together

Among Us is a great party game that promises a great time for you and your friends. Hopefully, with these tips, you will be able to do a better job as the impostor as well. Let us know in the comments if you have any other impostor tips.