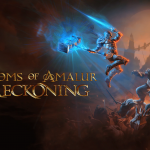 You are reading
Kingdoms of Amalur: Re-Reckoning Review

RPGs come in a variety of shapes and sizes. Whether they are CRPGs, JRPGs, or Action RPGs (ARPGs), one thing remains constant, they strive for immersion. Some games achieve this through narrative, graphics, or memorable characters. Other times, it is through a stellar combat system and deep dialogue trees. 2012’s Kingdoms of Amalur achieved its immersion on several fronts. It has a deep lore, developed narrative, and dynamic combat system. It was an incredibly ambitious game back in 2012, and replaying its remaster in 2020 has not diminished that impression. While some parts of Kingdoms of Amalur are greater than others, one thing remains consistent, it swings big. However, not all of those swings are hits.

From the get-go, the story is shrouded in mystery. Your custom-created protagonist (mine was a female Ljosalfar, or light elf) wakes up in a cart that is being hauled to an incinerator because you are presumed dead. Stereotypically, you are awoken with a bad case of amnesia. This in turn leads to a series of events that cast you as the Fateless One, a prophetic figure whose future cannot be read and can change their own destiny. This puts you in a precarious situation.

Assassins from the cultish Tuatha Deohn are dispatched to kill you precisely because of your newfound role. The Tuatha believe that your existence threatens their king, Gadflow. This sets up an intricate story, woven with central themes of destiny, fate, and choice. The narrative remained engaging throughout the experience. The depth of lore really shines and the worldbuilding feels authentic. That is largely due to acclaimed novelist R.A. Salvatore who helped create the game’s universe and lore.

Re-Reckoning comes packed loaded with additional content. The remaster comes with the game’s original two DLCs called The Legend of Dead Kel and Teeth of Naros. Both of them add new areas to explore and quests to follow. In addition to that, the game will get an entirely new third DLC chapter called Fatesworn. However, the third DLC is not available at launch and will release sometime in 2021.

Oh So Many Factions & Characters

It must be said that Kingdoms of Amalur does a great job of world-building. From early on, the game introduces you to a world filled with politicking factions such as the House of Ballads, Scholia Arcana, the Warsown, Travelers, House of Sorrows, and more. Naturally, you can join any faction at any time. Though, there is no real penalty if you join multiple factions that force you to a “us or them” decision. That can be considered a missed opportunity. Regardless, these various factions add considerable depth to Kingdoms of Amalur’s lore.

Throughout the game, you will enlist a motley crew to help you in your quest. From the drink-friendly fateweaver Agarth to the mysterious Alyin Shir, Kingdoms of Amalur is not short of unique NPCs. For instance, you can immediately tell Alyn and the player character have history, but she remains aloof of that relationship. While Milou, the gnome butler and healer, appreciates his indentured servitude to you after you acquire the villa he works in. Personable NPCs help create more memorable characters in a game. While the game does a great job of including a variety of characters, sometimes the humor feels forced.

These characters overly try to be funny to the point it comes off as insincere. For example, Agarth admitted he is drunk the first time he first tried to read your fate. Another instance again involves Agarth when he joked he should have brought another bottle after discovering a Nisraku demon. It attempts to lighten up the game’s overall mood but comes off as forced. It is unfortunate, but I feel that is a consequence of the dialogue delivery, which is competent, but nothing to write home about. 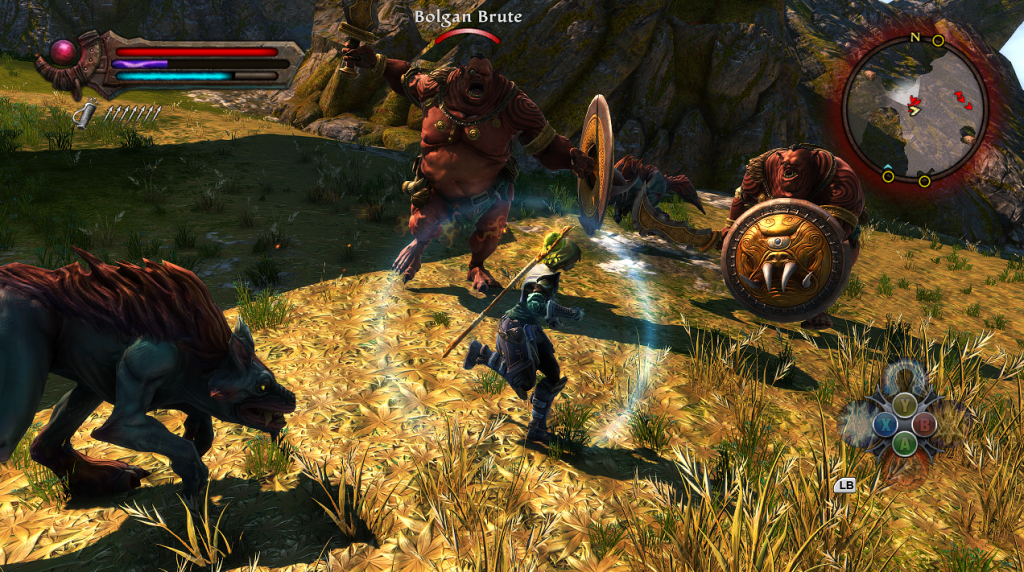 Visually, Re-Reckoning’s graphical gains are a boost for console versions. Texture quality received a substantial improvement. The game overall just looks cleaner with its up-ressed presentation. Weapons and armor sets are well detailed and look immaculate. Though it must be said that on the PC version, the jump is more modest besides the higher quality textures. The game still suffers from pop-in and jutter. Some GPUs features also already clean out textures on their own, so the graphical upgrade on Re-Reckoning’s PC version is marginal at best. With that said, I feel that the remaster is better realized for consoles.

The environments feel just as animated and rich as they first appeared in 2012. You will encounter a plethora of landscapes throughout Kingdoms of Amalur. From vast forests to sweeping dunes and sprawling magical cities, the game offers a massive open world. This also helps alleviate any repetition, which is always welcome in a sandbox game.

Animations for the most part are smooth, though when mixing different attack types there is some rough stuttering. For instance, casting magic then whipping out your bow for a quick strike does not feature the smoothest transition. Luckily, it is not too distracting.

Facial animations are stiff and facial hair often looks like it was pasted on. In addition, you can easily tell that the game was not motion-captured and animations were done by hand. This gives characters a rather robotic look during dialogue scenes. On the flip side, one thing that did not get remastered is the bugs. 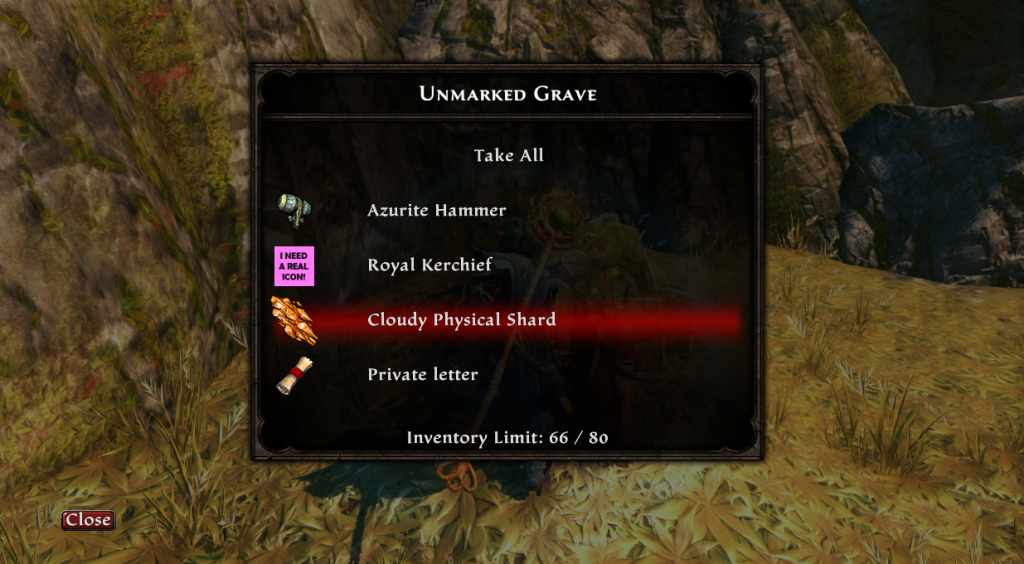 Like many ambitious open-world games, Kingdoms of Amalur is rife with bugs. From the infamous icon bug pictured above to invisible bows, the game was rough around the edges and remains so in 2020. Sometimes, even the camera acts up. Occasionally, it pans in a little too close for comfort during dialogue sequences as you can see below. 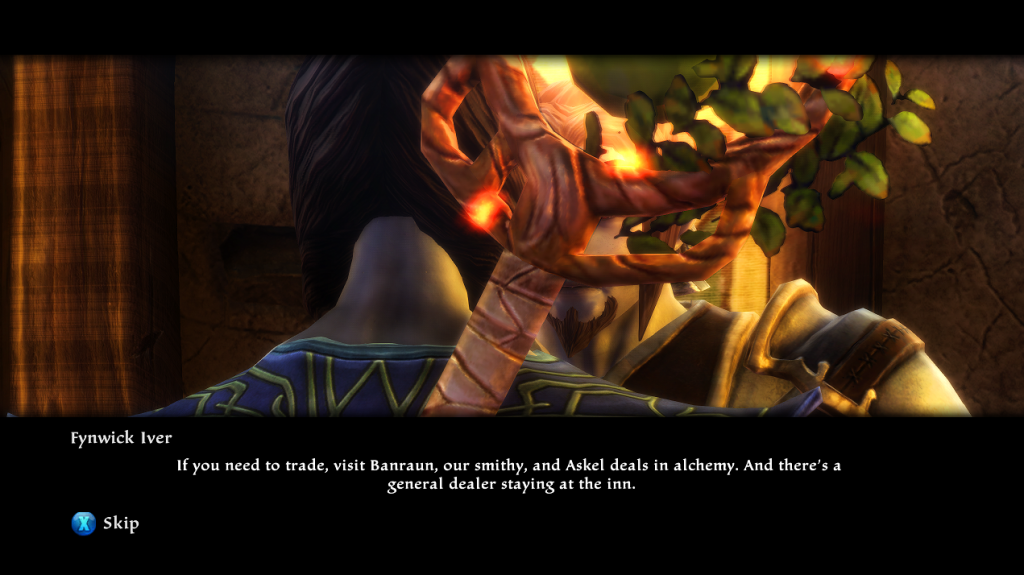 In many cases, boss fights often end anticlimactically with a shallow thud. It really detracts from the sense of overcoming a tough enemy. For example, when I fought the demonic Niskaru, it was a tough encounter. The very last strike gave off a very awkward sound effect. It was like a hallowed out thud and then all of a sudden the game cuts into a dialogue scene after the boss fight. These oversights and bugs could be attributed to their ambitious vision. But these missteps can be overlooked because the game makes up in other areas such as combat. 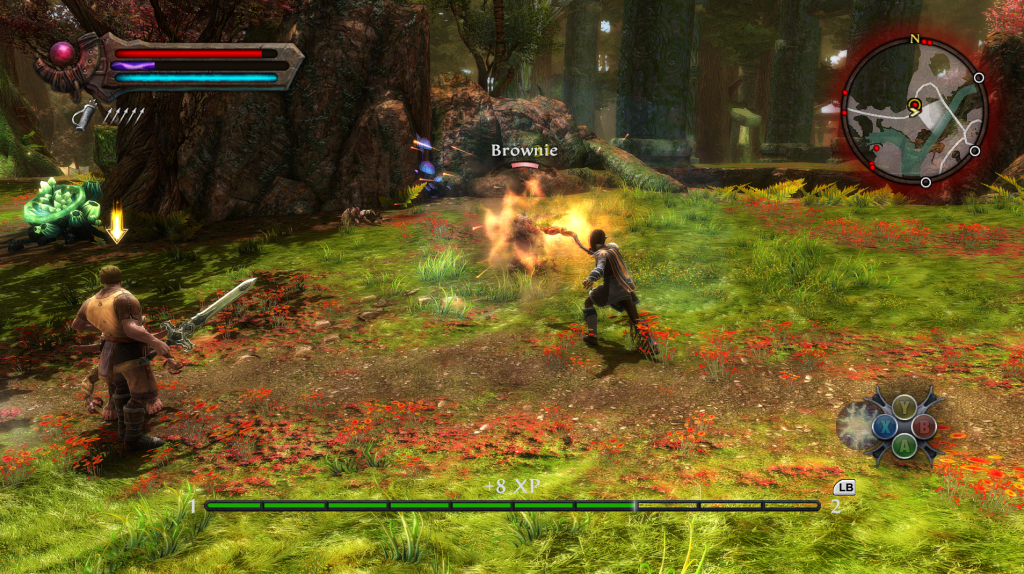 Kingdoms of Amalur’s combat shines throughout the experience. It is a third-person ARPG, so it involves a lot of typical tropes such as close and long-range attacks, magic, dodging blocking, and parrying. Combat is very satisfying for the majority of the game. The game controls are tight and responsive, which adds to the satisfying combat. But, it was clear from the game’s control scheme that it was ported over to PC from consoles.

From quick-time events to button mashing and awkward use of using secondary attacks on keyboard, it was clear that the studio had a controller in mind. While the game is not difficult, the inclusion of new difficulty levels in the remaster is welcome. In fact, setting the difficulty to higher levels give the combat a bit of a Dark Souls flavor, albeit without a stamina bar. The game also benefits from the new combat camera, which slowly pans out during intense fights. It is a great feature that adds a more cinematic feeling to combat.

Surprisingly, there are a variety of move sets for different weapons. These contextual moves include holding down the attack button or attacking when blocking. This helps keeps combat fresh, but its usefulness is really up to your character’s build. You can enter Reckoning mode which empowers your attacks and is concluded with a quick-time button-mashing prompt that nets you extra XP. However, towards the later stages of the game, the combat’s fun factor tapers off because you will likely become overpowered. This reduces enemies to minor inconveniences at best, regardless of build choice, where choice is the key word. 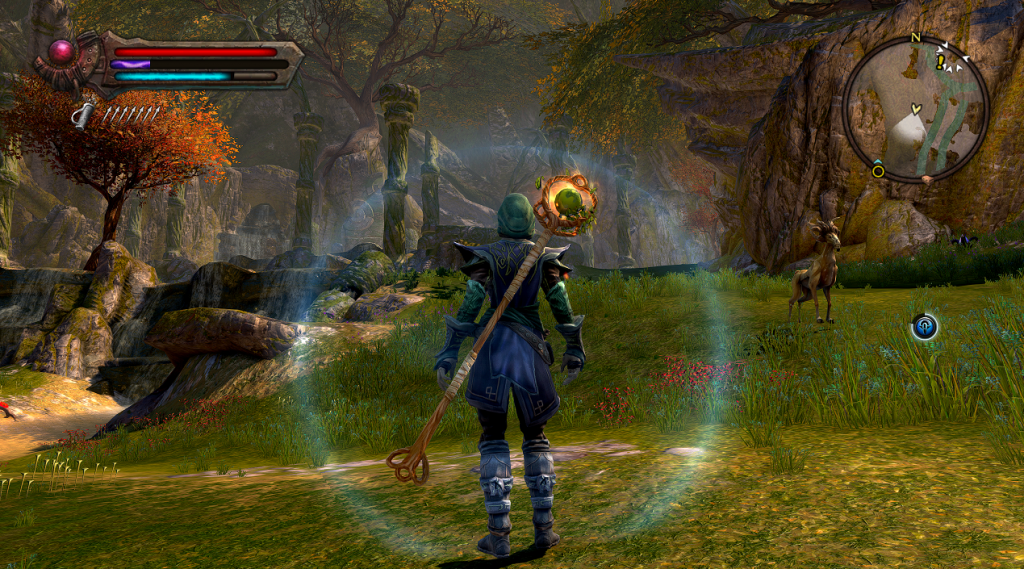 Kingdoms of Amalur features three different skill trees for might, finesse, and sorcery. Every level lets you allocate three points in any tree of your choosing.  Every skill tree contains both passive and active skills. You can map active skills and unleash them in combat.

Unlike other RPGs, players begin the game classless and slowly mold your build.  You can mix and match to your preferred playing style. Want to be a warrior with an affinity for magic? Or a mage with a handy bow? You can do so in Kingdoms of Amalur. These custom classes are known as destinies and you unlock them based on where you spend your skill points. Destinies provide extra buffs and debuffs, or you can opt out of choosing entirely. The game highly encourages experimentation as you can always re-spec at fateweavers to really hone your build. 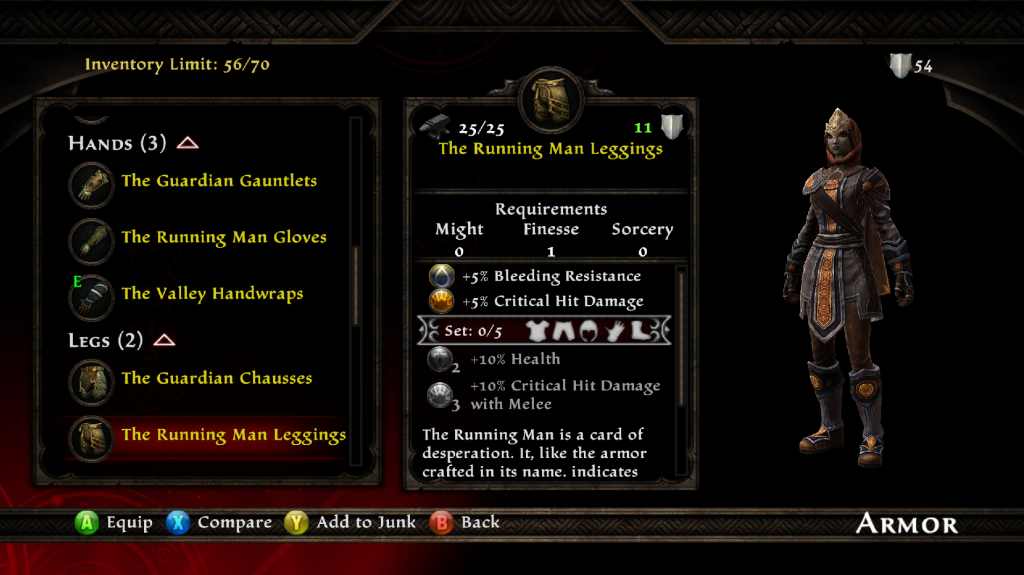 Kingdoms of Amalur is also rich in rarity-tiered loot and weapons. There are swords, greatswords, hammers, fae blades, staves, scepters, longbows, and chakrams (like the ones from Xena Warrior Princess). I personally enjoyed magical attacks so I stuck with staves most of the time. I would also use longbows to help debuff and pick off enemies from afar. While there is an immense amount of weapon diversity; unfortunately, the weapon designs are limited. Sometimes, this makes a level 3 hammer indistinguishable from a level 29. Meanwhile, armor can get a little more varied when it comes to designs, but not by much.

You can craft gear and create gems to socket in your gear, provided you have the required talent levels. Socketing gems is useful if you remember to craft them. However, blacksmithing and alchemy feel undercooked and are very much an afterthought given how much loot you get in the game.

The Façade of Choice 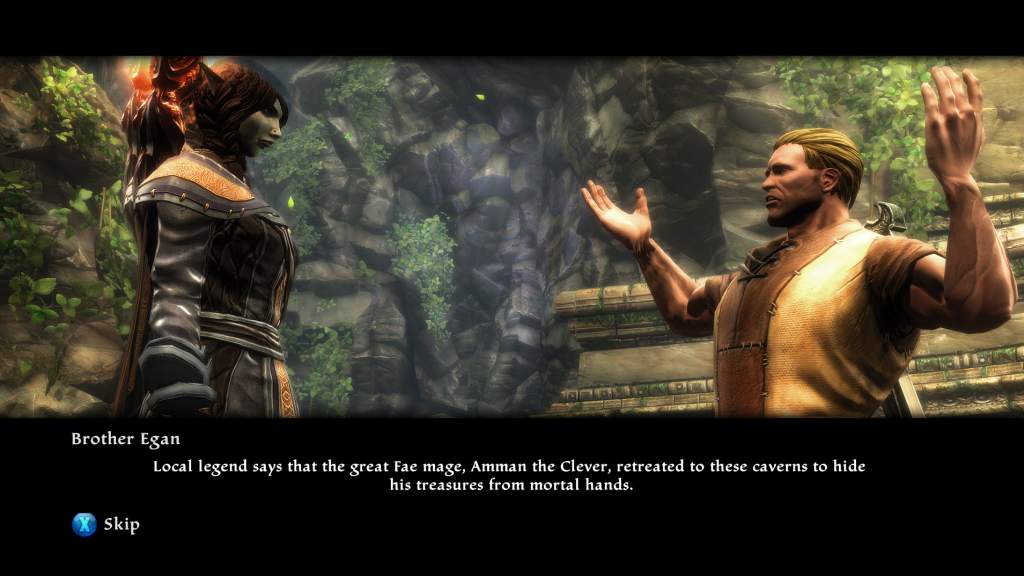 It is clear that Kingdoms of Amalur takes notes from Mass Effect’s dialogue system. In fact, the radial dialogue choice wheel looks exactly like Mass Effect‘s. The different choices might prompt different reactions to the person you are talking with. However, do not expect your dialogue choices to have any meaningful impact on the game’s narrative. In fact, dialogue choices are shallow at best. They can be fun, especially if you invested in the persuasion skill. This allows you to easily manipulate people you are conversing with. But it can be a slight time saver by helping you avoid combat in certain situations. Again, it seems that your dialogue choices do not really matter.

It is painstakingly clear that Kingdoms of Amalur was heavily inspired by popular RPGs of its era. From Souls-like combat to Mass Effect-style dialogue choices, the game takes different bits of popular titles and combines them in one package. The game is highly ambitious and that is evidently clear from the start. However, technical issues and half-baked mechanics really keep it from greatness. Luckily the game is not a jack of all trades master of none.

The story and lore are well conceptualized, combat is engaging, and the leveling system is deep and warrants experimentation. The remaster is better realized on the consoles, who benefit from better textures, higher resolution, and a more intuitive control scheme. The inclusion of the game’s DLC just adds additional quality content to an already expansive experience. If you missed Kingdoms of Amalur back in 2012, I implore you to not miss its remaster in 2020.

8.3
A Solid Action RPG Not to Be Missed