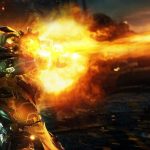 As we begin our journey into the next generation of consoles, many publishers have been laying out their roadmap. This roadmap gives players an idea of what they can expect from these in the next generation. Will they get a free next-generation upgrade like with the Witcher 3? Or will upgrades be put behind an upgrade cost like with the Control Ultimate Edition. People Can Fly the studio behind the upcoming looter shooter Outriders had some important next-generation news to share.

Outriders Focusing On Bringing Players Together

In a new update on the games’ official Twitter account. People Can Fly revealed that they will be taking a very player-first approach to the game. The first and most notable feature is the fact that crossplay will be a major focus of the game. Whether your friends play on current generation consoles, next-generation consoles, PC or Stadia. You will be able to link up and battle with your friends no matter what platform. This is a great first step in building the games community in the future.

The developers also revealed that a free next-generation upgrade will be available no matter the platform. PlayStation 4 owners will be able to upgrade to a PlayStation 5 copy. Xbox players will be able to upgrade their Xbox One copy via smart delivery. This is a brilliant move by People Can Fly. The shooter looter genre is a very competitive field. With a variety of different games from Destiny 2 to Warframe. Outriders look’s to be a different take on the genre, and these moves will certainly resonate with players in the future.

▪Smart Delivery from Xbox One to Xbox Series X|S

Outriders will be coming to Xbox, PlayStation, PC, on February 2nd, 2021. Will you be playing Outriders day one? Let us know in the comments and don’t forget to check back for the latest gaming news and information.