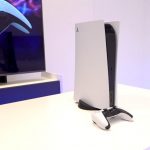 Japanese YouTubers got some hands-on time with the PlayStation 5 during a media event in Tokyo on October 4. Multiple videos hit the internet soon after showcasing the console’s SSD, its controller, and more.

Information on the PS5 experience has been funneling in from Japanese media outlets. Dengeki Online reports they were able to play two launch titles for the PS5: Godfall and Astro’s Playroom. The article goes into the gaming experience playing Astro’s Playroom and the controller’s response to on-screen activities. They specifically mention the controller’s features highlighted by Sony before, such as the adaptive triggers and haptic feedback. “Regarding the controller again, it is bigger and heavier than PS4 due to the addition of functions and the increase in battery capacity in terms of size and weight, but it is surprisingly light when you actually bring it!” says the article.

Other details have surfaced on the PS5 controller, such as the light bar. Sony has definitely went for a more subtle approach as opposed to the PS4’s light bar. Reportedly, the light strips will change and highlight which player you are in a game.

The #ps5 dualsense have 4 little lights bellow the touchpad, this appear to be to show you what player you are (1,2,3,4) pic.twitter.com/AOvbpKUO3B

Also wanted to add that the #PS5 Duelsense controller :
– lights up in different colors like DS4
– it also has little strips of light that indicate which player you are on the system pic.twitter.com/hOKG5YgbWK

Another interesting fact: Sony is changing the confirm button for all regions to be the X button. For those unaware, Japanese PlayStation controllers previously used O to confirm for over 20 years. “In Japan, the ‘Circle = Good, OK, Correct’ symbolism has been common knowledge for many decades,” says VR developer Kenji Iguchi. In the West/North America, the confirm button on PlayStation consoles has been X, symbolizing as “X marks the spot.” This could be a point of contention for Japanese players and any region that adopted the “O to confirm” model. The entire player base will have to go against muscle memory, which can probably be frustrating at first.

Heating and the PS5’s SSD

Dengeki Online went into detail about how the console tackles heating. Per the report after some play time, “Finally, when I touched the main body, I didn’t feel much ‘heat’… It seems that there is no need to worry about the heat exhaust structure.” Fans in consoles are infamous for being loud, especially after some years of use. From the get-go the PS5 has been reported to be quiet throughout the Japanese YouTubers’ gaming sessions.

As for the SSD, Dengeki Online says their experience has been positive. Continuing after deaths, fast-traveling, and loading are much smoother and extremely fast.

Check out 8 minutes of Godfall gameplay below:

Take a closer look at the console here:

As far as new information comes, there’s not much to dive into. We have been hearing the benefits of the SSD and the features of the console for a few months now. The fact that the system stays cool is a good sign for gamers who like to do long gaming sessions. New gameplay of Godfall, Astro’s Playroom, and Devil May Cry V highlight the console’s quick loading and high-quality graphics output. The media drop is a nice change of pace from Sony’s track record of secrecy.  There are still questions regarding backwards compatibility, save transfers, storage options and more. Hopefully this media event is the change of pace fans and consumers have been waiting for.

PlayStation 5 is set to launch on November 12 in the United States, Australia, Canada, South Korea, Japan, Mexico, and New Zealand. Europe, Middle East, South Africa, Asia, and South America will be getting the console on November 19.