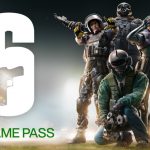 It should come as no surprise that Rainbow Six Siege would find a home on Xbox Game Pass. After all, several ‘games as a service’ style games have found major success here. Over the past few months games such as The Elder Scrolls Online, Fallout 76, Ark: Survival Evolved and others have grown communities from this implementation. Ubisoft looks to copy this success by bringing one of it’s most popular games to the service.

What originally started as a tease, the Xbox Game Pass twitter shared a not so cryptic tweet.

A castle, with a six banded rainbow over a castle being, well, sieged?

Over the past 12 hours, the game was confirmed to be coming to Xbox Game Pass for both console and Android users (via the cloud service) on October 22nd. This comes also after information that the game will run at a native 4k with 120FPS on Xbox Series X. The PlayStation 5 will also receive these upgrades.