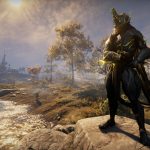 You are reading
Warframe is Getting a Next-Gen Engine

Warframe is a very popular and one of the best free-to-play looter-shooters. It was released in 2013 for Microsoft Windows and the PS4. It was followed by an Xbox One release a year later. Up until now, it never received any kind of upgrade for PS4 Pro and Xbox One X. But now, not only is it getting a next-gen console treatment, but Warframe is getting a next-gen engine treatment as well.

Coming from Warframe staff, Digital Extremes is phasing out their old Warframe engine. Warframe’s old engine has almost all the lighting pre-baked in order to keep the CPU/GPU cost low, but with the new one, they will be doing a lot more dynamic lighting. Here is what the developer said:

Enhanced is a complete redesign to achieve more accurate reflections and give us the ability to utilize dynamic lighting and shadowing across the entire game.

This is where the new rendering engine excels. It renders out the attributes of the scene (colors, glossiness, shape) to offscreen buffers. After this, proper dynamic lighting costs hardly more than those terrible glow sprites we’ve used in the past. For realtime shadows, what the light sources ‘see’ are cached and reused when nothing changes. All lighting and reflection probes are stored in a 3D camera voxel texture and applied in single passes where the costs grow linearly, proportional to their size on screen, without incurring huge CPU and GPU penalties to ‘draw the whole world, again and again’.

The developer promises to optimize the end-result in a way that it can run on toasters and microwaves too. So the GTX960 owners should not be worried. You can already try the new engine features yourself, but the developer warns it is a work in progress.