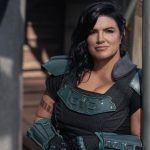 You are reading
Gina Carano Will No Longer Play Cara Dune

The actress behind the character Cara Dune is no longer part of Star Wars. Gina Carano has been let go from her acting role in The Mandalorian.

Gina Carano played the character Cara Dune for two seasons on The Mandalorian. At first, fans fell in love with her brash character. That is until she started posting controversial social media posts online. She continued to walk the line of being unemployed for quite some time. That is until she posted some extremely offensive posts this past week. It was the final straw for Lucasfilm.

A Lucasfilm source told Variety the reasons behind the firing.

Gina Carano is not currently employed by Lucasfilm and there are no plans for her to be in the future. Nevertheless, her social media posts denigrating people based on their cultural and religious identities are abhorrent and unacceptable.

Will anyone miss her?

While she will be missed by some, Cara Dune felt like she had hit a wall. Even though The Mandalorian spin-off Rangers of the New Republic was going to supposedly have her in the show. It really isn’t that big of a loss. We live in a time where we need to be coming together as one. Not posting offensive material about past events. If Gina Carano looks familiar you may have seen her in Deadpool as Angel Dust, a super-strong mutant that almost beat Colossus.

It will be interesting to see what happens in the next few days. For the most part, Gina Carano has never really apologized for her past comments or posts. Now that she has lost a dream job, she may be a little more apologetic now. While the third season of The Mandalorian has yet to begin filming. The Book of Boba Fett has to film first so if Lucasfilm has to change any story related to her character it shouldn’t affect anything.