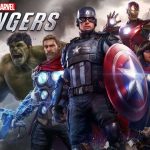 On March 18th, Marvel’s Avengers game will receive a next-generation patch for PS5, Xbox Series X & Series S. We already knew we would get native 4K support and improved framerate but now developers have released a full list of improvements.