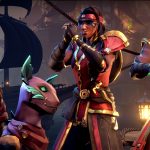 You are reading
The Plunder Pass Needs Tweaks to Succeed

Dread it, run from it, season passes arrive all the same for games as a service. Sea of Thieves officially moved to a seasonal content structure last week. Rare Ltd. named their pirate sandbox’s season pass the Plunder Pass, aptly named for a game all about pirate loot. Despite the popularity of the season pass model, Sea of Thieves resisted this for nearly three years. Instead, Rare made the occasional, but sizable, content updates. Major updates like ‘Forsaken Shores’ and the massive ‘Anniversary’ update kept longtime players and gathered new ones. Now with the Plunder Pass, Sea of Thieves gracefully changes their content format, but they still need to tweak it.

Even though Sea of Thieves costs $40 (USD) or an Xbox Game Pass subscription, the Plunder Pass shows how free games should design season passes. As shown in the screenshot below, the Plunder Pass has 100 levels of Renown, each with at least one reward. These rewards range from cosmetic to currency of all kinds. You may notice some have gold backdrops and are locked (see light blue highlights). Those are Pirate Emporium premium rewards. The Pirate Emporium is Sea of Thieves in-game cosmetic store. There are only eleven of them in the Plunder Pass, and according to Rare Ltd., the premium rewards cost about $40 in the Emporium. At first, this seems like a great Season Pass; most content is free, so what’s wrong? Well, how does this value compare to other season passes? 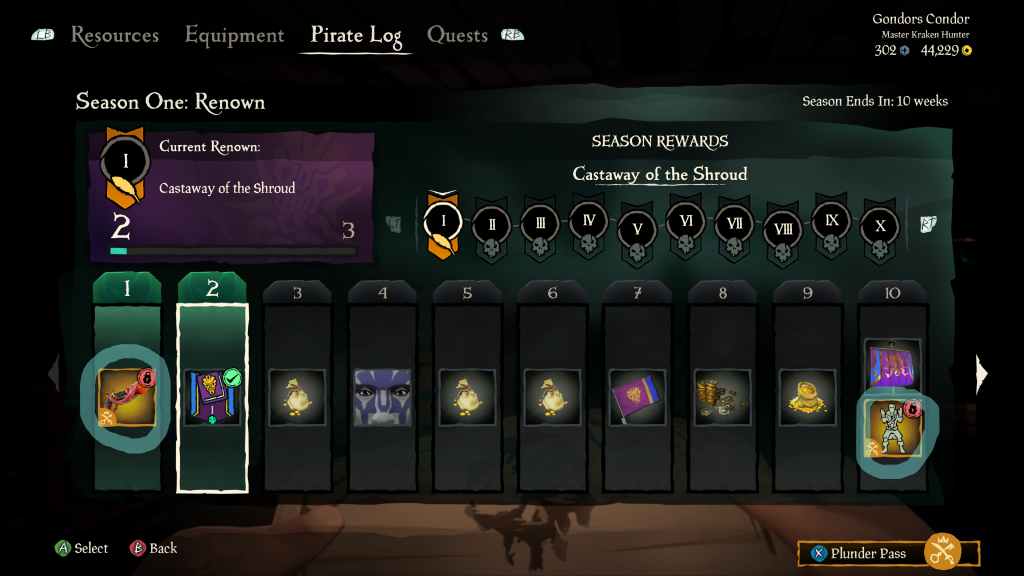 Compare to Destiny’s Seasonal Model. Both games have 100 levels of Seasonal Rewards, which includes in-game currency and cosmetics. Destiny also includes experience boosters, upgrading materials, gameplay-related items (ie extra powerful armor and weapons), and seasonal gameplay modes, like the current Season of the Hunt’s Wrathborn Hunts. More importantly, most of the season pass rewards are locked behind the premium pass. Once players without the Season Pass hit level 20, rewards become less and less frequent. After level 73, players only get random engrams every four levels, most of which are cosmetic.

Rare is onto something here, but it doesn’t fully hit its target. On one hand, more free rewards encourage casual players to keep playing. However, how many of them will actually buy the Plunder Pass if they’re getting so much content already?

Sea of Thieves‘ Rewards Structure is Pigeonholing This Addition

When IGN re-reviewed Sea of Thieves last year, they criticized its reward structure for “lack of meaningful progression beyond cosmetics.” Even with the Emissary system introduced about a month after this review published, their point still stands. For the sake of leveling the playing field, players cannot make optimal “builds” for combat. You can’t upgrade your ship or weapons, and pets don’t affect gameplay, they just tag along for the ride. A game as a service, especially one with free content updates like Sea of Thieves, needs additional financial streams outside of game purchases. Yes, Rare makes money as part of Xbox Game Studios, but they’re three years removed from its initial release. That’s why the Pirate Emporium exists: additional necessary revenue.

All of the above said, there is some sort of legitimate value to the Premium Pass. People who just want something from the Pirate Emporium would want a deal like the Plunder Pass. People who even want one specific thing on there might want to just pay the $10 to get it and everything else. However, when compared to other season passes, Sea of Thieves does have enough value in its Season Pass.

So what now? How does, or even can, Rare build on this good start but fix this glaring issue? Sea of Thieves broke 15 million players last year, and people are playing it more now than they did at launch. Rare has a big audience to show it knows what proper value fits for the Plunder Pass, but right now it just feels slightly out of sync.