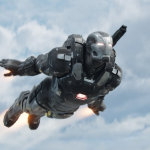 WandaVision has kicked off Marvel’s phase 4. The show has done so much in only four episodes that we really haven’t heard about the next Marvel show. That is until now, Don Cheadle has confirmed that War Machine will be making an appearance in The Falcon and the Winter Soldier.

It’s like we almost forgot that Marvel has a large number of shows coming out this year. The Falcon and the Winter Soldier will be coming to fans this March. Right after the first season ends on WandaVision. While we do know that Baron Zemo will be returning(Mask included) the news has been a little slow for this show. Thankfully we have Don Cheadle to give us a little glimmer of another character that will be appearing at some point. War Machine aka James “Rhodey” Rhode will be in the show.

He had this to say in an interview with BroBible’s Post-Credit Podcast:

It’s really fun and interesting and, by all imagination, completely open-ended — this can go anywhere. It’s great, I can’t wait to get in the room with the writers and figure out how all those things [connecting Armor Wars to the MCU] happen. You know, Rhodey shows up in Winter Soldier and Falcon’s show. So, it can be a lot.

This is also just a small bit of information that Don Cheadle gave the fans. His upcoming show Armor Wars is set to have the writer’s room open up next month. He does explain that the death of Tony Stark will have some role to play in the show. Since they are basically best friends throughout the entire MCU. It would be strange for that not to play a role.

I know many people were unsure about this new take on these characters. If anything WandaVision has taught us to how to watch tv again. With ten years of action-packed movies, it’s nice to slow down and take these characters one episode at a time. I still want those movies, with the pandemic pushing them back this is likely all we’re going to get until May. With the upcoming release of Black Widow. Unless of course that movie gets pushed back as well, only time will tell.