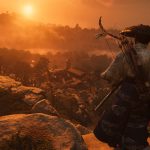 You are reading
Ghost of Tsushima Film in Development

The film and television industries continue to borrow more and more video games as source material. Per Deadline, a Ghost of Tsushima film is in development with John Wick director, Chad Stahelski, attached.

According to Justin Kroll, “Sony Pictures and PlayStation Productions are developing a film adaptation of…Ghost of Tsushima, with Chad Stahelski attached to direct…The game is developed by Sucker Punch Productions and published by Sony Interactive Entertainment and centers around samurai warrior Jin Sakai, the last surviving member of his clan, who must set aside the traditions that have shaped him as a warrior to wage an unconventional war for the freedom of Tsushima.”

Kroll adds that both PlayStation Productions and Stahelski’s company, 87Eleven Entertainment, will produce the Ghost of Tsushima film. Meanwhile, Sucker Punch will serve as executive producer with Peter Kang overseeing the whole project.

Head of PlayStation Productions, Asad Qizilbash, stated “We’re excited to be partnering with Chad and 87Eleven Entertainment, to bring their vision of Jin’s story to the big screen. We love working with creative partners like Chad, who have a passion for our games, ensuring we can create rich adaptations that will excite our fans and new audiences.”

Stahelski is best known as the director behind the acclaimed John Wick franchise. John Wick features Keanu Reeves and tells the story of the former assassin’s return to assassin work. The series released three movies so far, all known for their intense action sequences. John Wick – Chapter Four shot for a May 2021 release originally, but thanks to the pandemic, now eyes a 2022 release instead.