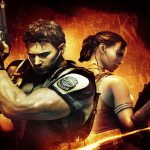 Resident Evil Village is filled to the brim with memorable easter egg’s for fans. Most of these, will come with direct connections to its predecessor Resident Evil 7 and its tonal inspiration, Resident Evil 4. However, what fans may not expect, is that Village even shows some love to Resident Evil 5 by way of an Easter egg. Funnily enough, it is a pretty damn good one at that.

One of the most notorious moments from the series past, is the infamous boulder punching scene. Yes… you heard that correctly. Nearing the game’s final moments, its protagonist, Chris Redfield, finds his path impeded by a giant boulder. A boulder you would presume weighs a ton, right? Naturally, Chris’s first instinct is to push the boulder out of his way. However, he quickly realizes that his puny little human arms are no match for the might of this rock.

So, what does he decide to do? Well, Chris Redfield does what any sane human being would do and decides to punch said boulder. Mercilessly, in fact. Over and over until the boulder finally gives way and rolls into the lava.

In Resident Evil Village, this moment rears its ugly head once more. But rest assured, Ethan is not punching any boulders. Although with his hands, I suppose anything is possible.

A bit of a spoiler warning, so beware: The easter egg happens during the Heisenberg boss fight while Ethan’s unloading lead showers into him. Explosions light up the screen but in the midst of it all, Heisenberg makes a direct nod to Chris. If you really listen in, during screams of frustration, you can make out:

Which, I mean come on? This definitely has to be amongst one of the more self aware and funny easter eggs ever. This also really helps to cement how connected these games are. No matter how ridiculous some moments may be, it is all tied together in one way or another.