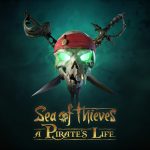 You are reading
Captain Jack Sparrow Comes to Sea of Thieves

During today’s Xbox/Bethesda conference Sea of Thieves teased an epic cross-over. Fans of Pirates of the Caribbean will see characters from that franchise hitting the game. Expect some insanity in Sea of Thieves: A Pirates Life.

Captain Jack Sparrow and some of his friends are making landfall this Summer. Players in Sea of Thieves will be able to enjoy an all-new action-packed story. This story is an original story craft for the game only. Expect new items, enemies, and more as you take part in this new story.

Split across five incredible Tall Tales packed with secrets and side-quests, Sea of Thieves: A Pirate’s Life sees Captain Jack Sparrow sailing in from beyond the horizon to sweep players into an epic new adventure!

The best part about this new content is that it will be completely free to play with the original game. Look for this new content on June 22nd. Take a look at the trailer below to see what you’re about to jump into. This is just one of the many games that have been announced today. Of course, this game is playable with a subscription to the Xbox Game Pass. Personally, I think this is a game that should be purchased by all Xbox owners.

Take a look at some of the other games that were announced today during the Xbox/Bethesda conference. Players can now play the latest Yakuza title with the Xbox Game Pass. Take a moment to leave a comment below to let us know how you felt about today’s conference.