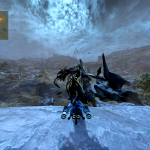 You are reading
A Proper Warframe Mod Guide

I would like to start this off by stating that I have been playing Warframe since 2016. I have accumulated over two-thousand hours in the game. This is being said solely to ensure all of the information I will be sharing in this guide is not to be interpreted as “baloney”. Without further ado, let’s get started.

The “Mod” system in Warframe is the most crucial system in the game. It spills into every single piece of equipment. Whether that is warframes, weapons, companions, your Railjack, or even the Parazon. The mod system is static across all of these things with its own rules and effects for each item. But how far does this rabbit hole go? Well very far to say the least, but don’t worry. We’re here together.

A Brief Introduction to the Mod System in Warframe

Let us begin with the rarity of these mods. The rarity doesn’t indicate the chance of you acquiring it. It is more for the quality of the mod. Here is a short list of the mod rarities:

Requiems are used for Kuva Liches and Sisters of Parvos. Peculiars are mods that provide no actual stat bonuses and do wacky things. Such as allowing plants to grow on enemies you shoot. Bronze sound basic, but some of the most crucial mods for warframes and powerful mods for weapons are bronze. Like “Vitality” or “Redirection” which offer massive boosts to a warframe’s health and shield values. 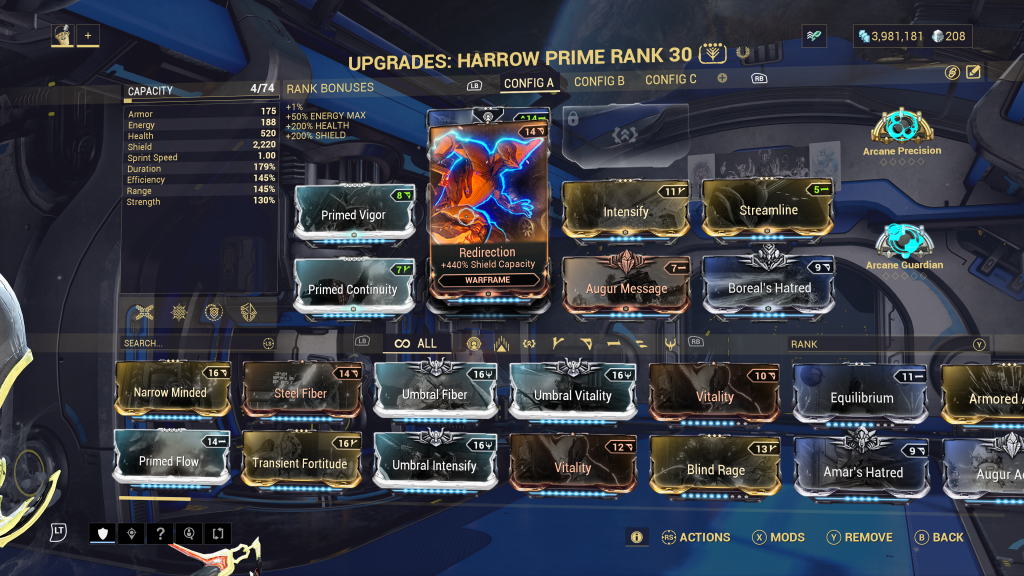 While silver and gold make up a majority of the most useful mods. Such as “Serration” for rifles, which is a flat massive damage increase. While gold ones like “Barrel Diffusion” and “Split Chamber” allow for “multi-shot” of pistols and rifles. Multishot adds a second and depending on how much multi-shot you stack into a weapon, a third or fourth free bullet for double, triple, or quadruple the damage of a single shot.

Primed variants of mods offer much higher stat increases. Amalgams offer a little lower in stat increases but can increase the speed in which you revive other players or dodging speed. While Galvanized mods offer equal values to stuff like Barrel Diffusion or Split Chamber. But each time you kill an enemy you increase the bonus of the multi-shot and it stacks multiple times for further added damage.

With a Bit of Practice

“But is there a way to get more space?” Well, yes. The game offers “Orokin Catalysts” and “Orokin Reactors” that can double the space of a warframe, or weapon. These are not easy to come by without using platinum. But this is where the game uses specific mods for warframes and melee weapons to boost their space. These are known as “Stances” for melee weapons and “Auras” for warframes. Both of these pieces of equipment will have a slot at the very top to place a specific polarity of mod into to boost the space.

There are four different polarities for mods: 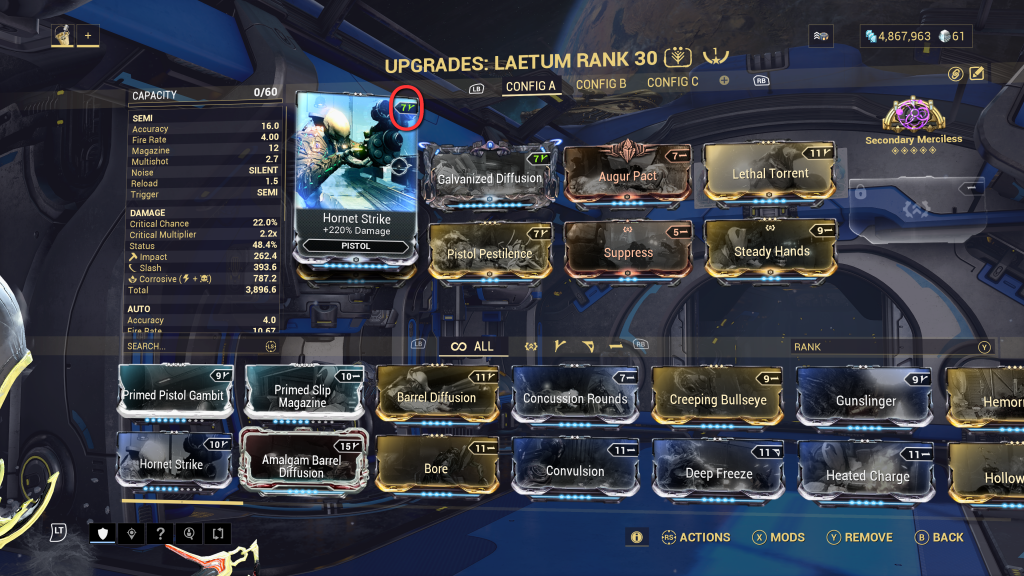 Example of a “V” Polarity

These polarities work within spots of a piece of equipment to half the numeric cost of something. Like Hornet Strike being a V used to be fourteen, when placed into a matching spot it now becomes a seven. For stances and Auras, these get doubled in numeric value since they are used to boost your space, alongside providing passive buffs for your warframes and movement sets for melee weapons.

There are two final types of mods that can fundamentally change a warframe. Let us start with Exilus mods. Right next to the Aura slot in a warframe and on the very right of a rifle or pistol is a slot for these types of mods. They have a range of uses, like “Power Drift” giving warframes a slight boost in ability strength. As well as mods that reduce weapon recoil and increase ammo reserves. That allows you to open locked lockers if you are desperate for materials. These mods are not crucial to use in a build. But can add certain buffs you need for certain frames and weapons. 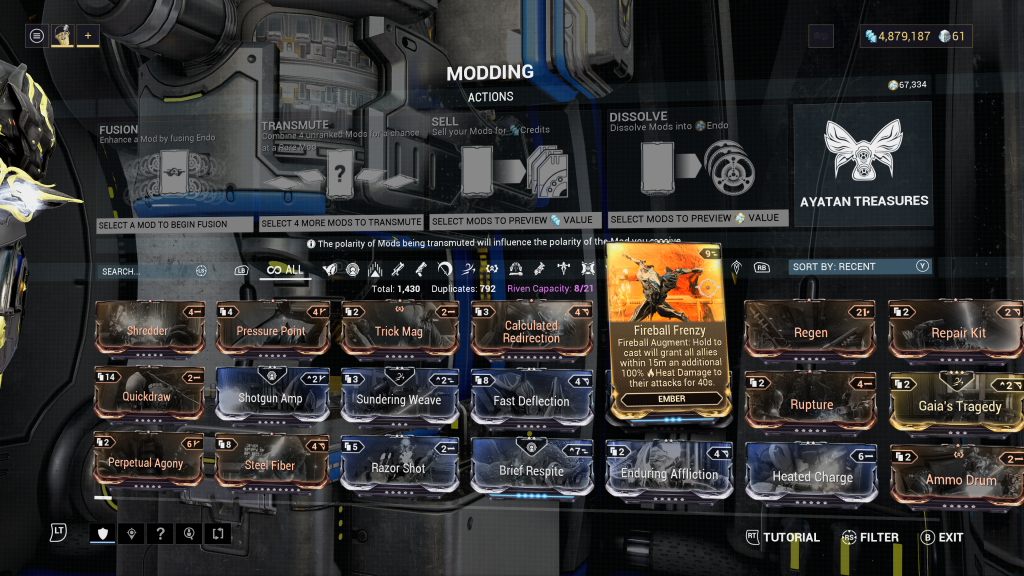 These last are augment mods for warframes. These can either enhance the power of a warframe ability or change how that ability performs. For example, if you use a fireball augment for Ember, you can grant fire damage to players instead of dealing damage with it. While others like an augment for Zephyrs tornadoes can change the few big tornadoes she creates into an army of smaller ones to cover more ground. Every warframe has an array of augments and you can create some very interesting builds with them.

When you acquire a mod, they are unranked. Meaning they will give a very small percentage of their original boost. For example, Serration will start with a 15% boost to rifle damage, but if you max it out it will give you a 165% to rifle damage. “How do I rank them up?” Well if you head over to your mods selection, you can rank them up using the currency “Endo”. These alongside credits are used to rank up the mod. You will only need to do this once for every mod since one Serration can be used in every rifle. 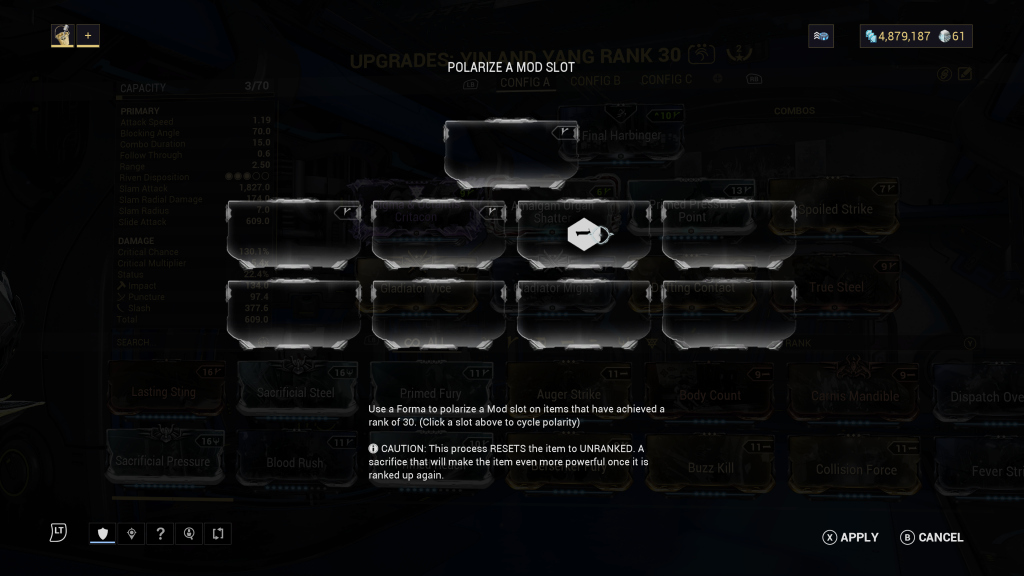 But once you start using double-digit mods, you will start managing the space in your weapons better. Forma can help you with that. These items can add a polarity slot to a mod. Allowing you to cut down the space of a mod. The catch with Forma is that they wipe away the levels of a piece of equipment. This means you will have to level that piece of equipment fully to take advantage of the new polarity. This is a very tedious process but should not be used for every piece of equipment in the game. Save your frustration by using them in the best gear.

The Must-have Mods for Everything

One thing to note is that when you have acquired a mod. This mod can be applied to more than one piece of equipment. You can share the same Vitality mod with all 49 warframes for example.

For warframes you should have a collection of the following:

For primary weapons, like snipers, rifles, bows, and shotguns you should have a collection of the following:

For secondary weapons, kunai, and pistols you should have a collection of the following:

For melee weapons, you should have a collection of the following:

Finally, for companions such as dogs, cats, and sentinels. You should have a collection of the following:

These mods are going to be mods you absolutely need as a beginner and a staple of usage for veteran players, like myself. Some of these mods, such as Vitality, Serration, Pressure Point, and Hornet Strike are pretty easy to come by. While others, like Split Chamber and Vigor, are not. I will not be listing mods for K-Drives or Railjacks since modding those come down to player preference.

This is a LOT to take in. It is a system that is going to require the most time to master. But once you do, you can survive every mission with ease and begin to dominate. The mod system, however, is awesome. Knowing that I would only need one Spira or Ember in my collection instead of having to farm out multiple versions in a convoluted dual-layer RNG-based system is refreshing in the modern online looter space. But seeing as there are over 600 mods to collect and max out, it can still be pretty overwhelming.

I just hope this guide helps you, dear Tenno.