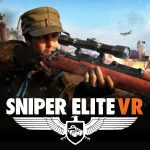 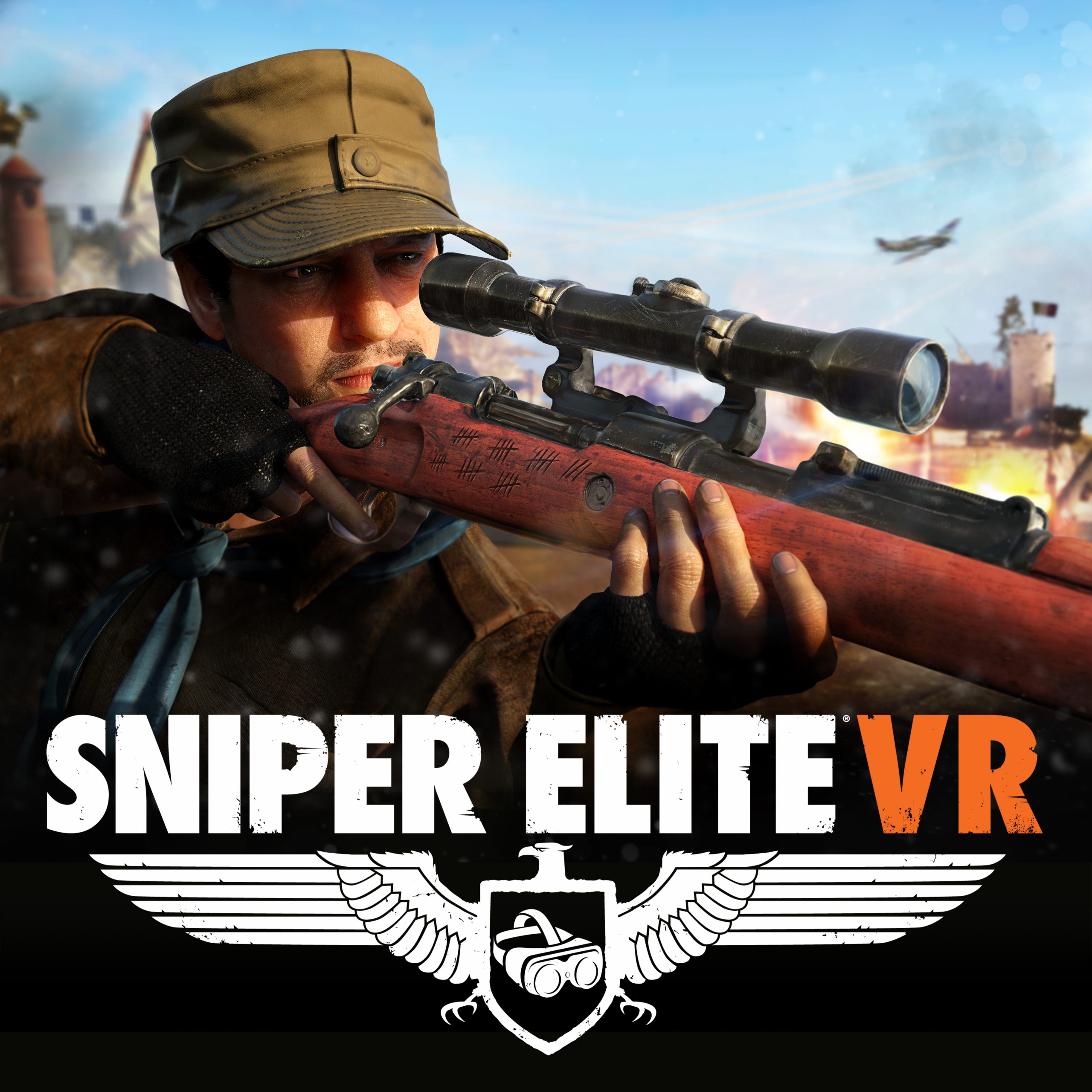 For the past 16 years, Rebellion has been slowly building equity in its Sniper Elite franchise. The latest entry in the series, Sniper Elite VR, takes the WW2 franchise to the nearest head-mounted display. We have run the PSVR version of the game through boot camp on both the PS4 Pro and the PS5 to see how the adaptation holds up.

In Sniper Elite VR, you play as an Italian resistance fighter during the 1943 Nazi occupation of Italy. You quietly move in and around your home village near Southern Italy while attempting to sabotage the German forces. As you progress through the game, you will unlock an armory of authentic World War 2 weapons. Before you depart for each mission there are three weapon slots that can be changed out from a huge collection.

History enthusiasts will be pleased with what the team has done here. Every gun has authentic sights and there is no crosshair. Looking down a barrel is not just for the rifles. The shotguns, automatic rifles, and pistols all have physical sights to look down.There are seemingly countless guns in the game, it genuinely feels like a lot. Among your choices are the M1903 Springfield, Steb MKII, MKB 42, M30 Drilling, Webley MKVI, and one of my favorites, the Welrod. A pistol you will rely heavily on during stealth missions. Each rifle, SMG, and handgun feels distinct, they unquestionably did a fantastic job with the weapons. 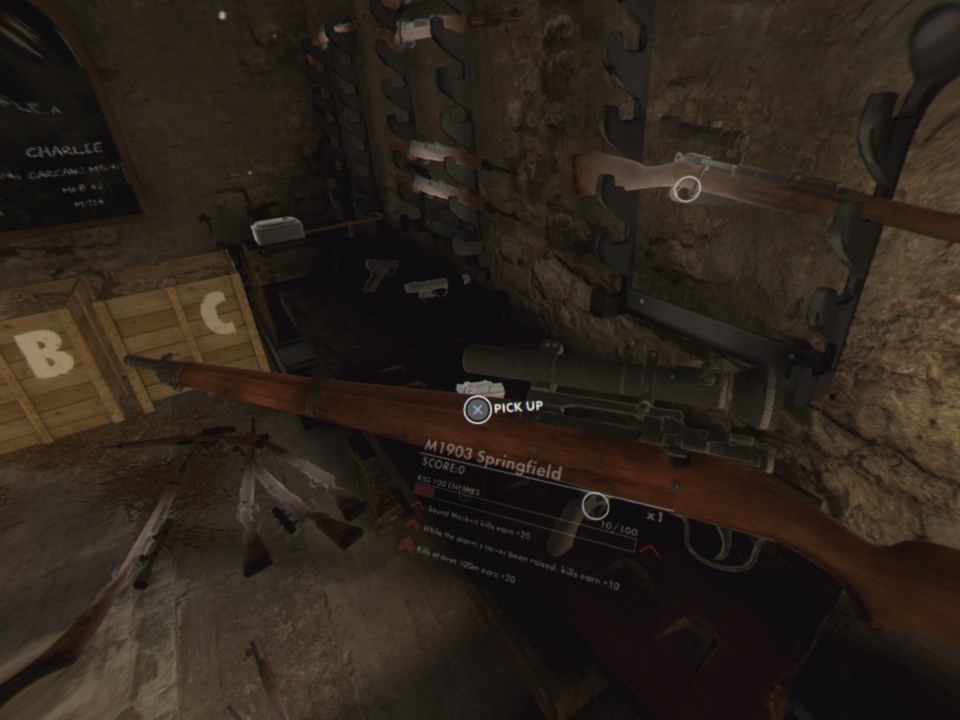 Predominantly, this is a stealth game where you are quickly moving between vantage points to get the best angle on your enemies. However, there  is a nice mix of action blended in. Each mission feels unique and has you doing different things. One mission may have you protecting a house as hordes of enemies try to invade. Another has you relying on a shotgun or an SMG to clear out hallways in an underground bunker. All while maintaining the identity of a Sniper Elite game. Along the way you will find grenades, trip mines, RPG’s and a few other explosives, the pacing is fantastic. Some of the heavy stealth missions become captivating as they start to teeter into classic Splinter Cell and Metal Gear Solid territory.

Sniper Elite As A PSVR Game

Thankfully, Sniper Elite VR supports the Aim, DualShock, and Move controllers. If you already own the Aim controller, this is a fantastic example of how complementary it is to the PSVR library of games. Using both hands to hold the gun up to your cheek then closing one eye to look down the scope is the ultimate immersion. Plus, the added joysticks bring a free movement option compared to teleportation needed for the Move controllers.

If you do not currently own the Aim controller, the DualShock works in the same way, by bringing the controller up to your face to look down the barrel of the gun. With any of the controllers, you have the option to change between snap and free movement for turning. You should try both to see what works best for you. For the most part, I do not prefer snap movement. However, on both this and Doom 3 VR, changing to snap got rid of nausea while playing.

I did have to make two more adjustments when playing. Typically, I leave the camera on top of my TV. I had a rough experience trying to get the gun to reflect my movements accurately. After moving the camera to the bottom of my TV, the tracking improved somewhat. Another thing to note, I do try to play PSVR standing up. It seems like Sniper Elite VR tracks much better if you are sitting down. Certainly, tracking must be a better experience on the Oculus and Steam hardware. Tracking is an area of the game that needs improvement. When you are dealing with something as hyper-sensitive to movement as a sniper rifle, the tracking should be better. 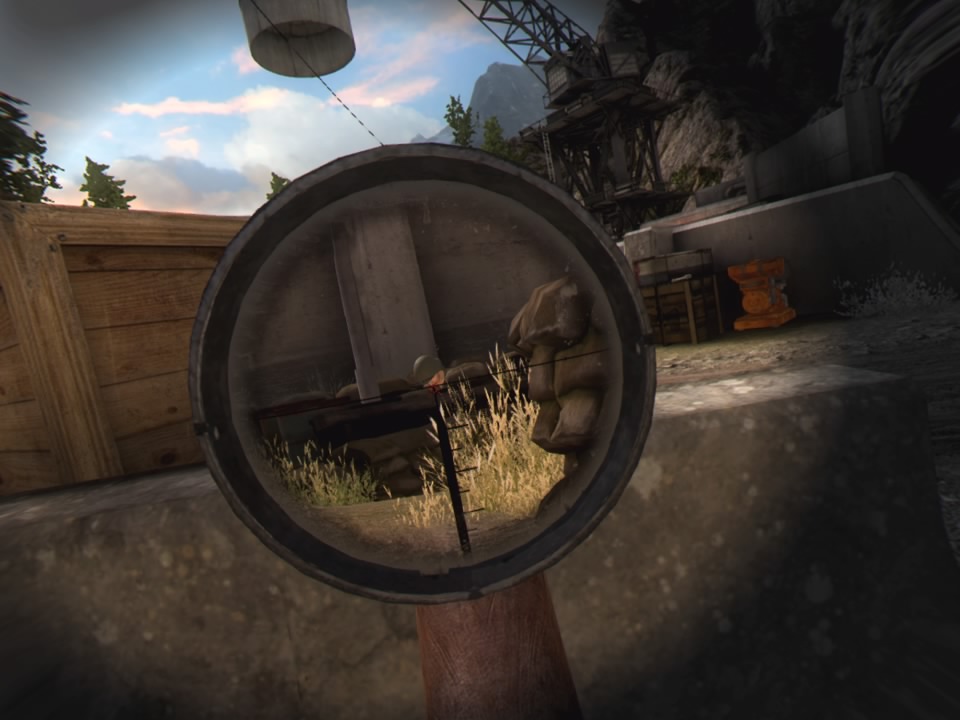 With almost any shooter, there is some CPU-controlled fake movement when using a sniper rifle. We all have experienced it. You look down a barrel, the sights slightly move around, emulating small deviations in your body. You press a button to hold your breath and then magically the sights straighten out. I was surprised and disappointed to see this mechanic here because it is already tracking my actual movement. There is no need to add simulated movements. The end result has the sights move around while you physically move to correct that. Creating this often frustrating mess where the game fights your movements.

It has become commonplace for publishers to find ways to release scaled-down versions of popular IPs to VR platforms. Often consumers never know what they are in for as the range extends from the fantastic adaptation of Resident Evil 7. All the way to the 50 minute “VR experience” that is Wolfenstein: Cyberpilot. Have they ported an already existing game to VR? Is it a true new standalone title? Is it a “VR experience” or a glorified tech demo?

The name Sniper Elite VR does not promise much hope. Yet the end product is a fresh, new, full-blown Sniper Elite game. Although it has been limited by the power of the technology. It is hard to say for sure if Sniper Elite VR is a departure in level design. Sniper Elite 4 has large open maps. Not exactly an open-world game but a collection of open sandboxes. Think of something similar in scope and size to Hitman 3.

However, if you look at the first three Sniper Elite games you will notice that the level design grows in depth with each game. Starting with the original Sniper Elite game from 2005, the levels are around 15 minutes long and as linear as you can imagine. There are perfectly staged sniping areas that make the game feel like it is on rails. Sniper Elite 2 and 3 that followed made small incremental steps towards the large open maps found in Sniper Elite 4.

How VR Has Altered Design

With Sniper Elite VR falling somewhere in between the first three entries in the series, it is a stretch to say that Sniper Elite VR is a stripped-down take on the Sniper Elite franchise. The level design and overall scope of the game are very similar to the first two titles. With its VR entry, there are 18 levels that range between 5 and 20 minutes long. Leaving what feels like a nice length for a complete VR game.

For completionists, there is a wealth of content outside of the story campaign. There are three challenges per level to improve ranking. As well as leaderboards, collectibles, and gun collecting for custom load-outs. With Sniper Elite 4, you have the option to toggle six different options to enhance the game’s gun mechanics. Changing weapon spread, scope drift, gravity, and wind settings to “authentic” gives it more of a simulation feel. It was something that made Sniper Elite 4 interesting and unfortunately that is missing here.

On the other hand, Sniper Elite VR has the added immersion you can only get from playing in VR. While the shooting mechanics are missing that authentic selling point, holding the AIM controller to your cheek and closing one eye to look down the barrel cannot be replicated elsewhere. It is phenomenal. This is what you dreamed of having at home as a kid after playing arcade games like Silent Scope.

Visually speaking, Sniper Elite VR is a completely average PSVR title. The resolution could really benefit from a boost and most environmental details are not on par with Sniper Elite 4, a four-year-old game. If you are a fan of the series you are going to feel how the tech from 2010 in PSVR holds the game back. Of course, for the sake of VR, there is no issue with frame pacing or frame rate. It played as stable as I could imagine. I assume for VR stability the frame rate is this way all the way down to the slim PS4 model. This may speak to why the resolution and level of detail are so poor. 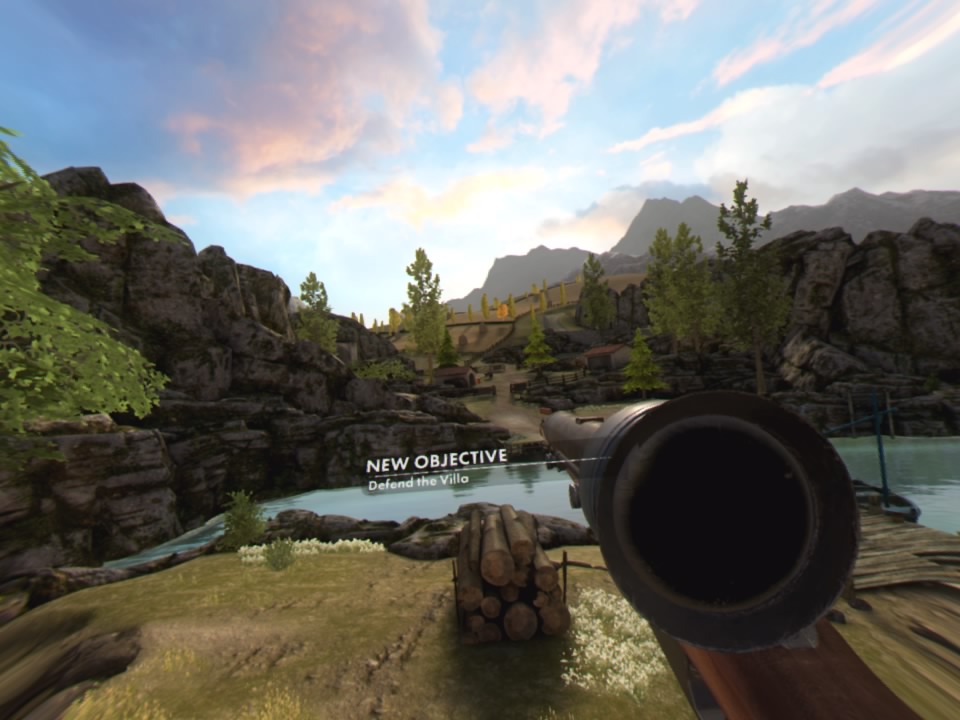 I played through the game on both the PS4 Pro and the PS5. Unfortunately playing on the PS5 has no added benefit. I was surprised to see this since even old PS4 games see improved load times on the PS5. Plus a number of older PSVR titles have been improved on the PS5. I would really like to see the team come back and remove the load times as well as increase the resolution.

Especially now that I have become acclimated to playing on the PS5, those load times seem more tedious than they actually are. As small things like scaled-back level design, low resolution, and frequent load screens start to add up, Sniper Elite VR can feel dated. Although under the disclaimer of being a PSVR title, it holds up against most other VR games.

While the tracking in the PSVR headset dates back to 2010, the 3D audio provided by the PSVR breakout box is way ahead of its time. Sniper Elite VR does a great job leveraging this, giving you zero visual cues where enemies are. You must rely on where the sounds are coming from. This improves the overall level of immersion. As the player, you should hear footsteps around the corner in front of you. You should hear someone running up a flight of stairs in the room next door. Thankfully, here you do. 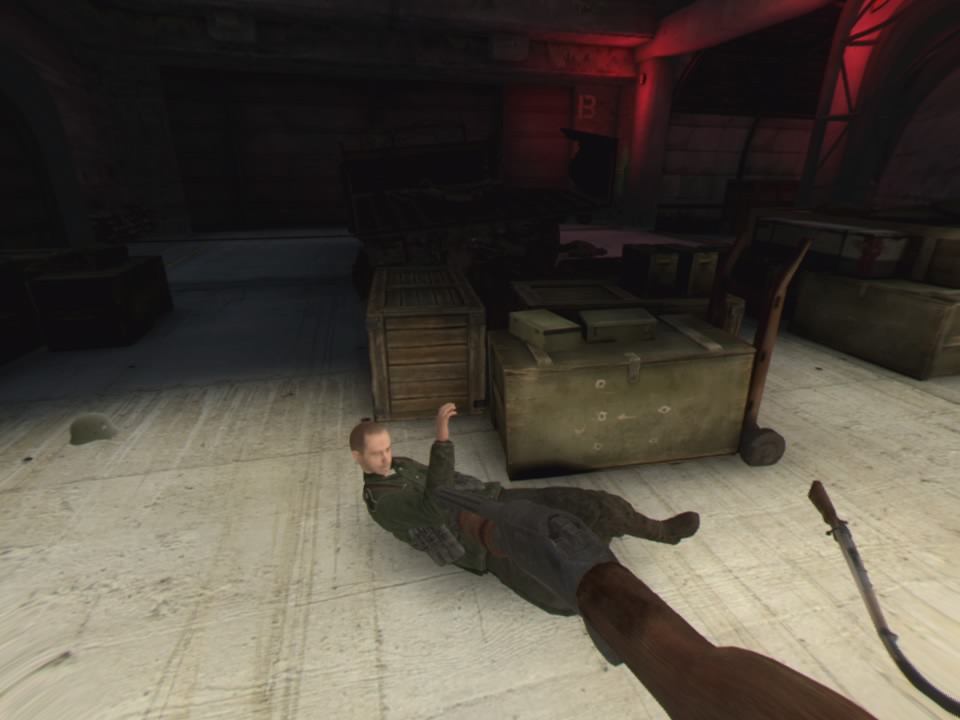 While the audio queues are great, it is another reminder that the game fails to utilize the PS5 in any way. It is not Returnal, Spider-Man, or Demon’s Souls. There is a little bit of cool stuff there but, it does not leverage the PS5 and take the next step. What is included here is very minimal. From a technical standpoint, expectations are set by the budget price point and the PSVR platform. Just do not set your expectations to $79.99 PS5 levels of audio.

We In The Killin’ Nazi Business

In its final months, great PSVR titles are going to be few and far between. If you are looking for a brand new FPS, your options are extremely limited. What has been provided here is more than enough to satisfy as a VR title. If you have an appreciation for WW2 settings and history, this is the game you are looking for. It is not a tech demo, not an experience, Sniper Elite VR is a fully constructed Sniper Elite game. While visually it cannot stand up against the most recent Sniper Elite title, bringing the franchise to VR platforms is a fun and unique take on the series. Plus you get to kill Nazis, and that is cool too.