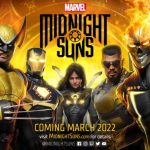 As part of the summer 2021 all-digital gaming conventions, today was the opening day for Gamescom. The 2021 Gamescom event will take place from August 25th through the 28th. Kicking off with Opening Night Live, hosted by Geoff Keighley of The Game Awards. The two-hour Opening Night Live event promises fresh looks at nearly 40 upcoming games. As well as brand new game announcements. Including the reveal of the long-rumored Marvel strategy game from the creators of X-Com. The game is titled Marvel’s Midnight Suns.

The game is being published by 2K and will release in March of next year. The trailer features characters from Avengers, X-Men, X-Force, and a brand new character created for the game. The team has promised a gameplay reveal on September 1st. In Marvel’s Midnight Suns, you create your own primary character. From there you will control them through the strategy RPG in addition to 13 other Marvel characters. It should be noted you can swap between different members of your team but, will only control your created character through the game’s base building.

Firaxis, the game’s developer has promised this will not be an X-Com clone. Marvel’s Midnight Suns will lean more on RPG elements and less on the turned-based strategy game they are known for. It will be exciting to see if it can re-create the magic of late 2000’s cult hit X-Men Legends. The game that would future go on to lead to Marvel’s Ultimate Alliance franchise. One thing is for sure, it is nice to see X-Men and Ghost Rider back in games.