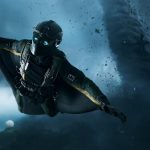 You are reading
Battlefield 2042 Review: Another Missed Opportunity
Battlefield is a franchise that always seems to fall just short of greatness. While Battlefield 3 and 4 are considered to be some of the best military-style FPS games. The more recent installments in the franchise, while being serviceable, simply fell short of fan expectations. Battlefield 2042 promised to change that. It was supposed to be a massive step forward for the franchise by returning to its modern/futuristic setting for the first time since Battlefield 4. As a fan, I was incredibly excited about this release. The promise was of a higher quality multiplayer-focused experience, with 128 players battling it out for supremacy. It was an incredible pitch, but unfortunately, the delivery was anything but memorable.

Expanding To A Bigger World

By expanding to 128 players on a map, instead of the usual 64, there was no doubt that the maps would be bigger, and indeed some of the maps are insanely large. Even with 128 players, some of the maps just feel too big. The problem is not just the size, but the amount of dead space contained within their area. With the variety of vehicles available in Battlefield, this usually is not too much of a deal. However, when the large distances between objectives are empty, it makes you easy fodder. I constantly found myself being decimated by aircraft from insane distances due to the complete lack of cover available in some of the maps. It is important to note that not all the maps suffer from this. Renewal and Hourglass though are particularly guilty. Unfortunately, with only 7 maps to choose from in the standard conquest mode, it makes these maps stick out like sore thumbs.
While some maps did feel too large, there were some maps that I thoroughly enjoyed during my time playing. Manifest, which places you fighting over a shipyard in Singapore, has a wide variety of environments. From a forest hilltop central objective to a dock filled with containers and concrete barriers for cover the variety on display was impressive. Some of the most intense gunfights I had during my time with the game took place here. Dodging sniper fire while engaging in CQC was a rush. Ultimately though, Manifest is the exception not the rule. On the whole, I feel Battlefield 2042 suffers due to the lack of map variety within the game. While it is essentially impossible to make every map incredible. Having only 7 maps at launch, makes the bad maps stick out more. Furthermore, none of the maps feel like one of those legendary arenas that almost every Battlefield game has.

Adjustments On The Fly

Flexibility is the name of the game in Battlefield 2042. Combat will take you from wide-open landscapes to tight CQC areas. Trying to find the perfect weapon that can help you survive in all these situations can be challenging. Being a sniper with a 4x scope in a tight office building is less than optimal However, Dice has given players a new way to approach these challenges. Not only can you adjust your class in between spawns, but players can also now adjust their weapons on the fly.

For example, you can use an assault rifle with an ACOG sight as you try to break the enemy lines from a distance. Then as you approach the building, with two simple button clicks you can strip your ACOG sight off to iron sights to then breach into the building without having to worry about your attachment being overly zoomed in. This feature works with all attachments for your weapons, from silencers, grips, and magazines, the options are at your fingertips.

Battlefield 2042 continues Dice’s trend of having “Only in Battlefield” style moments. This is thanks to the massive player count on each map. It is really easy to get absorbed into an intense gunfight as you try to capture a central objective while helicopters and tanks explode around you. However, it feels like Battlefield is missing that “wow” factor. After years of touting destructibility as a primary feature of the franchise, it just does not seem to be as impressive as it used to be. While there has been plenty of minor changes, it ultimately feels like more of the same. Those big changes that do occur just feel like trend-chasing. Notable among these is the decision to scrap Battlefield’s classic class system and instead replace it with a Specialist system.

Classes that players have known and loved in prior Battlefield games have been discarded. Instead, the Specialist system sees players customizing their load-outs and choosing specialists with various unique abilities. This feels once again like Battlefield is chasing their competitors versus doing something unique. Call of Duty has long used “Specialists” within their multiplayer experience. Battlefield 2042‘s specialists feel like a copy and paste of its competitors. Many specialists have borderline useless abilities. Players have already zeroed in on a small handful of “useful” operators that they choose from. While these specialists will no doubt be buffed and nerfed in upcoming patches, it feels like a half-realized idea that was implemented in order to try to draw more casual FPS fans to the series.

Battlefield is unfortunately a franchise that has become notorious for its buggy launches. Battlefield 2042 is no different, as I found several bugs and glitches during my time with the game. Not only were their plenty of issues, some of them directly impacted the functionality of the game. Battlefield 2042 hard crashed my Xbox Series X five plus times. These bugs were more than just crashes.

Unfortunately, sometimes when loading into games I would not get to choose which specialist I wanted to use or let me access my different load-outs. Instead, it would spawn me in with a random loadout that I had made, with the specialist that I used in the last game. While this issue could be fixed by simply closing out the game, if you are in a squad with your friends having to restart your game and then go through the process of partying up again is a chore.

On top of the frustrating crashing issues, pop-in textures were almost a guarantee. These were paired with framerate drops that happened at the absolutely weirdest times. One might expect these issues when 60 plus players are engaged in combat in a central area, the game might struggle with all of the action. But I found most of my framerate issues commonly popped up when I was simply traversing the map. All of these technical issues snowballed into making playing the game feel like work. It felt like technical issues got in the way of the game more than anything.

Meanwhile the new game mode, Hazard Zone, sees squads of 4 players face off in a unique take on Battle Royale that has players collecting data drives while fighting off other squads. All this occurs with the backdrop of a massive storm slowly closing in around the players. Players then have to choose when to extract and collect their rewards. Hazard Zone is a unique take on a Battle Royale-style mode, though personally I bounced off the mode due to simply requiring a full squad in order to coordinate properly as teamwork is a huge aspect of this mode.

I have to give credit to Dice for doing something unique with Hazard Zone, but it feels odd that the game is missing core game modes that Battlefield fans have come to expect. Not having staple Battlefield game modes like Rush, Domination, or Team Deathmatch feels incredibly odd. Dice has stated that more game modes will be coming post-launch; however, this lends more credence to the idea that this game simply needed more time. Battlefield V launched with 9 maps and featured 6 game modes at launch as well as a fully realized campaign. This is a stark contrast to Battlefield 2042. Once again it feels like Dice was focused on chasing the Battle Royale trend with Hazard Zone, and simply let classic game modes fall to the wayside.

The lack of content is not only felt in the game modes. The weapon variety feels incredibly weak. With many weapons tied to higher-level unlocks, early on the weapon variety feels painstakingly limited. How limited are the weapons in Battlefield 2042? There are only 3 secondary weapons for players to choose from, a single-shot pistol, a machine gun style pistol, and a revolver. What is even worse, is that many of the guns feel similar in terms of their damage output and overall impact.

This makes the unlock system feel almost nonexistent, as the game awards you with mediocre emblems and camos while the best weapons hide behind high-level caps, and unlocks for these weapons feel few and far between. If you don’t like the main assault rifle that you start with, tough luck. It will likely take you upwards of 4 to 5 hours to unlock the next rifle type early on. This will likely turn away many new players trying Battlefield for the first time, which was opposite of the goal.

Battlefield 2042 was a golden opportunity for the franchise to rise above its past failures, and to truly spread its wings. Again, just like previous Battlefield releases, 2042 needed more time in development and was clearly rushed to meet a deadline. Confusing design choices, a wide variety of technical issues, and a general lack of meaningful content all contribute. Could Battlefield 2042 have a redemption arc like so many previous titles in the series? Absolutely, but at some point, a line needs to be drawn in the sand. Fans deserve a high-quality title front to back. Especially with the current $70 price tag on Battlefield 2042, I cannot recommend it until Dice addresses critical issues, and delivers more content to justify the price tag.
5.7