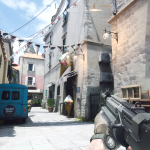 Today is the Game Awards which means a massive celebration of the gaming industry is on its way. Celebrating the creativity and hard work of all the developers who developed and published games in 2021. As is tradition with the Game Awards we have a wealth of new trailers and announcements to be excited for. The upcoming tactical FPS Crossfire X has been a question mark this year, as it was supposed to launch at the end of 2021. Luckily enough, we received an update and it appears the game will be in our hands very soon.

Crossfire X is the upcoming FPS made in partnership with Smilegate and Remedy. While Crossfire has been a long-standing FPS franchise overseas, it finally makes its way West next year. This is with the help of Remedy Games who will be contributing a single-player story-focused campaign for Crossfire X. With Remedy’s talent at making pulse-pounding sci-fi action games like Max Payne, Control, and Alan Wake. It’s hard to not be intrigued at the possibility of Crossfire X. We will not have to wait long to experience the title, as it is officially coming to Xbox Series consoles and PC on February 10th, 2022. Adding to an already absurd list of games launching in the month of February.

Are you excited about this upcoming FPS title? Let us know in the comments and don’t forget to check back for the latest gaming news and information.