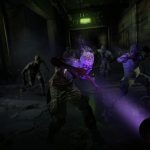 You are reading
Dying Light 2 Review: Jumping Through Bugs

The original Dying Light was released back in 2015 and during a time period that was packed with other zombie games. Despite this, the game still managed to stand out. From its unique parkour and melee-focused combat, the franchise developed a massive following. Dying Light was heavily supported with a wide variety of post-launch content from the developer’s Techland. Now, over 7 years later, Dying Light 2 is finally here. While the combat and parkour remain immaculate, Dying Light 2 suffers from its dated open-world design and a variety of bugs.

Dying Light 2 Kicking Off With A Bang 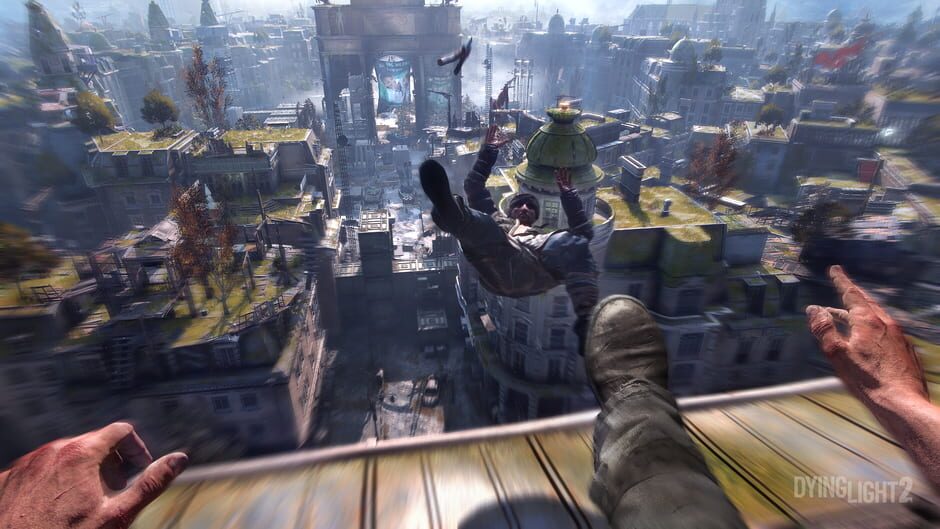 A fun and engaging gameplay loop can be the difference between an ok game, and an absolutely amazing game. I was impressed by the smoothness of Dying Light 2. It is not too often I enjoy melee combat from a first-person perspective. While Chivalry 2 remains one of my favorite games from 2021, it is rare to find a melee-focused game as fun as Dying Light 2. The first-person perspective can be very hard for developers to coordinate when it comes to combat. Luckily, it feels incredibly natural in Dying Light 2. As you upgrade your parkour skills through simply free running and exploring the city, you will gain more maneuvers and moves that make traversal even more fun. Some of the parkour moves can be disorientating at first. Especially rolling, which feels incredibly odd in a first-person perspective.

As you master and learn more of these techniques, it only becomes more fluid. I have not had this much fun with a parkour system since the original Assassin’s Creed all the way back in 2007. The ability to almost flow like water around the city never loses its charm, and the variety in animations for traversals was exceptional. The thrill of leaping through a tight gap as a horde of zombies pursues you have been some of my favorite gameplay moments so far this year.

Combat is explosive, and nuanced without being overly complicated. In the beginning, I was worried that the combat would get boring and repetitive with its dodge/block plus smack enemy with the right trigger. However, after a few hours and a few upgrades, combat becomes incredibly fluid and rewards you for perfection. Perfectly timed blocks and dodges to then leap over an enemy and dropkick the person behind them off a rooftop is incredible. With a wealth of unique bladed and blunt weapons at your disposal, you will find no shortage of tools to eliminate your foes. Dying Light 2 has a straightforward and intuitive crafting system that makes it quite easy to upgrade your favorite weapons. From electrically charged knives to explosive shotgun-style weapons your options feel almost endless. What is not endless though is physics and how it is treated in Dying Light 2.

The game fully embraces ragdoll physics. Sending bandits and undead alike careening off of objects had me laughing hysterically. While the world of Dying Light 2 feels gritty and real, the combat throws all of that out the window in the favor of ridiculous and over-the-top action. The combat unlocks give you access to even more ridiculous ways of killing your foes. From flying dropkicks to windmill-style melee attacks, I found myself hunting for encounters with enemies.

Branching Narrative and Changing The World 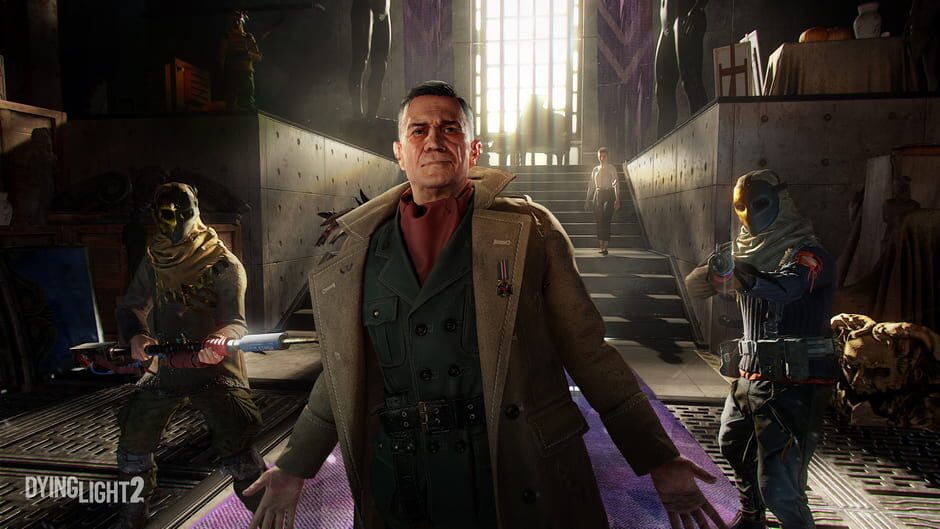 Prior to the release of Dying Light 2, it was showcased how much the player’s choice would come into play with the world around them. With a focus on every narrative choice serving a purpose and crafting the world to be truly unique to the player. This was a very tall order to fill that Dying Light 2 ultimately delivers on in some ways but fails in more critical moments. More specifically, certain moments that feel like they could be absolutely critical decisions ultimately don’t change much. As you align yourself between the two major factions, Dying Light 2 focuses heavily on the positive benefits of helping a faction.

If you choose to favor the survivors in your decisions traversing the city will be much easier. As you claim more territory for the faction you will gain access to such helpful tools as jump pads and ziplines littered across the city. However, if you choose to side with the authoritarian Peacekeepers, killing zombies will become much easier as the city will be filled with a variety of traps and bombs. This equipment allows you easily dispose of the undead hordes.

Players shape the world is by allocating resources between these two factions. As you explore the city you will gain side activities that will charge you with giving the people power in order to thrive and survive. From scaling windmills to maze-style water towers and power stations there is a good amount of variety in activities for players to engage with to help the different factions around the city. Scaling up these massive buildings felt very similar to finding the Leap Of Faith points to synchronize in the old Assassins Creed games. Fortunately, it is much more varied than say climbing endless radio towers in a Far Cry game. It still feels incredibly familiar and repetitive. Luckily, the gameplay loop saves it from being a complete drag.

The storytelling is incredibly hit or miss throughout the campaign. The story retreads some terribly familiar zombie game tropes. Uninspiriningly, you play another bland protagonist who is searching for his sister. While on paper it feels incredibly generic, I did find myself surprised with some interesting betrayals and plot twists along the journey. Whenever you thought that you had a character figured out, a curveball would be thrown at you. While your choices sometimes didn’t have the biggest narrative impact, the main story beats did deliver on some intense and unforgettable moments. 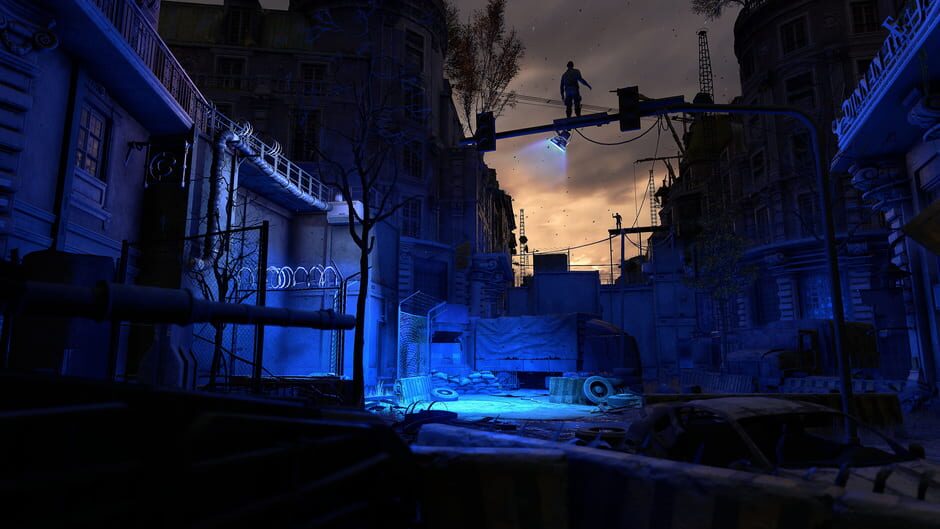 Open world games often seem to face challenges when it comes to a meaningful day and night cycle. This is especially true with stealth-focused mechanics. As there is nothing more annoying than being spotted in the middle of the night by an enemy from over 300 meters away. In Dying Light 2 thanks to the variety of enemies and how they react to the night and day cycle, it feels like two incredibly different games.

During the day, the city is filled with life, from survivors gathering resources to bandits committing armed robbery. There is plenty to do during the daylight hours, and the city is beautiful. While scaling the rooftops and making your way through the city it’s easy to get lost in the beauty of the world. You almost forget that you are in the middle of an undead apocalypse. During the day, most of the undead seek refuge inside and become incredibly slow and inattentive. This means players can sneak through buildings if necessary but has to be careful as the hordes of undead are sitting and sleeping waiting for the night.

When night falls, the world transforms and the map feels incredibly different. All of the undead will take to the streets and pack them from street corner to street corner. Sticking to the roof is essential for survival. Players are able to move through buildings freely with very few undead blocking their way. This will allow players to loot and hunt for rare weapons and crafting material. I really enjoyed the contrast between daytime versus nighttime play. As they were both equally rewarding but in completely different ways. How I approached the map was directly decided by the day/night cycle.

Bugs and Crashes Are All Too Common

I spent my time in Dying Light 2 on Xbox Series X. While the game undoubtedly shines on PC, it still is a beautiful game on the Series X. Although there were some strange framerate hiccups during combat when the game launched. This was quickly patched by Techland with Dying Light 2‘s first update. The world is stunning and the framerate is solid, but unfortunately, there are still a wealth of issues to be addressed.

In an open-world game, it is quite common for there to be an odd bug or animation glitch. After all, the bigger the world the more things that can go wrong. Most of the time I don’t find bugs and hiccups to be that detrimental to my experience. However, there were some pretty unique and downright annoying bugs that I encountered in Dying Light 2.

The first and possibly most annoying is a recurring audio glitch. This glitch will either completely silence the game’s audio. or in worse scenarios, create a high pitching squealing sound. The only way to fix this bug is to completely exit and restart the game. Sometimes I had to do this several times in order to get the audio to work properly. This would happen during critical moments as well. There is nothing much worse than watching a cutscene to be promptly interrupted by a shrill screech coming through your headphones.

Aside from the audio glitch, I ran into several broken missions as well. Sometimes, important quest-related NPCs would be nowhere to be found. To add, objectives would disappear from the map and sometimes the mission would disappear completely. During one particular side mission, I died while trying to parkour across a rooftop. Then when I respawned the mission was gone from my log and I couldn’t find the NPC to trigger the mission again. All of these issues combined made it increasingly clear the more I played. I felt that Dying Light 2 needed more time in QA.

As someone who loves first-person perspective games, Dying Light 2 was a blast, despite unimaginative and forgettable side content. The gameplay loop kept me coming back for more. Although the storytelling and world design didn’t live up to expectations, it still was engaging and meaningful in its own way. Unfortunately, many of the bugs, and save file issues I had were incredibly detrimental to the experience. When the game works it is fun. But when it doesn’t, it is absolutely frustrating. Dying Light 2 could have been truly special if it had just had a little bit more time in development.