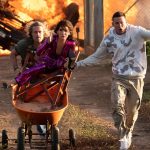 You are reading
Lost City is Able to Knockdown Batman

One thing that I love about the box office is you never know which movie is going to take the top spot. The Batman finally dropped down to second place after The Lost City won big.

The Sandra Bullock film The Lost City was able to have a good opening weekend. So good that The Batman now dropped down to second place. This film grossed an estimated $31 million this weekend. Expect this movie to hit Paramount+ later this year. Most Paramount films hit the streaming service soon after the movie’s theatrical release. You can watch Jackass Forever and Scream right now.

RRR (Rise Roar Revolt) is an Indian period piece that has had a great opening weekend in the United States. It grossed an estimated $9.5 million this past weekend. At the moment RRR has a worldwide total of $65 million. It will be interesting to see how this film does at the domestic box office with only one new movie coming out this weekend. The Batman now sits at $672 million worldwide as its momentum cools down. This past week a deleted scene was released, as a fan, I don’t fully understand why this wasn’t included in the movie. I would have enjoyed that extra five minutes in the theater. Take a look below as we are introduced to the new Joker played by Barry Keoghan.

This coming weekend the only movie that is being released in a wide number of theaters is Morbius. This Sony/Marvel movie has been pushed back so many times it doesn’t seem like it will be doing well. We won’t fully know what people think about this film until the embargo is lifted on the 31st. Congrats to Dune who went out and won six Academy Awards last night. It is wonderful to see this great science fiction empire have a film that people actually want to see.