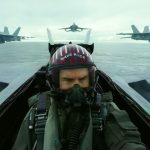 You are reading
Top Gun Maverick Dominates a Second Weekend

This past weekend Sony did something no one would think of. They re-released the movie Morbius. While that movie could not gross more than $100,000 at the box office, Top Gun Maverick soared.

For a second weekend, the sequel to the 1986 smash hit was able to stay at number one. Top Gun: Maverick grossed an estimated $85.9 million this weekend. After that huge opening weekend, this film now sits at $291 million domestically and $257 million internationally. That brings the worldwide total to $548 million. It looks like this was a great idea to hold off the release for a little while.

Marvel is now just printing money as Doctor Strange in the Multiverse of Madness lands at number two. $9.2 million isn’t anything to make fun of. Given that we are in some strange times still, this is a healthy number two. At this moment the film is knocking on that billion-dollar mark. Without being released in a couple of important markets it looks like that won’t be happening.

2. Doctor Strange and the Multiverse of Madness $9.2 million

This upcoming weekend is going to be one huge opening weekend. Look for the movie Block Party and Jurrasic World: Dominion. Expect this new Jurrasic World movie to be able to take over that top spot with no problems.