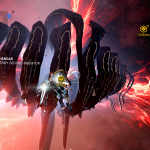 You are reading
Railjack In Warframe is Perfect

Warframe since its inception has always been about its fun and frenetic combat. A galaxy-spanning journey focused on being a “Space Ninja”. The game even advertises itself with “Ninjas Play Free”. But over the game’s constant evolution. Adding in a multitude of weapons and warframes giving their Ninjas cats and dogs, even a skateboard to boot. None would ever imagine that the galaxy-spanning journey would become a space-faring journey. Where the Space Ninjas would become Space Pirates. 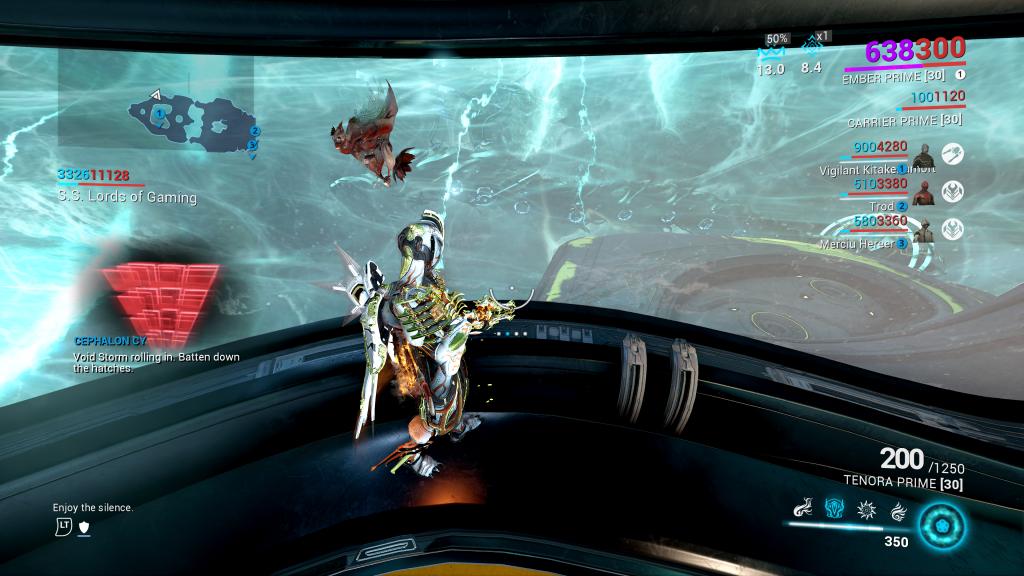 Enter Railjack. Warframe‘s solution to transitioning from standard on land, or in ship combat to being in your own ship. Excitedly flying across the cosmos, gunning down enemies, and plundering ancient derelict relics, ice labs, or giant military ships. While it isn’t a brand new system for Warframe. I had finally sat down to finally see what this new journey is like. Finding not only a fun addition to this game but one that I feel is perfect.

Railjack from the very beginning is similar to starting Warframe itself. A brief introduction to the lore, a starting story quest with basic gameplay usage. As well as setting the “Space Pirate” theme. When you build your Railjack. It is basic, with no enhancements, starter gear, and starter stats. An empty vessel ready to embark with its captain and a new AI to accompany you. Cy is a stern yet very helpful guide as you take off from Earth to take on your first batch of Grineer. 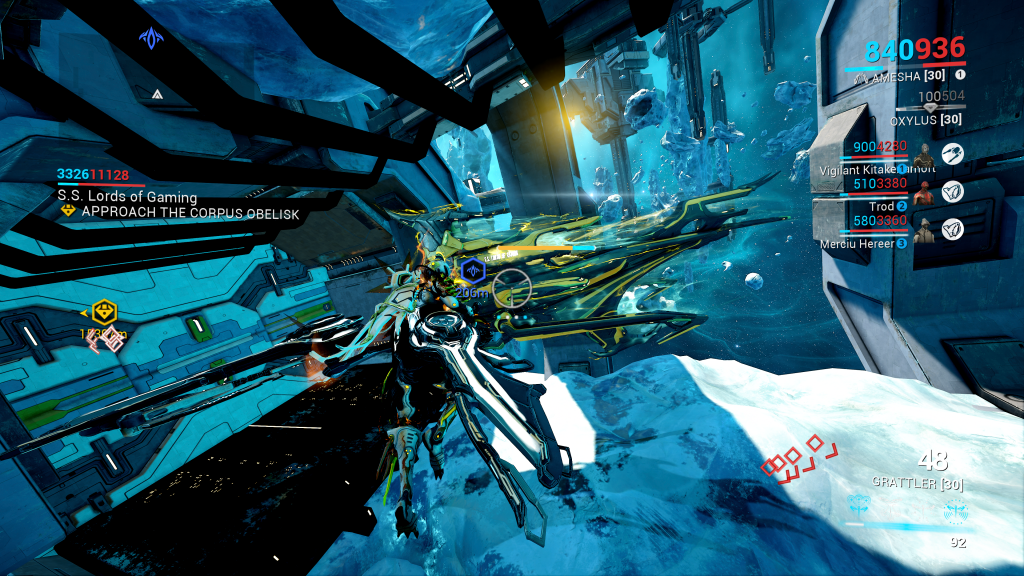 Flying through a separate star chart to Venus, and beyond taking on constantly growing odds. Finding ship parts to upgrade the Railjack Hull, Armor, and Shields. As well as finding new and exciting weaponry for the helm, upper and lower decks. There is a constant feeling of progression in this game mode. As you also have “Intrinsics” to level up. Crew members to hire to help take care of you and your ship if you play alone. It starts off with a great impression and goes even further. Like its customization.

Tuning to Your Liking

The Railjack not only looks towering. But can be modified inside, and especially outside. Not only can you find new armaments like a pair of shotgun turrets or laser beams. Or heavily fortify your Railjack to be nearly unkillable with different Shield Arrays, or Hull plating. You can change the color of the interior, and exterior. Name it, and add an emblem to the side for some extra flavor. But you can also use Railjack exclusive mods to change how your ship performs. 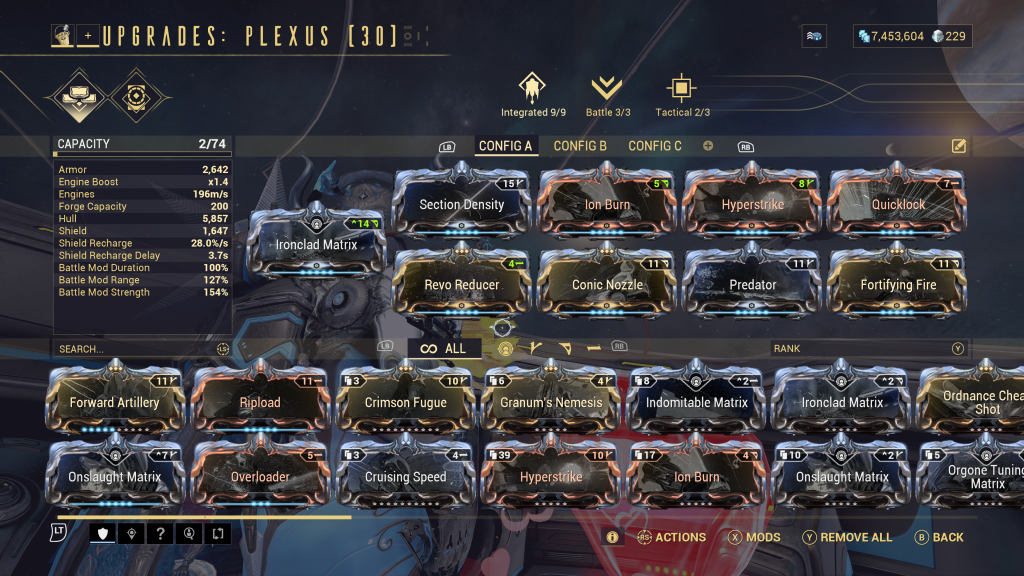 You can modify the damage, critical chance, and critical damage from your turrets. Increase your flying speed for more maneuverability. As well as add some enhancements to out-of-ship combat. Such as being in your Archwing or being aboard a regular playable environment. Like the inside of a giant military ship from the Grineer or Corpus. The inside of an ice mine or asteroid. The ship’s interior forge can have costs reduced or the time it takes for it to be cooled down lowered.

You can make your Railjack exactly how you want it and have Intrinsics take it to new depths. The Intrinsics system allows for you to level up multiple facets of your ship. Such as Engineering which is useful for repairing your ships and using the forge. Gunnery improves how the turrets perform. Or Command which opens up opportunities to buy crew, level them up, and more. The best part is, that you don’t have to pick between using any of these. All of their passives stay unlocked when you upgrade them which is very satisfying. All you have to do is farm Intrinsic points from playing in or out of your Railjack. 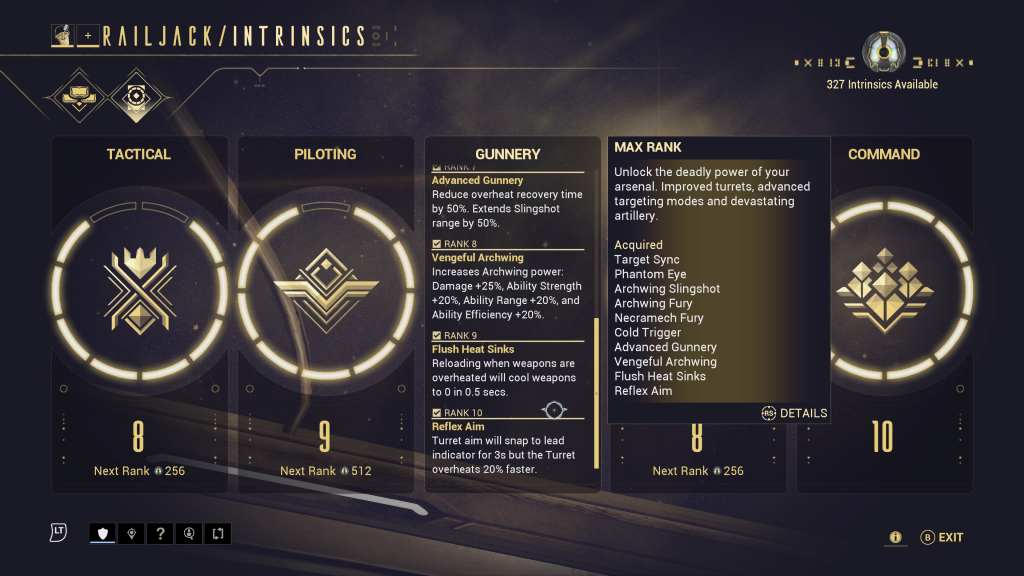 The meat and potatoes of Railjack is its gameplay. Navigating as the Railjack feels very similar to the flawless movement in Chorus. While it also has a star chart and certain mission variants from the core game that brings a sense of familiarity. Every enemy that flies around taking shots at you is always marked so you just have to track them down in dogfighting that feels very engaging and then swap to special tactics to take down Crewships. 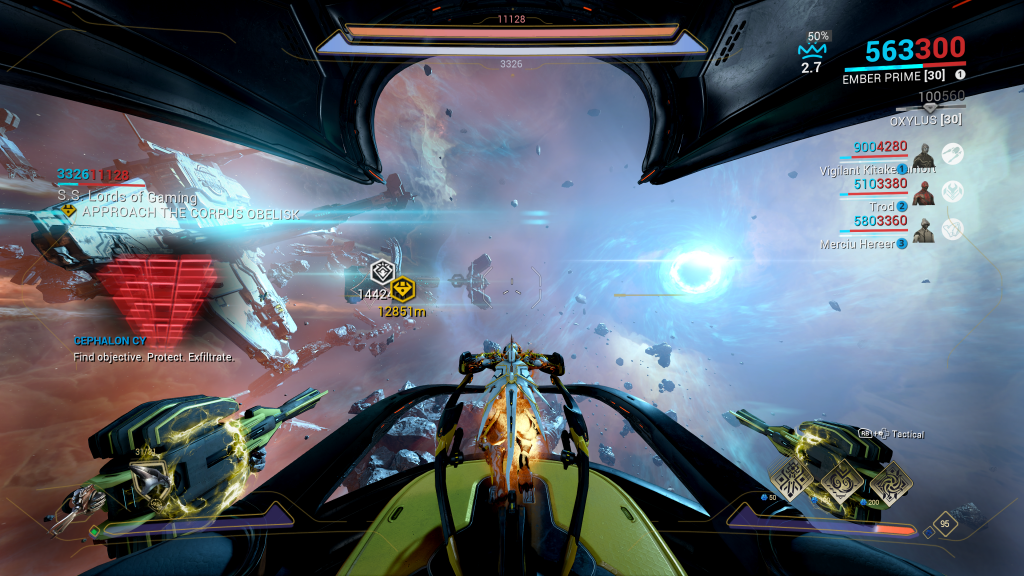 These have health bars similar to regular enemies but require you to use the very limited Forward Artillery Cannon to blow them up when they’re marooned. Blowing them up never felt old, like I was a spider eating prey caught in my web. After clearing the air you can finally board a variety of different objectives. You can either go inside an asteroid base and blow it up. Destroy the core of a Corpus ship, head back outside and pierce certain points to blow up that same ship. Or board a Grineer galleon to take down its captain.

But there are surprise areas and places to go and things to see outside of these missions. Such as Void Storms that function like a fissure from the core game. As well as mysterious alien ships with pitch black interiors sometimes illuminated with blood red lighting and gray exteriors. Raiding these felt amazing. They were a true high point to the space-faring adventure. The way Railjack grips me while playing this is unlike most other games that I play. 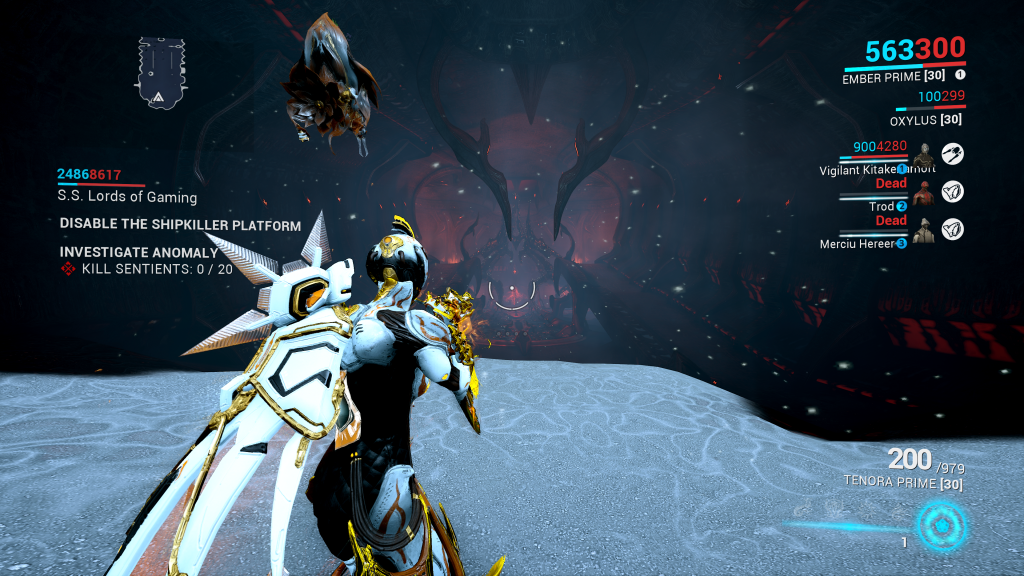 What’s a little Spare Pirate adventuring without some treasure to take back to the surfaces with you? Railjack hosts a unique warframe “Sevagoth” that has 3 fully customizable portions for him. The regular warframe, and a shadow variant that gets summoned if he dies and kills enemies to resurrect him. As well as the claws of that shadow. He’s a fantastic frame for solo players since he can die a multitude of times and if you just eliminate enough enemies you can keep coming back. 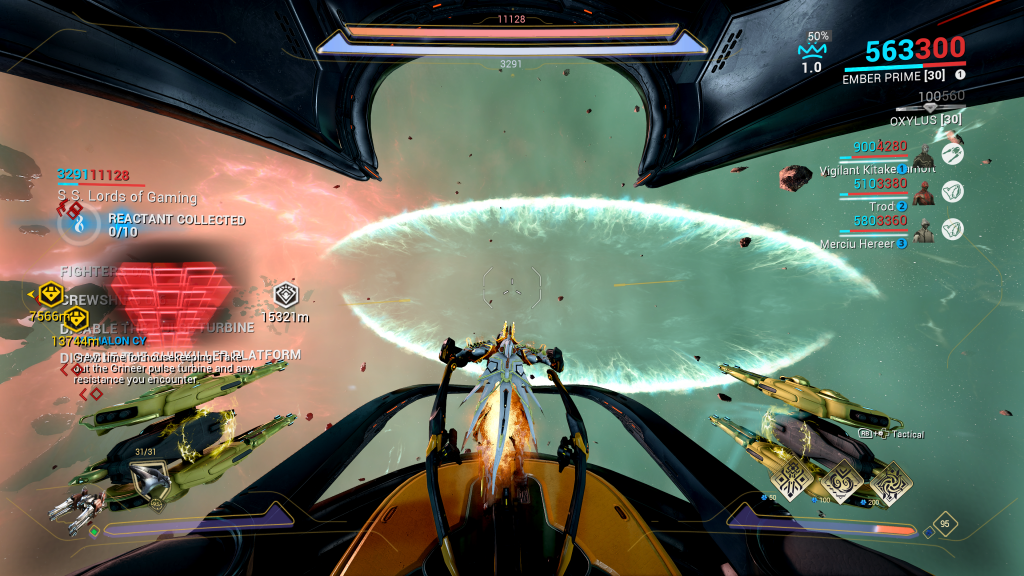 There are multiple weapons as well. Such as the heavy blade “Pennant”, the Corpus rifle “Ambassador”, or Sevagoths signature weapon “Epitaph”. As well as a unique companion with Railjack-focused abilities named “Nautilus”. All of these and their parts can be found and built by simply just playing the game mode. Letting you enjoy the amazing multipart gameplay along the way.

Warframe is a game of many, many systems. However, Railjack is a completely different beast. Having a whole different game mode with rewards that matter in the core game. As well as allowing for free form customization with a meaningful progression system. A personal crew you can rely on in the solo play. As well as tons of different playable environments with gorgeous sights, and wonderful sound design. Railjack is something every Warframe player should invest time into. Stop being just a Space Ninja… part-time as a Space Pirate!