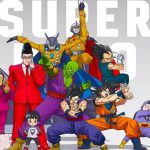 This past weekend something crazy happened. Anime has taken over the top spot at the box office. Dragon Ball Super: Super Hero beat out Beast to take number one.

Dragon Ball Super: Super Hero was released in 3,018 theaters as it had no issues grossing $20 million in its first weekend. This is something rare that doesn’t usually happen over here in the states. At the moment this movie has grossed $25 million internationally bringing the worldwide total to $45.2 million. Expect the total to get well over $100 million as the Summer movie season comes to a close.

Beast was looking like it would have had no issues taking over the box office this weekend. Opening in 3,743 theaters one would think this film was going to do great. At the moment it grossed $11.5 million this weekend. Look for this movie to maybe make more than $50 million in its entire run at the theaters. Bullet Train was able to gross $8 million this weekend bringing its worldwide total to $149.9 million.

Expect some of these total to drop more as school starts for most of the country.

This coming weekend look for a group of movies to be rleeased. Breaking, Three Thousand Years of Longing, Samaritan, and The Invitation. Given that the box office has been slipping for a few weeks don’t expect any of these movies to bring in the big money. It might be best to wait to watch some of them on a streaming service. Players can find themselves enjoying some Dragon Ball Super fun in Fortnite. A cross over event is currently happening in which players can unlock certain items from the show.