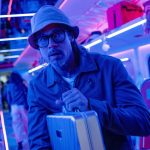 You are reading
Bullet Train Takes on the Box Office

It seems that the Summer box office is starting to slow down. This past weekend Bullet Train was able to take that top spot. It really didn’t make that much money when you compare it to how Top Gun: Maverick and Thor: Love and Thunder did in their second weekend.

During its second-weekend Bullet Train was able to gross an estimated $13.4 million. While this really isn’t a huge number. This is enough to get to number one. Fans of the movie can actually pre-order the digital release for $19.99. At the moment we don’t have a home release date. This movie is sitting at $114 million worldwide. Taking second place is the animated DC movie DC League of Super-Pets.

This DC film was able to gross $7.1 million. It seems like a huge disappointment given the actors in this film. Currently, this movie is sitting at $109 million worldwide. Top Gun: Maverick was able to slide into that third spot at the box office. It has now grossed $1.3 billion. I guess it was a great thing to keep this movie on ice for so long during the pandemic. Fans of the classic E.T. the Extra-Terrestrial were able to gross a little over $1 million at the box office. This rerelease was only released in 389 theaters.

This next weekend look for Beast to be the only movie that will be released in a large number of theaters. After that fans can look forward to Samaritan, Three Thousand Years of Longing, Breaking, and The Invitation. If you need to watch a good Vampire movie go and check out Day Shift on Netflix. This Jamie Foxx movie is well worth the time spent watching it.