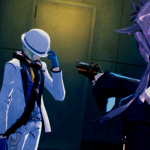 You are reading
Soul Hackers 2 Review: A Stylish and Emotional Journey

Soul Hackers 2 is a turn-based JRPG developed by Atlus. I must come clean, I have never played a Persona game, Shin Megami Tensei, or even the predecessor to this game, Soul Hackers. This being my first game by Atlus, I have to say it was a very excellent first impression. From its cinematic opening to the introduction of the story, there was a certain mysticism and class that smoothly onboarded me. Allowing me to not only find a spectacular gameplay experience but a story with some of the strongest characters I’ve seen in recent years.

Basic Story, But Strong and Deep Characters in Soul Hackers 2

The story of Soul Hackers 2 is very basic. It involves the standard Japanese role-playing game bingo card. Starting with items with supernatural properties that if they fall into the wrong hands they would be devastating. But around the first few hours of this story, I became immediately impressed by the personalization of every member of the main cast. The way their stories are intertwined with the main plot uplifted the narrative and gripped me. 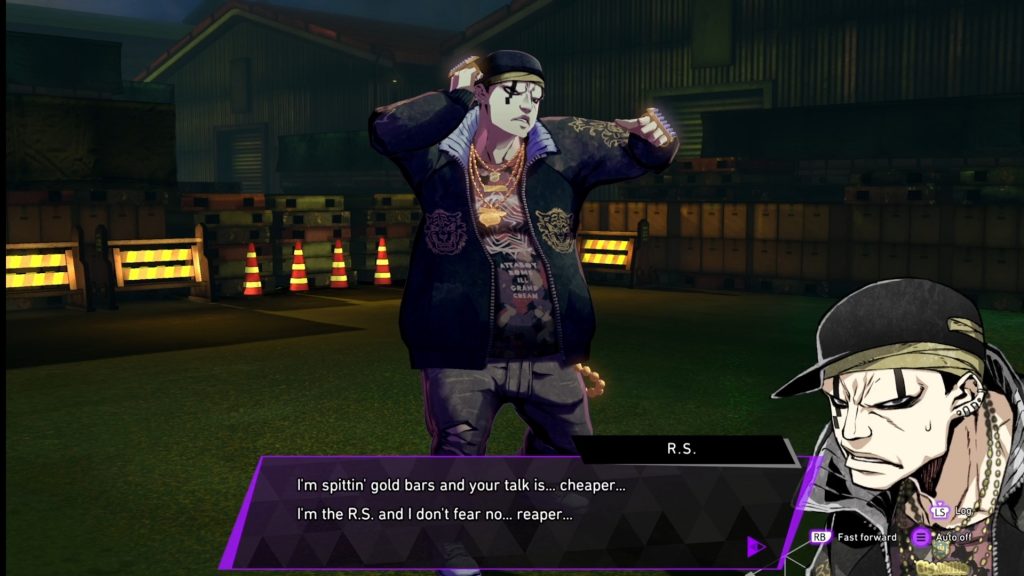 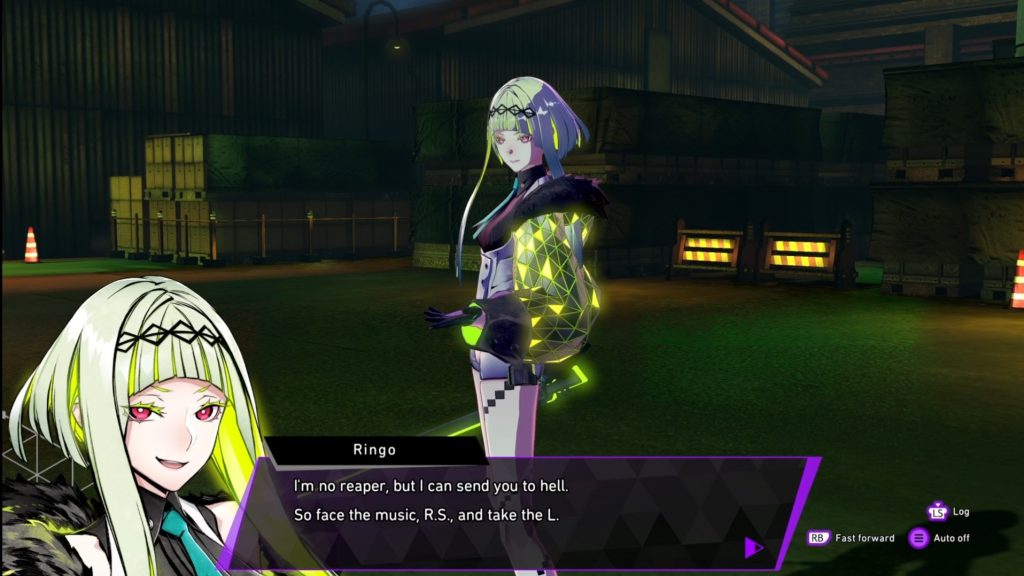 It all starts with Ringo, the main character, giving the main cast, Milady, Arrow, and Saizo, a second chance at life. Each character was betrayed by someone important in their life and they use this opportunity to make things right. Every character is distinct from one another due to how they act and handle the situations they are in. Milady lashes out in anger constantly. While Arrow has to fight his best friend over a conflict of ideals, and Saizo has to sway the love of his life from harming people.

Each character gets a lot of screen time to handle the subplots that connect with the story in very important ways. Every scenario was moving and excellently written. Each character has strong voice acting as well. It is hard to pick a favorite performance between them since they balance out serious, normal, and comedic moments perfectly. 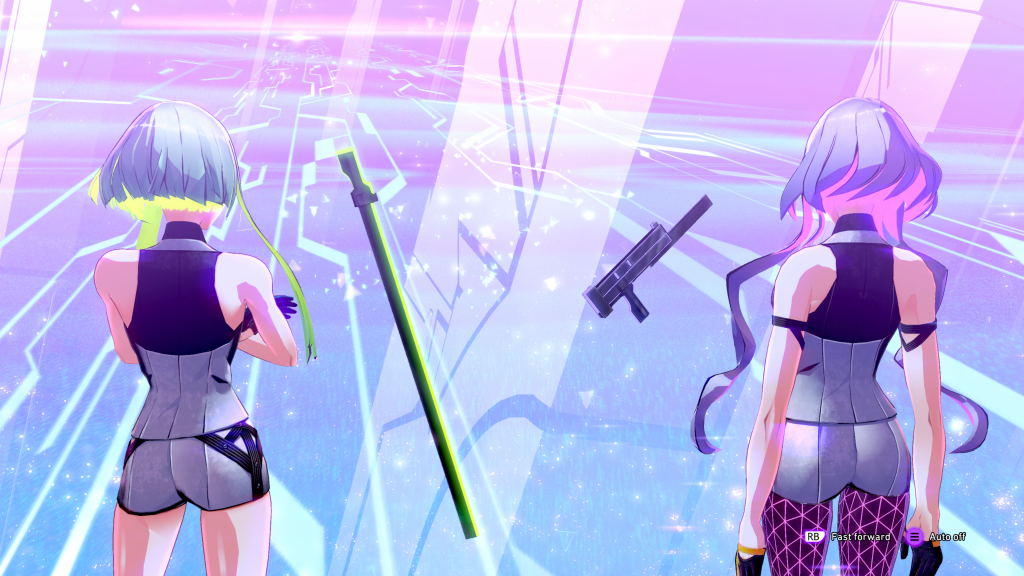 All of this, alongside a brilliant twist that left my mouth agape in awe, always kept me invested and wanting to see more. But in between the copious amounts of story, there is a deep and satisfying gameplay system to enjoy, in and out of combat.

The combat in Soul Hackers 2 is addicting and rewarding at the same time. Since I am new to Atlus games, the combat took a few encounters to get used to. But the guidance at the beginning never felt too intrusive. Your party takes a turn to initiate attacks against demons and the demons do the same. Sounds simple, but there are a few systems that go hand-in-hand with the attacks you have.

Every demon you face has a few weaknesses that if you hit them with that type of attack it deals more damage and gives a stack to the Sabbath system. Sabbaths activate at the end of the player’s turn to deal bonus damage that cannot be nullified by demon defenses. These systems are fantastic for cleaning up encounters in a few turns and can make a difference in boss battles. 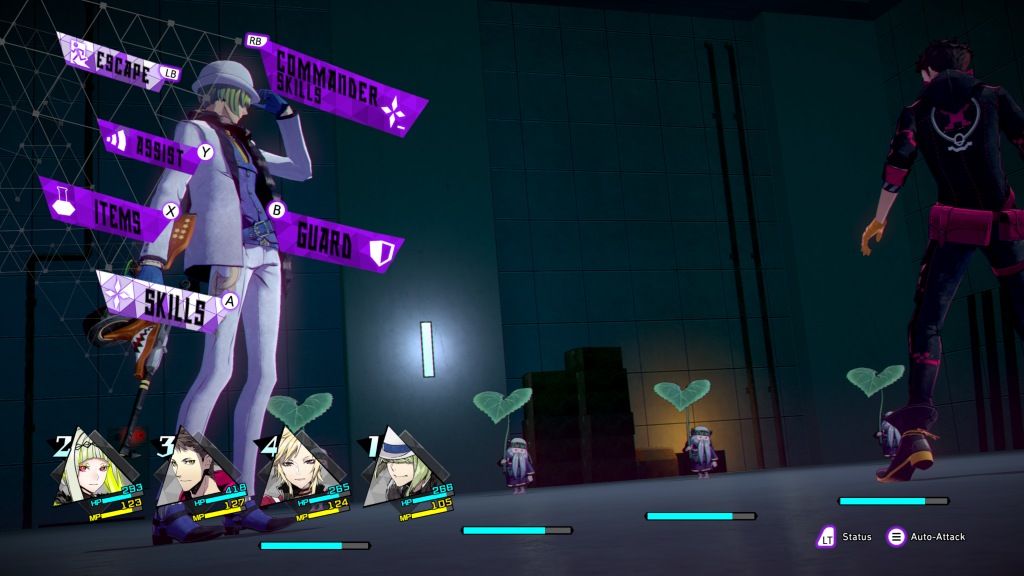 Every boss fight felt long due to the time it takes to find every weakness and exploit it. While fighting demons was always quick unless they were at a higher level than me, getting the right abilities however is the tricky part. As in this game, the characters themselves do not get new abilities. Rather the demons they collect and equip over time do.

There is a staggering amount of demons to collect and level as you play the game. Each one will have defenses and weaknesses that the character inherits. You can not have duplicates of the same demon, so I have to look for types of demons that work well with each character and make a unique composition with them. Such as giving Ringo a healing-based demon, Arrow a gun, and a lightning-focused demon. While Milady should be paired with a fire-focused demon and Saizo with a wind and support ability-focused demon. 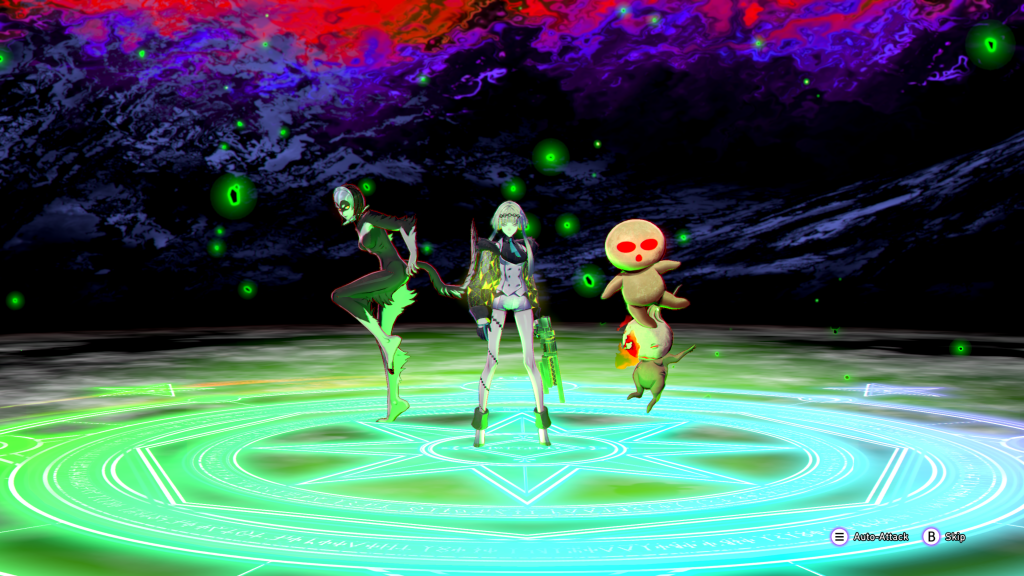 These systems are very deep and synergize with one another. You can even fuse demons together to get new ones and have that new demon inherit abilities from the two that created it. You can also buy demons you collected but lost due to the fusion system. I spent hours crafting perfect builds for each character. Since there is a lot of experimenting to find the right demon that grants the right defenses and attacks. But I always welcomed the break it provided with the amazing combat. It seemed overwhelming at first, but quickly became second nature.

In the Streets of Japan

In between the story and combat in Soul Hackers 2, you can roam around in various locations with a decent amount of side content to enjoy. You can pick up side quests from a vendor, and initiate hangout events to get to know characters more. Go into multiple shops to buy healing items or food to give you passive buffs while you explore demon-infested areas. Some of the buffs include recovering MP or gaining more experience when fighting higher-level demons. Or spend a lot of time upgrading at the COMP smith, a vendor that unlocks a ton of necessary upgrades for the characters in your party. 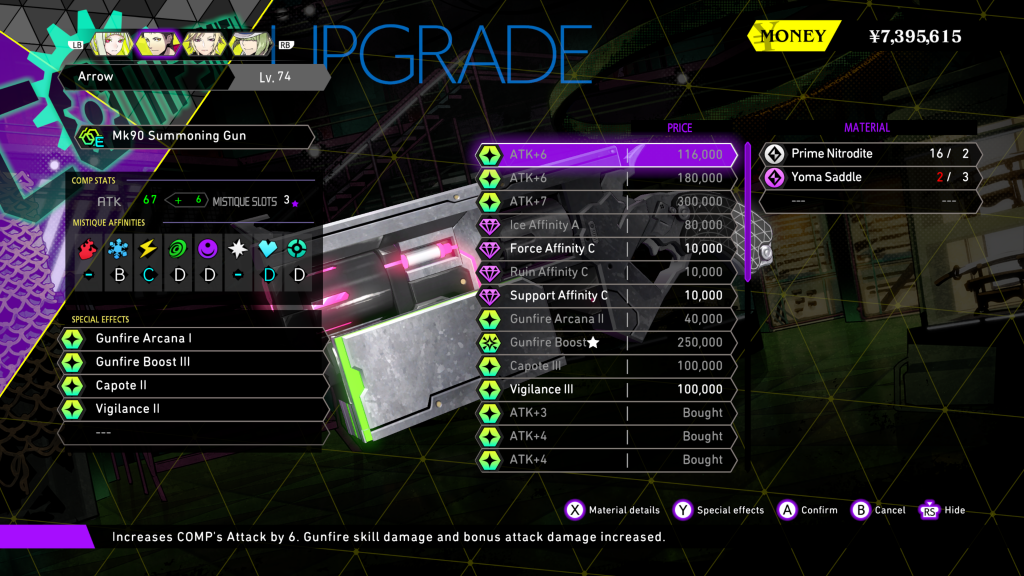 At the COMP smith, you will need a lot of currency and materials dropped by demons. This incentivized me to always go back to previously explored areas to get the materials I needed. But none of the upgrades felt like a waste of time. Getting more attack damage for the character’s weapons, increasing demon collecting capacity, and decreasing the costs of certain attacks were key to victory in tougher battles.

I made regular trips to the COMP smith to make sure my characters were up to snuff. But despite the necessity between the demon vendor, the regular shop owner, COMP smith, and a special item vendor that turns spare items into important healing items such as revives or party-wide buffs, I enjoyed the charisma each vendor had. Especially the COMP smith and demon vendor.

While backtracking in other games can be a chore, Soul Hackers 2 remedied this issue. There are areas where you can find consistent new and old demon encounters, while also getting more of a character’s backstory. The Soul Matrix allows you to explore gigantic areas, learn vital information about a character, and unlock the unique passive abilities of a character. It provided a unique twist that I thoroughly enjoyed. It was rewarding and fun to just explore and be rewarded with these abilities.

Saizo gains the ability to improve the effectiveness of healing items and sometimes not consume one. Milady is able to regenerate MP by killing demons, and Arrow is able to shield party members close to death. Since these upgrades are unique to the Soul Matrix, I always went back when I could. You can find a myriad of items and demons to collect by interacting with the demons you have that scout the area. 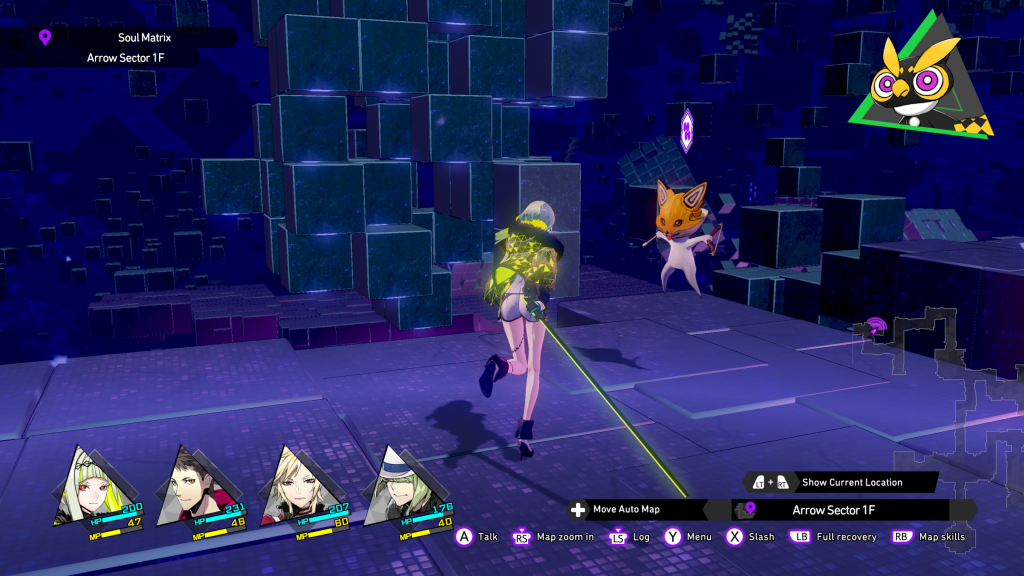 But as you progress further the Matrix as well as every other area in the game starts to become annoyingly labyrinthine. Discouraging natural exploration if I begin to feel lost. On multiple occasions, I ended up leaving these areas to load back in and try a new path instead of going in circles. 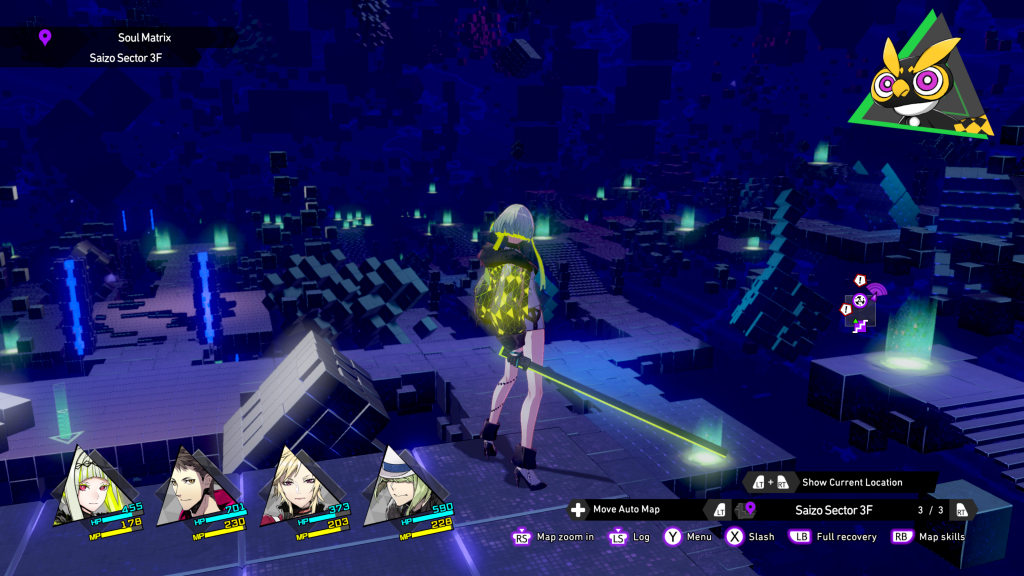 However, the details and cutscenes you get to watch for every character add so much to the overall narrative. Having a zone that not only rewards the player in a gameplay sense but also rewards them with more story details is incredible and became a highlight of the overall experience of the game for me.

I played Soul Hackers 2 on the Xbox Series X and experienced no issues. No stutters, freezes, crashes, or performance problems. It was a squeaky clean experience. But it does have some issues worth noting. For instance, not explaining to me that I can slash away risky demon encounters despite the tutorial saying I cannot. The main menu assigned to the Y button caught me off guard a lot.

Due to the fact when I pressed the start button it would load up the fast travel menu. This does not sound like an issue, but you cannot press B to back out of that menu. So you have to fast travel to the location you already are if you pressed it by accident. Which is very bad considering it wastes my time. I would not want the button reassigned, but at least have the option to back out of this menu. 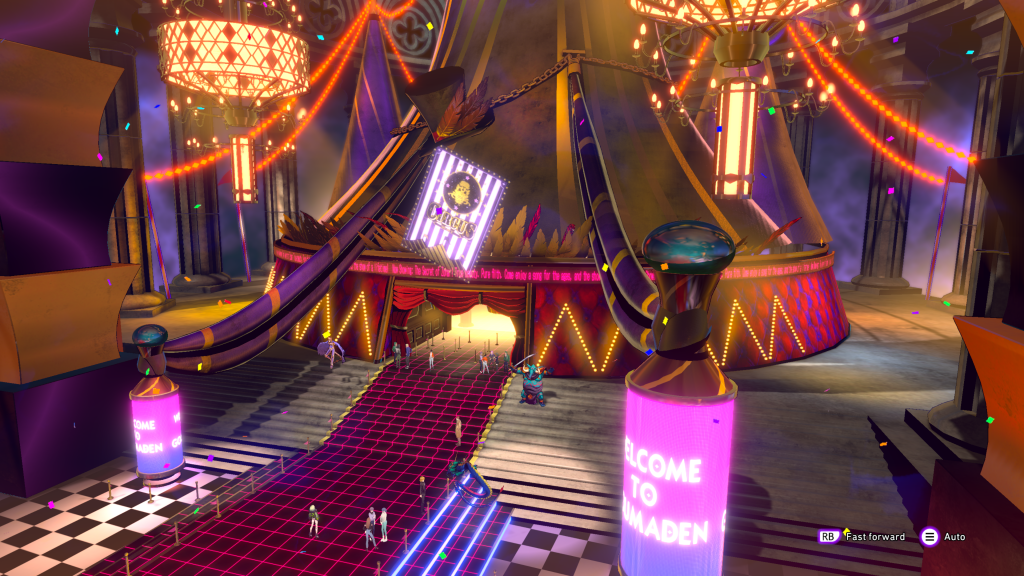 Aside from that, the writing in the game is stellar. As well as every location in the game feeling and looking unique. My favorite was the Roppo Realm. It is where you fuse demons and it resembles a circus. The soundtrack is absolutely incredible though. The main battle music and regular boss music were among my favorite tracks. Alongside the one for the Roppo realm.

Soul Hackers 2 was an absolute treat. The style on display from every character, location, and demon was fantastic. The story, despite having a basic plot, had incredible characters to back it up. It also knocked several emotional moments out of the park. The deep and engaging combat system with the staggering demon collecting aspect was fun and rewarding.

All of this coupled with one of the most unique areas I’ve seen in a game like the Soul Matrix. Which gave me so much to enjoy in my playthrough, despite its annoying design at times, leaving me eager to start again. Soul Hackers 2 is an easy recommendation, even if you have not played a game from Atlus.

Soul Hackers 2 is available now for $59.99 on the Xbox Series X|S, Xbox One, Steam, PlayStation 4, and PlayStation 5.