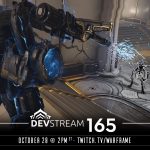 You are reading
Warframe Devstream 165 Breakdown

Devstream 165 has just wrapped up on the official Warframe channels. This was a decent-sized stream with some exciting news regarding upcoming updates. As well as some updates to changes to certain warframes and what to expect throughout November. Here is everything from the latest Devstream with little to no spoilers. 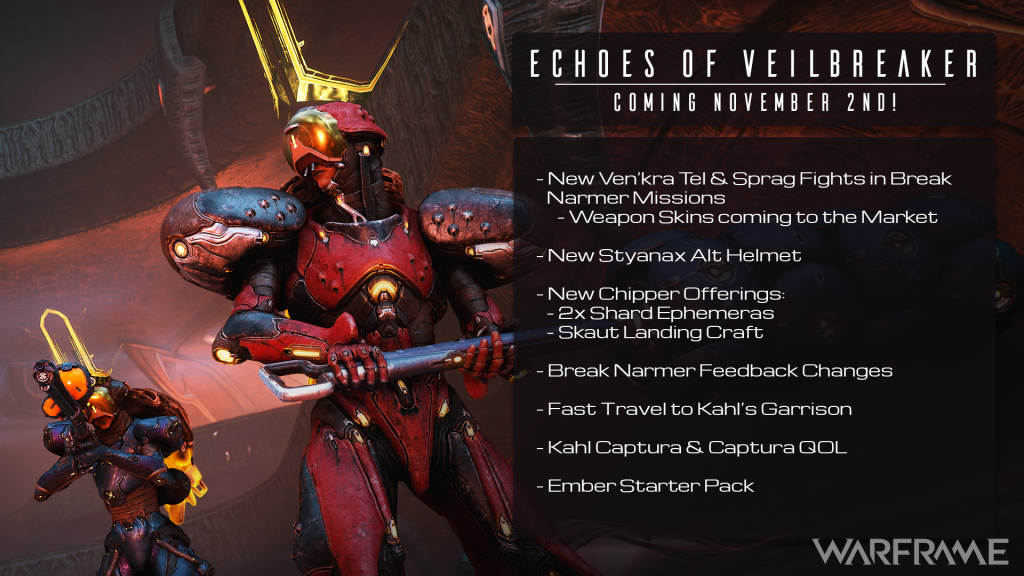 All of the details regarding Echoes of Veilbreaker were revealed. This included the release date and tons of surprises. Which will include the following:

A day afterward, the new Prime Resurgence including Saryn and Valkyr Prime will be coming. So get Wukong and Equinox Prime while you still can!

The Duviri Paradox has been Delayed

During Devstream 163, there was a re-run of the Tennocon in-game event “The Duviri Amphitheatre”. At the end of this event, there was a message that popped up that was not in the original in-game event simply stating “See you in 2023!” This was suspicious but the team elaborated that the highly anticipated and ambitious open world, and cinematic expansion will not be arriving this year. Instead, it will be dropping next year but no timetable was clarified.

This is very understandable considering The Duviri Paradox is unlike anything that has ever been added to Warframe in its nearly ten-year run. There were some details regarding the progress of cross-play though. Xbox and PC will remain cross-play while PlayStation 4|5 and Nintendo Switch will get tests sporadically over time. Expect a full status update by the end of the year. Most likely at the next Devstream or the first one of next year. 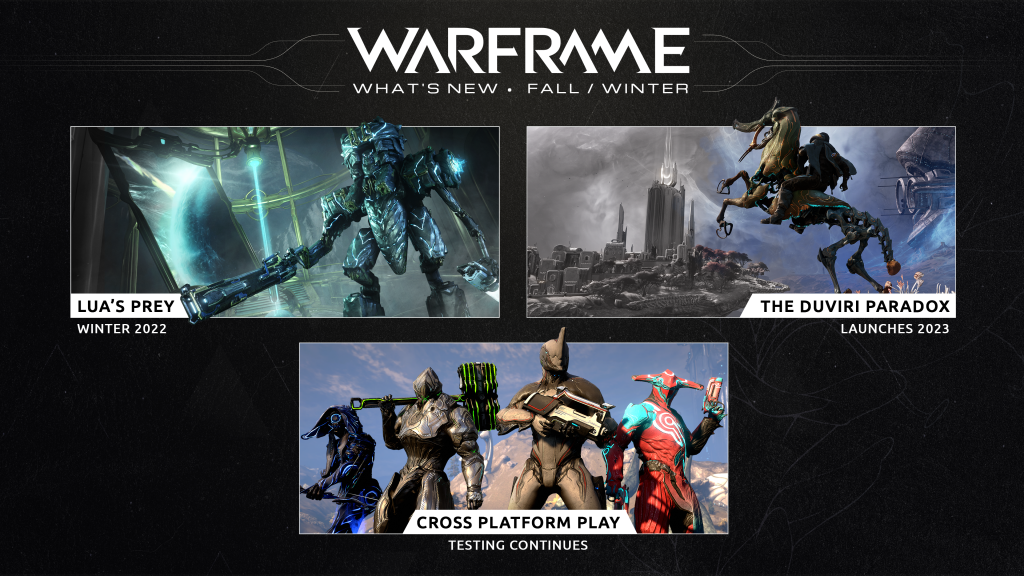 However, to hold over players until the expansion arrives will be the upcoming update “Lua’s Prey”. Which will come with a ton of stuff to enjoy in the meantime.

Taking The Duviri Paradox’s place this year will be “Lua’s Prey”. This will include a new survival mission with a few twists. First off will be the usage of Necramech’s in this mission and each mission will have a “Narrative Driven Room”. No details on what that means just yet. There will be colorless areas in this mission that if you stand in them you will receive buffs. However, there will be a unique enemy that spawns at each five-minute interval that you will need to kill quickly. As it will drain your life support quickly. 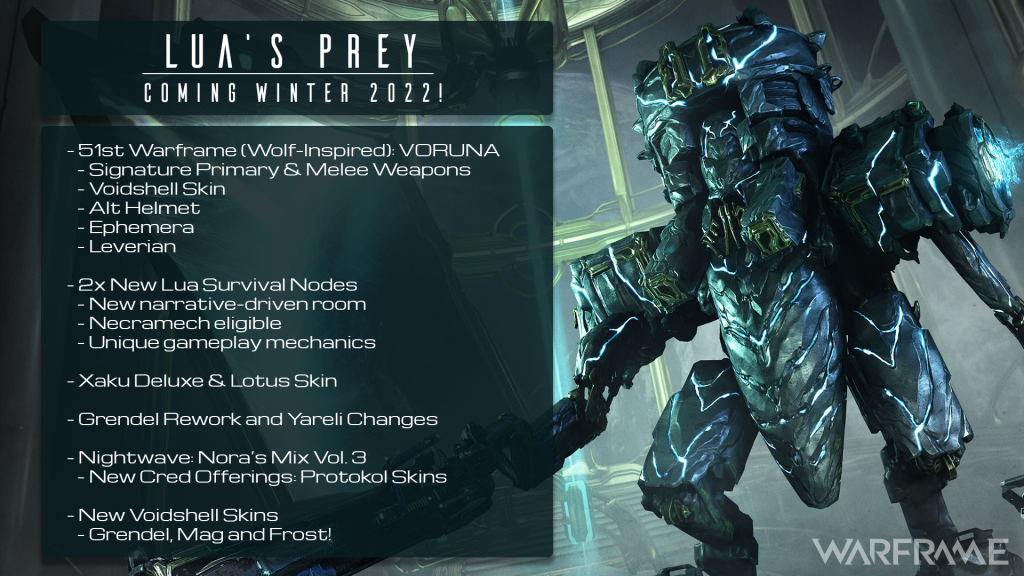 There will be two variants of this survival mission. A normal leveled one and a very high leveled one. The difference between the two will be the drop chances for loot coming with this update. Such as Voruna, the Wolf-inspired warframe. As well as her signature Heavy Axe and Sniper rifle. No details on the weapon stats just yet. With very few details on Voruna aside from her passive being reliant on which wolf is summoned from her first ability. This might function like Chroma’s “Elemental Ward”.

The other additions to this update are as follows: 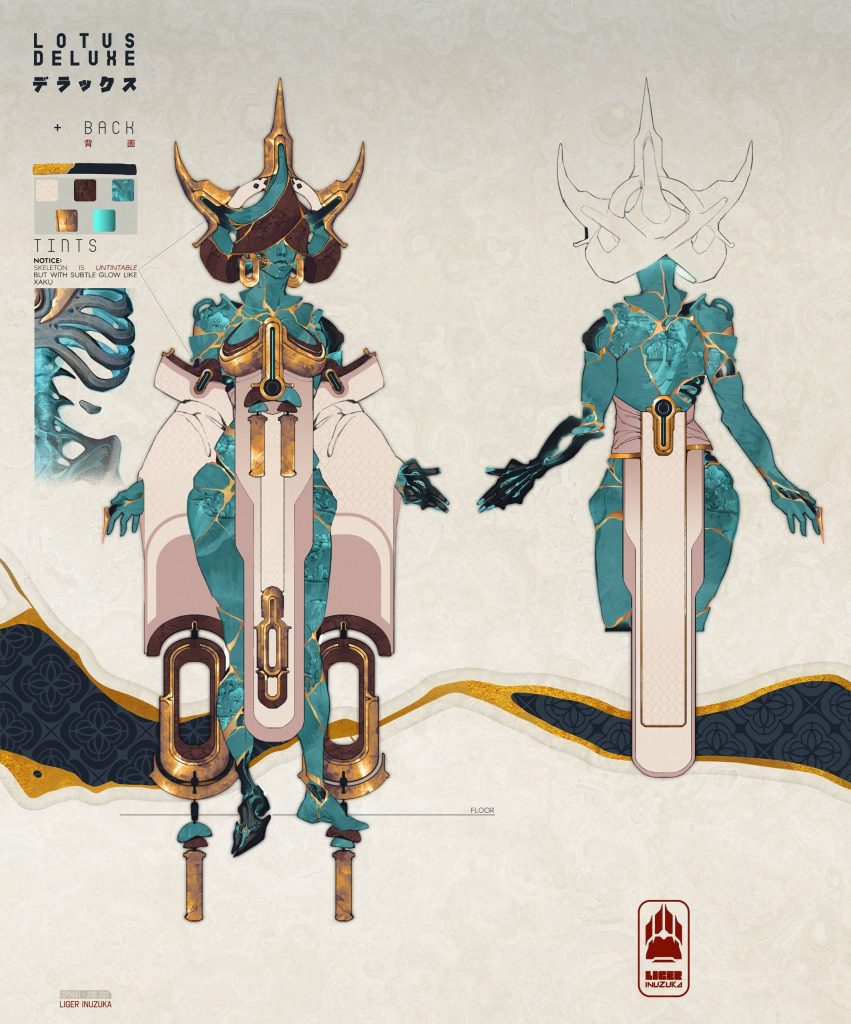 Next Nightwave and Final Details from the Devstream

The next Nightwave battle pass is coming as well with Lua’s Prey. The only confirmed rewards from the free to enjoy fully battle pass are:

“Movember” is coming back in November. This is a fun mustache-themed charity event where every warframe can wear a mustache. Self-damage might come back to Warframe soon. You cannot kill yourself with the damage but it will knock your whole health down to 25%. Finally, players of past-generation consoles and hardware will be able to enjoy modern graphics. Please watch the full Devstream 165 here for more details on what all that means.