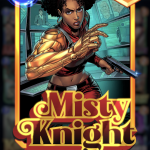 Marvel has dominated the 2010’s thanks primarily to the Marvel Cinematic Universe. That success has had little translation into the realm of video games until the last five years. Since then we have seen 2018’s Spider-Man, 2020’s Avengers, and this year, Marvel Snap. What seems like a standard mobile game with numerous gacha mechanics and monetization actually stands as an excellent deckbuilding game.

It might not be the absolute game of the year, but it deserves to be a part of that conversation.

Like many of the best games, Marvel Snap has a very simple gameplay loop. A single game lasts six rounds, and is played on a board that is split into three sections. Your goal is to earn the most points in at least two of those three sections. To earn points, you lay down Marvel superhero-themed cards in one of the three sections.

Each section rotates through a variety of Marvel locations each of which comes with its own effect. Likewise, many cards you play also have effects that range from boosting your card’s power level to changing the section’s effect. Each turn, you get an additional cost point to spend on a card to play from your hand.

Since games are only six rounds, they go by in less than five minutes each. Normally, for mobile games, here is where the game would force you to spend money to play more rounds, but Marvel Snap avoids this trap entirely. You can simply play to your heart’s content.

Marvel Snap makes it easy to keep playing even when you do not have any objectives to do (see below). The constant variety of locations ensures you rarely play in the same combination of three locations multiple times, and collecting and upgrading cards scratch the same itch that Pokémon does. Given that the game has well over 200 cards, it is not hard to see why.

Marvel Snap’s variety in gameplay and rewards ensures that players keep jumping in to perfect their decks.

The Monetization Is Not Forced in Marvel Snap

Where so many mobile games shove microtransactions and surprise payment scenarios upon their players, Marvel Snap only presents them. Yes, there is a currency that you can pay to get with real-world money, but it is doled out generously when you complete challenges for the Season Pass and Collection Level ladder.

Speaking of, yes, there is a time-gated season pass, but nearly half of the fifty-level rewards are free. After you complete those levels, you will earn a “Season Cache” filled with in-game currencies every time you level up the season pass. These caches rarely have a new card itself, which is a bit disappointing. They do however give you funds to continue improving your cards. 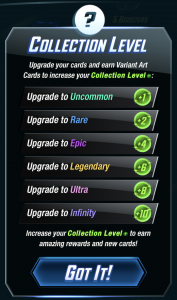 To build out your card collection, you need to upgrade your cards. Every card starts at the “common” level with a grey frame, which levels through six different levels of rarity. When you upgrade your card, you progress up the Collection Level ladder and unlock a new card every so often.

Those new cards compromise each of Marvel Snap’s “Card Pools” where certain cards are found in specific Collection Level ranges. For example, Pool One includes cards like Iron Man and Bishop that unlock from Collection Levels 18 – 214.  Your Collection Level never maxes out, as it is primarily a reward system for supporting your card upgrades.

Colors aside, each level cosmetically changes the card. Green framed cards break the character out from their frame, blue cards give off a 3D effect when you inspect them, and so on. Tying these upgrades only to cosmetic changes gives a sense of accomplishment without locking boosts behind a paywall.

More importantly, numerous cards are “Variants” of other cards where the art changes. Every card has multiple variants, ranging from classic comic styles to pixellated art styles to Seasonal-themed styles. It feels similar to collecting pro athlete’s cards from various points in their careers.

When building a deck, you have a variety of options to choose from within your deck. Many cards have “Variant” versions that have the same ability, just a different card design. These versions will uncommonly pop up as a Collection Level Reward but are also available in the shop. You can only choose one variant per card, but there is no limit to how many decks you can build.

One last point of order on deckbuilding. You only get one of each card in your deck, including Variants. While mechanics that duplicate your cards exist, you can not preload your deck with duplicates. If you have Captain America’s card and a Variant Captain America card, then you get to put one of those two in your deck once.

In a game with incredible combos that rely on your cards and the location where they are placed, this rule was a necessary one. It serves to provide added depth to the collection mechanic as well.

The only strike against Marvel Snap happens when you rework your turn before you submit it. The order of cards played matters, as your cards are revealed one at a time.  However, when changing what you do in your turn, you need to return your cards to your hand in the order you initially played them.

Marvel Snap not only expands upon notable deckbuilding ideas, but it also hammers home how grossly unnecessary monetization can be. Overmonetizing your experience is the foulest way to corrupt a fun experience into a soul-sucking ritual.

An excellent gameplay loop, paired with enjoyably rewarding progression systems does what I never thought I would do. I have placed a mobile game in my top ten, possibly top five video games of a year.

9 Overall
Facebook Twitter Google+ LinkedIn Pinterest Tumblr
Previous article Gears of War is Coming to Netflix
Next article Mass Effect: What We Got On N7 Day 2022