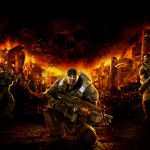 You are reading
Gears of War is Coming to Netflix

Fans who wanted to see a live-action version of Gears of War finally have some good news. With a lukewarm reception to Halo on Paramount+, it didn’t seem like we would get any more adaptations. Netflix has other plans as they have just announced that Gears of War is coming to the streaming service.

Netflix is developing a live-action Gears of War movie on the streaming service. The Coalition has partnered with the streaming service to bring this adaptation to life. Additionally, another animated project was also announced for after the movie. If everything goes well fans can expect more than just these two projects. I guess as long as it has nothing to do with Gears POP everyone will love it.

Gears of War was released 16 years ago today and to mark the occasion, Netflix has partnered with The Coalition to adapt the @GearsofWar video game saga into a live action feature film, followed by an adult animated series — with the potential for more stories to follow! pic.twitter.com/3zInFSnUu4

Nothing else has been announced regarding Gears of War. At this moment we can only hope that the right people will be cast. I think this one tweet has a pretty good list of people to play these characters. This adaption will hopefully be faithfully close to the video games story. It would be disappointing to see this stray away from what the fans love. The original Gears of War game was released way back on November 7th, 2006 on the Xbox 360. It has spawned numerous sequels and even a few different games (Gears POP).

When it comes to video games being adapted into movies or tv shows we haven’t had the best track record. The next game that will be coming to tv is The Last of Us which will be premiering on January 15th, 2023.