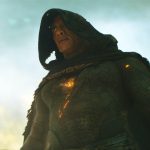 You are reading
Black Adam Continues to Dominate the Box Office

Black Adam was able to dominate the box office this past weekend. It was a relatively quiet weekend as the second-place film grossed under $10 million in its opening weekend. One Piece Film: Red, unfortunately, couldn’t get past that second spot.

In its third weekend, Black Adam was able to stay on top. With $18.2 million this weekend, it wasn’t a problem to stay on top of the box office. While this movie hasn’t really destroyed the box office as some superhero movies have done, it did bring back our Superman. Domestically, this film has grossed $137 million and $184 million internationally for a worldwide total of $321 million. It doesn’t look like this film will be breaking that $500 million mark.

Anime has been doing great at the box office this year. One Piece Film: Red grossed $9.3 million this weekend. This film has a worldwide total of $141.5 million so far. Ticket to Paradise came in third place with $8.5 million. This film brought back George Clooney and Julia Roberts, who first worked together in Oceans Eleven (2001). The horror movie Smile is a weekend away from breaking $100 million domestically, so expect this movie to spawn plenty of sequels in the future. This was the film that was able to gross $3.9 million at this weekend’s box office.

This holiday weekend, expect Black Panther: Wakanda Forever to completely dominate the box office. Well, we should expect it to take over the box office for the next couple of weekends. Look for Thirteen Lives and She Said to be coming out later in the month. Nothing will be able to stop the Marvel juggernaut as it continues to print money for Marvel/Disney.