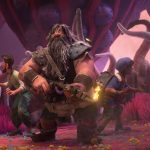 You are reading
Strange World Bombs at the Box Office

Strange World takes second place in its opening weekend. This film bombed an opening holiday weekend. Some movies just need to be released on a streaming service. While others like Glass Onion: A Knives Out Mystery should be released in theaters. Black Panther: Wakanda Forever continued to print money as it stayed on top.

Sometimes Disney just doesn’t have everything working for it. Strange World is going to be losing over $100 million in its theatrical run. This film was expected to gross around $30-$40 million at the box office. Being in over 4,000 theaters it seemed like it would be easy to make that kind of money. Yet, without the viewers, this film grossed $11 million. The pandemic has changed the theatrical release landscape. It will be interesting to see how things change at Dinsey with Bob Iger making a return as CEO.

Glass Onion: A Knives Out Mystery was only released in 696 theaters. Netflix released this film a week. Think of this movie had been released in over 4,000 theaters. It easily could have grossed over $30 million in one week.  This film was able to gross an estimated $9.4 million in its opening weekend. Look for this film on Netflix on December 23rd. Black Panther: Wakanda Forever was able to gross $45.9 million as it crossed over that $600 million worldwide mark. Don’t expect this movie to drop from number one until the second Avatar movie is released.

Devotion was also released this holiday weekend. It was able to gross $5.6 million, giving it a total of $9 million domestically. It should be interesting to see how much this Korean War-era film will gross in this current climate. If this movie had been released this past Summer it probably could have gotten a bump from Top Gun: Maverick.

Next weekend the holiday movie Violent Night will be released in a large number of theaters. This absurd Santa film with David Harbour as the jolly hero. It should be able to take second place. I don’t know when theaters will get back to pre-pandemic behaviors.