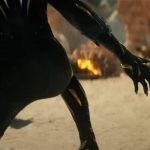 This past weekend Black Panther: Wakanda Forever was able to keep that top spot. The film had no issues continuing to dominate the box office. It was just a slow week for the theaters.

Black Adam dropped down to fourth place this weekend. This film only grossed $4.4 million as it was knocked down by The Chosen Season 3: Episodes 1 & 2. It is a Fathom event that was able to bring in $8.2 million this weekend. DC just continues to look for some kind of balance as its movies just don’t have the power of movies like Black Panther: Wakanda Forever. Black Adam is now sitting at $366 million worldwide. It took five weeks for this film to reach that number.

It took two weeks for Marvel’s juggernaut to cross that $500 million mark. With the Thanksgiving holiday approaching expect that film to cross or get close to $700 million at the worldwide box office. At the moment, Wakanda Forever is sitting at $546 million at the worldwide box office. The Menu was able to bring in a healthy $9 million in its first weekend. This suspenseful film looks like one of those can’t-miss movies.

Three movies will be coming out this coming weekend. Bones and All, Devotion, and Strange World will all be looking to take a few bites out of Marvel’s dominance. I doubt any of these movies really push the limits or break any records. Strange World would be the only film that might make some kind of splash. However, it is a Disney animated film. At this point, it would just mean Dinsey is set to dominate next weekend’s box office if both movies stay in the top two. The only thing that could really beat Disney is the new Avatar ( December 16th) film. Yet, Disney owns that studio as well.