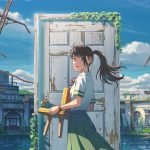 Suzume is the officially translated title for Makoto Shinkai’s recently released film in Japan, “Suzume No Tojimari“. Ever since its debut in Japan was the biggest launch for Shinkai’s films so far. Earning 1.8 billion yen at the box office in Japan since its release on November 11th. It was only a matter of time until the film would be shared abroad and it all starts with its release dates being revealed recently from Crunchyroll.

The International Release Dates for Suzume

The release dates by region are as follows:

For all additional details, such as the description of the upcoming film. You can find the full blog post here.

This will be Makoto Shinkai’s 13th film. Following the phenomenal, Your Name, Weathering With You, and 5 Centimeters per second. It will also feature music from the Japanese rock band, Radwimps, which helped bring a ton of scenes from Your Name and Weathering With You. The film’s main song is also from Radwimps. Bringing a sense of awe and wonder to the film.

If you are looking to see the film earlier, certain theaters do advanced screenings. So keep an eye on your theaters leading up to the release of the film. Suzume will only be in theaters upon release.