Here we go again with another Pokémon Double Battle Team. I wanted to find a fun baby Pokémon battle team before Scarlet and Violet were released, but I wasn’t able to. The new games have been having some issues so I decided one more time to bring another team for the Sword and Shield. The team we are going to show off today is brought to you by the BGaming YouTube channel. The doubles team for today is dubbed Mythical Genesect! 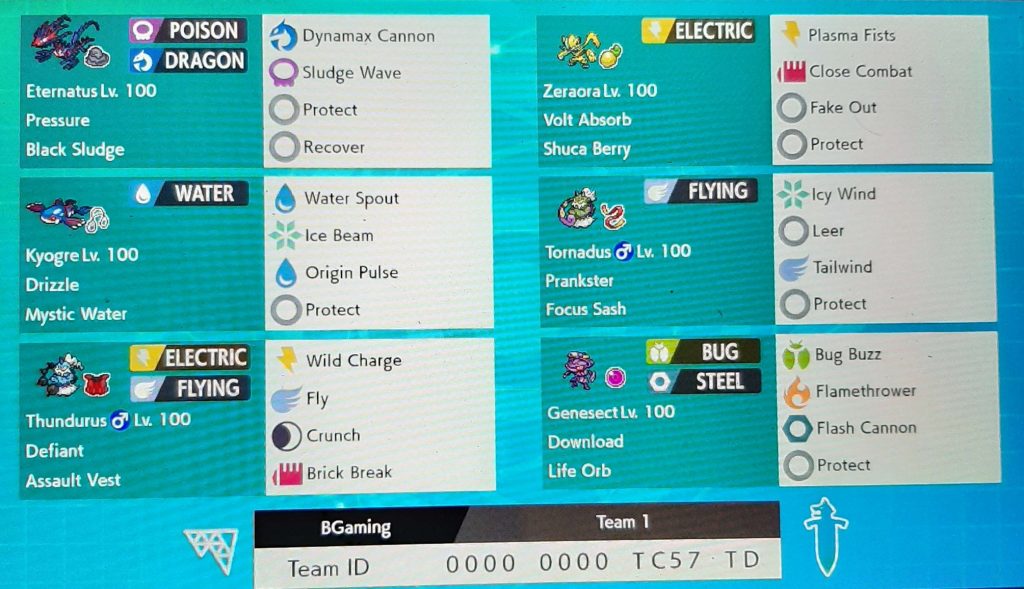 Since Legendary/Mythical Pokémon have made their way into competitive battling, I found a fun team involving one of my favorite Pokémon, Genesect. With this team, there are a few different things you can do. One of the main things we want to do is beat down with our Genesect. Life Orb on Genesect is awesome. If this is the route you want to go you can lead with Tornadus and Genesect to set up a Tailwind which increases speed. Bug Buzz being able to lower stats in this format will be good. Another way to lead is with Kyogre and Tornadus to capitalize as well.

Zeraora Plasma Fists is a really good attack that makes all normal moves electric. Plus it’s set up to be a fast Fake Out user which can cause potential flinching. Eternatus is tanky but does have a couple of attacks. Thundurus is a normal build with Defiant and Assault Vest. You have a variety of things you can do, to try and keep your opponents guessing. 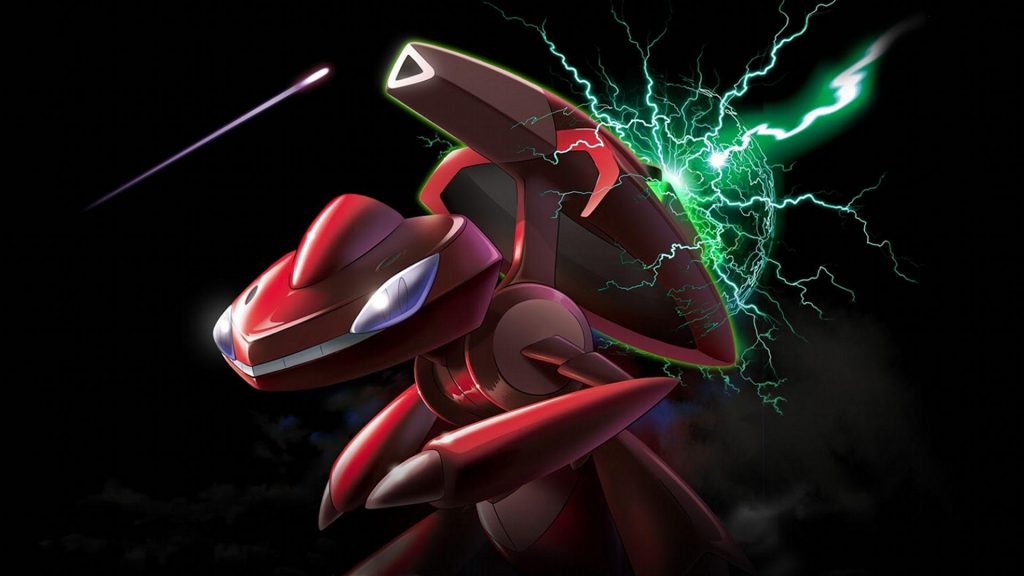 Starting off our doubles battle team is one of my favorite Pokémon the Bug/Steel-type Genesect. For this team, Genesect was the main Pokémon I was leading with the majority of the time. He is genderless like the majority of Legendary and Mythical Pokémon. He has the Download ability which checks defending Pokémon’s Defense and Special Defense then raises his Attack or Special Attack based on that. Life Orb is the item it should be holding, which boosts the power of moves but at the cost of some Hit Points each hit. Genesect should be excellent during this format but can be super weak to a specific type. Our best stats for him are Special Attack and Speed. 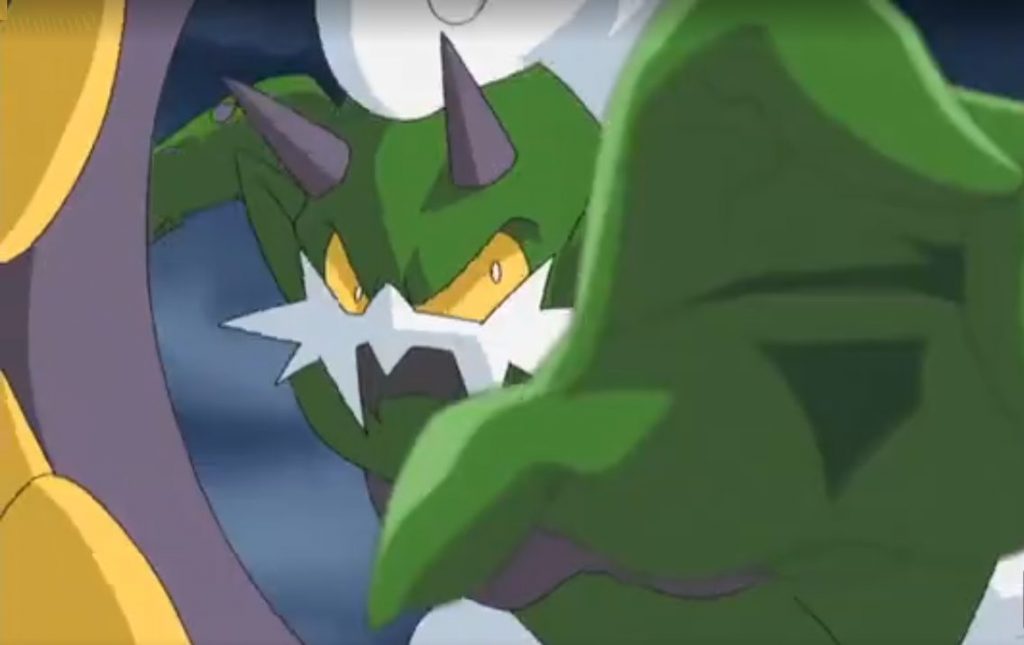 One of our other leading Pokémon is the Flying-type Tornadus. Tornadus is a male that has the ability of Prankster. This ability give priority to status-type moves. He is holding a Focus Sash which will prevent him from being KO’d once if at full health. His move Tailwind is important to try and set up so the sash comes in real handy to survive long enough if needed. Special Attack and Speed are his best stats.

Icy Wind, Leer, Tailwind, and Protect are the moves Tornadus knows. Icy Wind is an average attacking move that lowers opposing Pokémon’s Speed stats. Leer is a move that has 100 percent accuracy and lowers the target’s Defense stat. Our bread and butter for him is Tailwind which raises the Speed stat for the user and allies for 4 turns. Lastly, Protect as we know protects him from most incoming attacks, but if used in succession may fail. Electric, Ice, and Rock-types are strong against Tornadus. 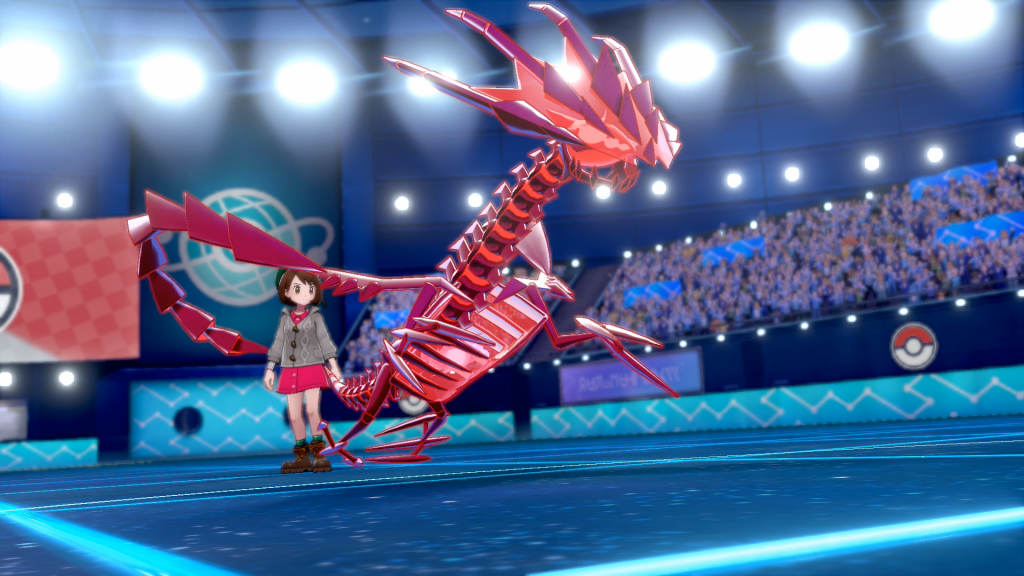 Third, on our team is none other than the Poison/Dragon-type Eternatus. Eternatus is genderless with the Pokémon ability Pressure. Pressure causes opposing Pokémon to use extra pp when using moves. He is holding the Black Sludge which gradually restores some Hit Points to Poison-type Pokémon. Utilizing this helps him remain tanky. This will damage any other types though. Hit Points and Special Attack are the 2 highest stats here.

The moves Eternatus knows are Dynamax Cannon, Sludge Wave, Protect, and Recover. Dynamax Cannon is a strong move that deals double damage if the target is in Dynamax form. Sludge Wave is a good Poison attack that may poison those it hits. Protect will protect from most incoming attacks but fail if used multiple times in a row. Then we got Recover which restores his Hit Points by half of his max Hit Points. Ice, Ground, Psychic, and Dragon-type Pokémon are his weaknesses. 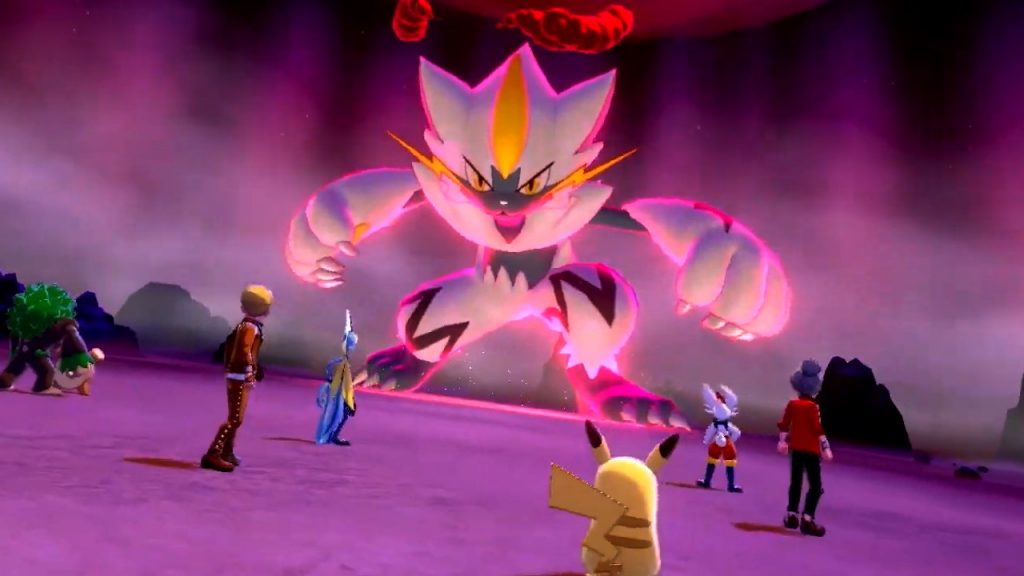 Next on the team is the Electric-type Zeraora. Zeraora is genderless and has the Pokémon ability of Volt Absorb. Volt Absorb allows it to be healed if it is hit with an Electric-type move. It is holding a Shuca Berry which will lessen the damage taken from supereffective Ground-type moves. Which will prove extremely useful. Remember to try and be fast with the move Fake Out to gain an advantage. Zeraora’s Speed and Attack are 2 of the important stats we have.

The moves that we have are Plasma Fists, Close Combat, Fake Out, and Protect. Plasma Fists is a really good attack that changes Normal-type moves to Electric-type moves. Close Combat is a super strong fighting move that lowers the user’s Defense and Special Defense stats. Fake Out is a normal move that can benefit from the Plasma Fists. Fake Out attacks first and causes a flinch. Only works the first turn each time the user enters the battle. Protect, as always, protects us from attacks. Ground types are strong against our Zeraora, so keep that in mind. 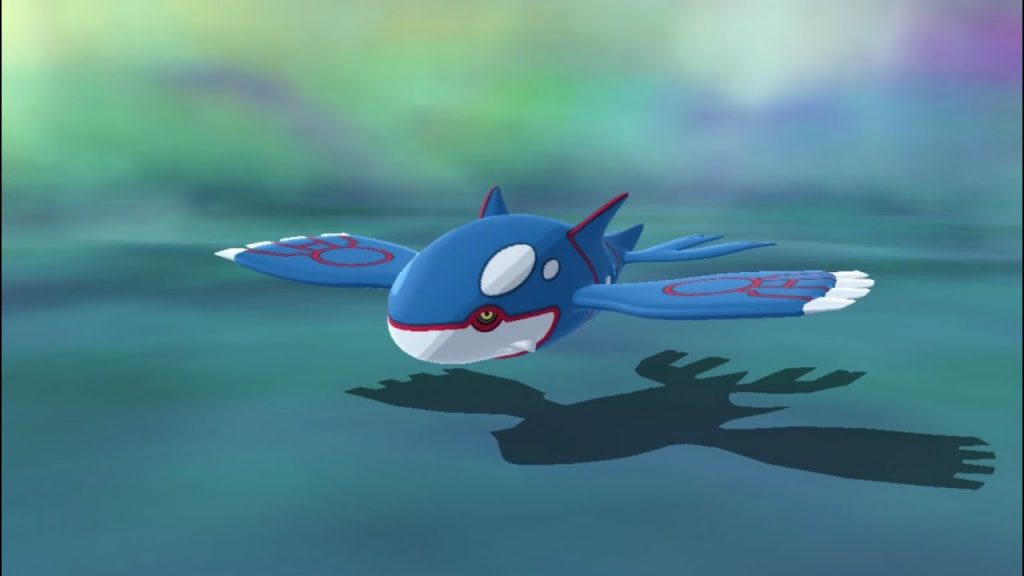 A third Pokémon we can lead with if we want to change it up is the Water-type Kyogre. Kyogre is genderless and has the ability it’s known for Drizzle. Drizzle causes it to rain when the Pokémon enters the battlefield. Kyogre is holding the item known as Mystic Water. Mystic Water boosts the power of Water-type Pokémon moves. Kyogre’s best stat by far is his Special Attack but also has good Hit Points and Special Defense.

Water Spout, Ice Beam, Origin Pulse, and Protect are the moves we have for this Kyogre. Water Spout is super strong, but its power is lower the more the user’s Hit Points are. Ice Beam is a good move that may also leave the target frozen. Origin Pulse is a strong attack that has slightly lower accuracy. Then we have Protect which is a good support move that will protect from most incoming attacks but may fail if used in succession. Kyogre is weak to Electric and Grass-type Pokémon. 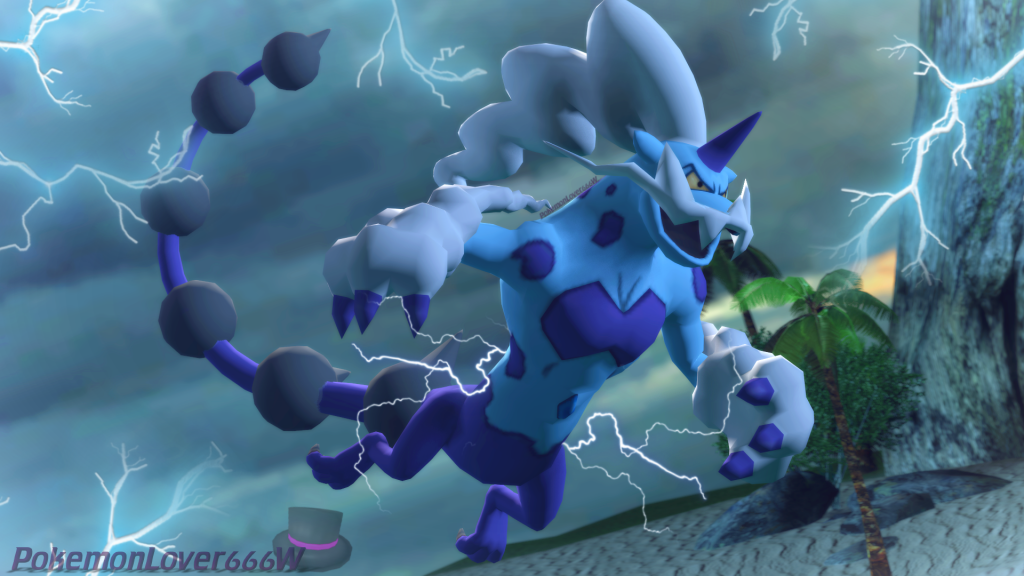 The final Pokémon for our team is the Electric/Flying-type Thundurus. Thundurus is a male with the ability of Defiant. Defiant will boost the Pokémon’s Attack stat sharply when its stats are lowered. He is wearing an Assault Vest that raises his Special Defense but prevents the use of status moves. This is mostly the typical Thundurus build. Speed and Attack are his 2 highest stats.

Wild Charge, Fly, Crunch, and Brick Break are the moves this Pokémon knows. Wild Charge is a good Electric attack that also damages the user a little. Fly is a 2 turn move that allows the user to fly into the air and dodge most attacks for a turn. Then on the following turn strike the target. Crunch is a good attack that may lower the target’s Defense stat. Then we got Brick Break which is a Fighting-type attack that can break barriers such as Light Screen and Reflect. This can be very crucial in some situations. He is weak to Ice and Rock-type Pokémon moves.

Like I said in the opening, I wanted to have a fun Baby Doubles Battle Team for you but I couldn’t make it happen. Even though that didn’t happen we stumbled across this awesome Mythical Genesect team thanks to BGaming. I like this team cause it has multiple strategies we can do and isn’t just locked into one. We can adapt based on what the opponent is doing and use that to our advantage. Bugs will be great with all the Legendaries/Mythical Pokémon people will be using. This means a lot of Special Attacking Pokémon. The next time you see a battle team we will be on Pokémon Scarlet and Violet!