We are back once again bringing you another Pokémon doubles battle team. This time we are heading back to a team I saw last year. I wanted to show off a Butterfree team even though this team seems a little outdated, it is still fun. So, while I look for a fun baby Pokémon team to write about let’s jump into this interesting Buterfree team. Shout out to the YouTube channel Jeans where I saw this video about this team that was provided to him by a follower! 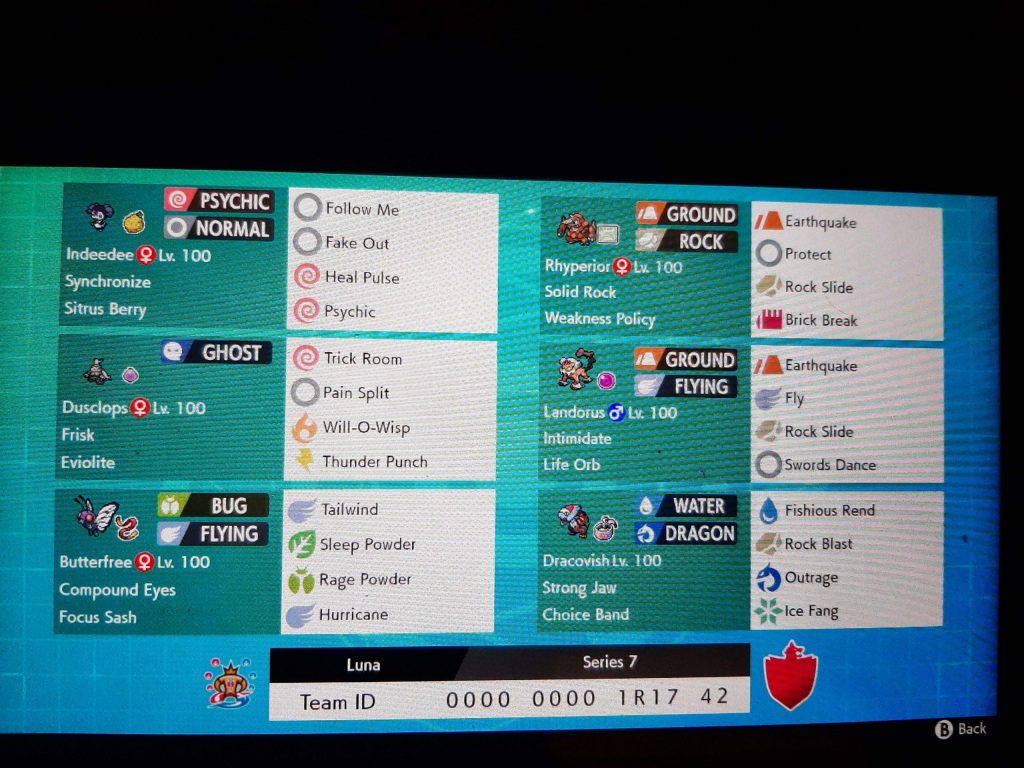 Regarding this Butterfree team, we have a few different things we can do depending on the situation. We have Indeedee which can be a great support Pokémon. We can combine Rhyperior which is a monster with a potential Dusclops Trick Room. If Rhyperior’s Weakness Policy activates, he will be putting out a ton of damage. Butterfree which is my favorite Pokémon on the team can set up a great Tailwind as well as put almost any Pokémon to sleep.

Life Orb Landorous is super strong and is a big damage dealer for us. If we can get a Swords Dance going for Landorous we have the potential to one-hit some Pokémon. We also have another good damage dealer in Dracovish. Dynamazing specific Pokémon depending on the situation can provide crucial benefits to lead us to victory. 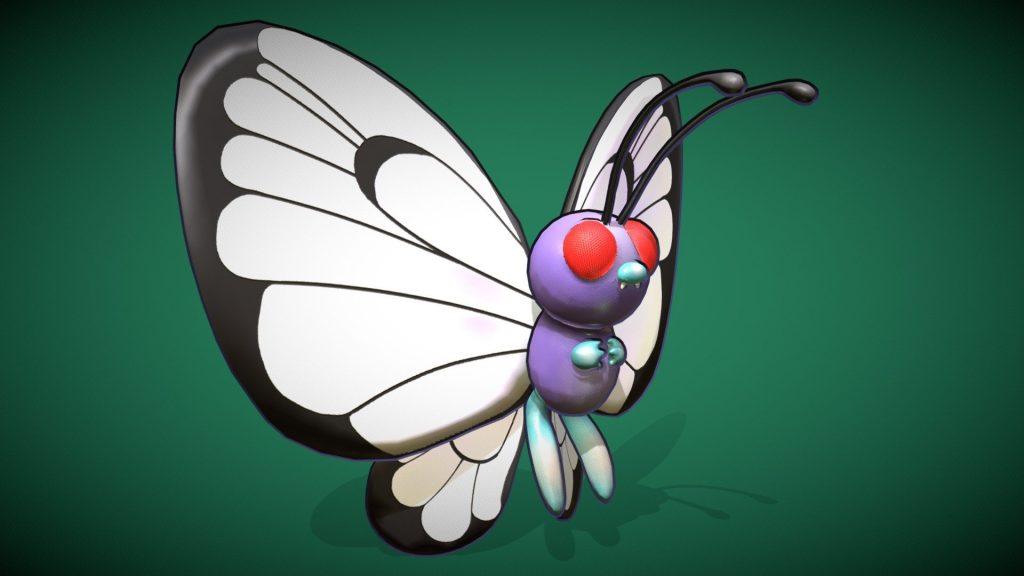 Let’s kick it off with my favorite Pokémon of the team, it’s none other than our Bug/Flying-type Butterfree. Butterfree can be useful in a few different ways with its support moves as well as its 1 attack move. Butterfree is a female that has the Compound Eyes ability which boosts the Pokémon’s accuracy. She is holding a Focus Sash which will allow it the potential to survive a one-hit-ko move, afterwards the item disappears. Which is very useful when setting up for certain things whether it is putting Pokémon to sleep or setting up Tailwind. Important stats are Hit Points and Speed.

The moves Butterfree knows are Tailwind, Sleep Powder, Rage Powder, and Hurricane. Tailwind is a great move that will increase the user’s speed as well as their allies. Sleep Powder is exactly what you think, which is a move that can put Pokémon to sleep. Rage Powder is a Bug-type move that causes opposing Pokémon to aim only at the user. Our final move is a powerful flying-type move called Hurricane. Usually, accuracy isn’t super great, but with Butterfree’s ability Compound Eyes, our accuracy is increased. She is weak to Fire, Electric, Ice, and Flying Pokémon moves, but super weak to Rock-type moves. 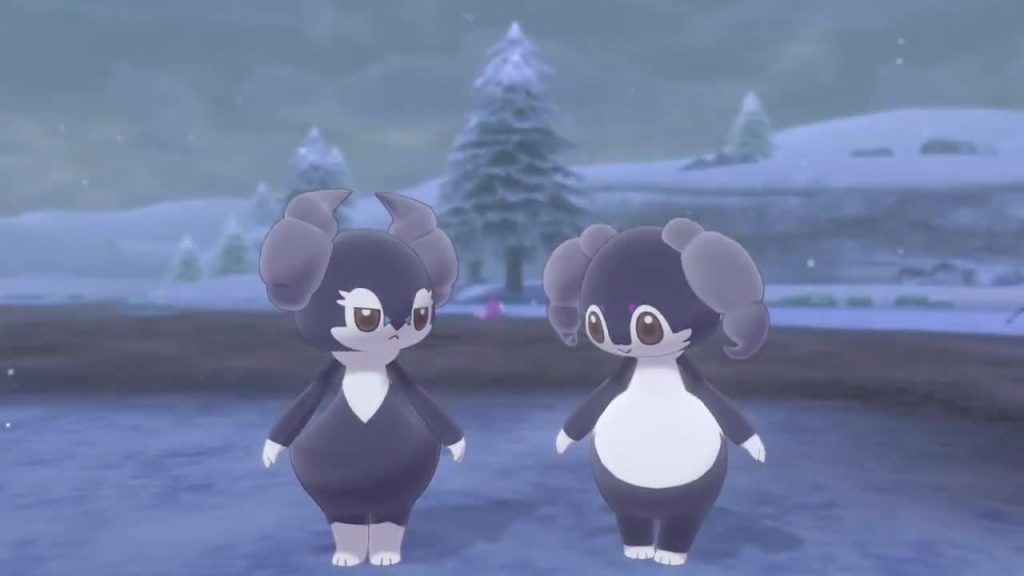 Second up on our team is another support-style Pokémon, which is the Psychic/Normal-type Indeedee. We went with a female Indeedee for our team which is the norm for a team using her in doubles. She has the ability Synchronize which causes the opposing Pokémon to receive the same status condition that gets inflicted on her. For example, if she gets poisoned or burned among other things so will the opposing Pokémon. The item held is a Sitrus Berry which can restore a small number of Hit Points during battle. The best stats for her are Hit Points and Special Defense.

Indeedee knows the Pokémon moves Follow Me, Fake Out, Heal Pulse, and Psychic. Follow Me is a support move that makes all targets aim at her. Fake Out is an attacking move that hits first and may cause the foe to flinch. Only works the first turn each time the user enters the battle. Heal Pulse is a healing move that heals the target’s Hit Points. Lastly, Psychic is an attacking move that may lower the target’s Special Defense stat. She is weak to Bug and Dark-type Pokémon moves. 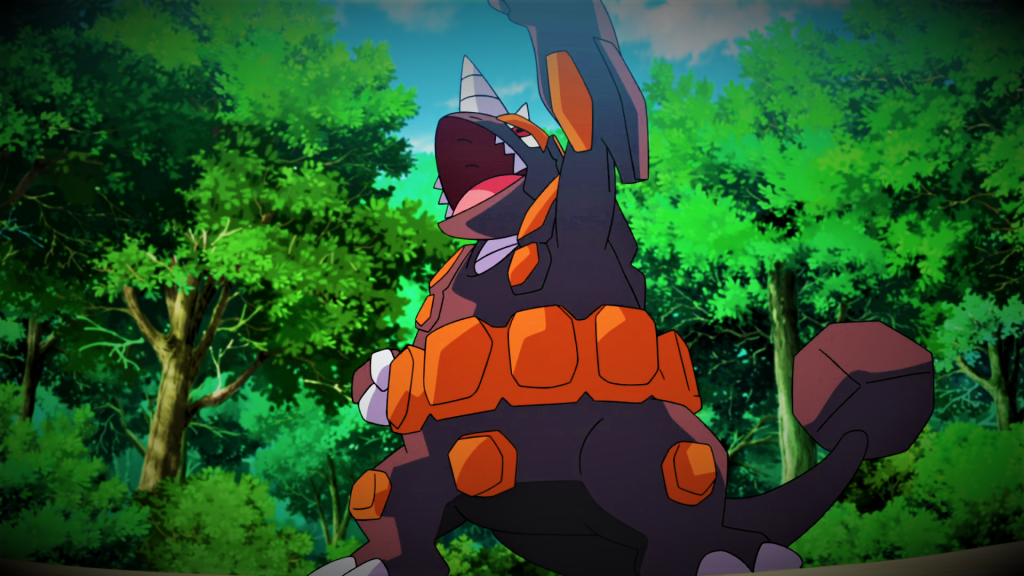 Third up is a monster of a Pokémon in the Ground/Rock-type, Rhyperior. We have a female Rhyperior that is very strong and a tank. Rhyperior has the Pokémon ability of Solid Rock which reduced the power of supereffective attacks she takes. She is also holding a Weakness Policy which will sharply increase our Attack and Special Attack if hit by a move she is weak to. So that ability will prove useful here and helps out the Weakness policy. Our best stats are Hit Points, Attack, and Defense.

Earthquake, Protect, Rock Slide, and Brick Break are the Pokémon moves Rhyperior has. Earthquake is a strong move that hits every Pokémon around it unless they are immune. Protect is a move that protects itself from almost all attacks but has a chance of failing if used in succession. Rock Slide is an attacking move that might cause the opposing Pokémon to flinch. Then lastly Brick Break is a fighting-type move that not only deals damage but can break through barriers such as Light Screens and Reflect. Rhyperior is weak against Ice, Fighting, Ground, and Steel-type moves. She is super weak to Water and Grass-type moves. 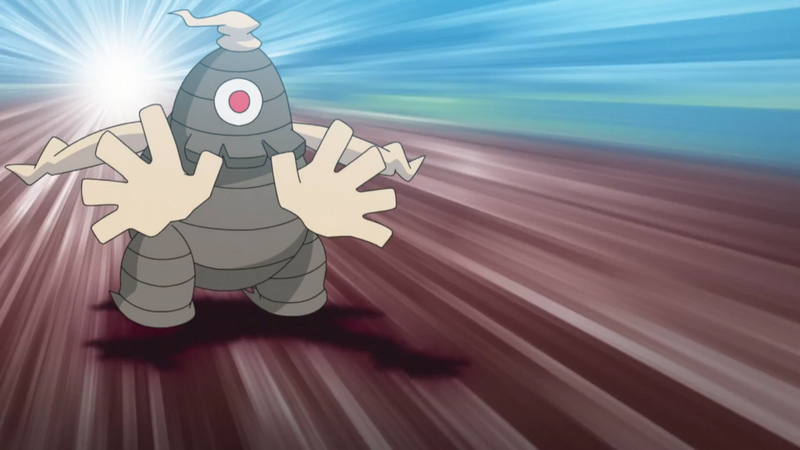 The fourth Pokémon on our team is the Ghost-type Dusclops. Dusclops is a female Pokémon with the Frisk ability which when it enters battle can check what opposing Pokémon’s held items are. She is holding an Eviolite which if it’s held by a Pokémon that can still evolve, raises both Defense and Special Defense. Dusclops’ Trick Room combined with Rhyperior’s slow speed and her slow speed will help tremendously. This is especially useful when their speed stats get swapped with opposing Pokémon. Her best stats are Defense and Special Defense.

Pokémon moves Dusclops knows are Trick Room, Pain Split, Will-O-Wisp, and Thunder Punch. Trick Room allows slower Pokémon to move first for five turns. Pain Split is a move that adds its Hit Points to the target’s Hit Points, then they equally share the combined Hit Points. Will-O-Wisp is a move that inflicts a burn on the target. Thunder Punch is an attacking move that maybe even leave the target with paralysis. When it comes to the Dusclops she is weak to Ghost and Dark-type Pokémon moves. 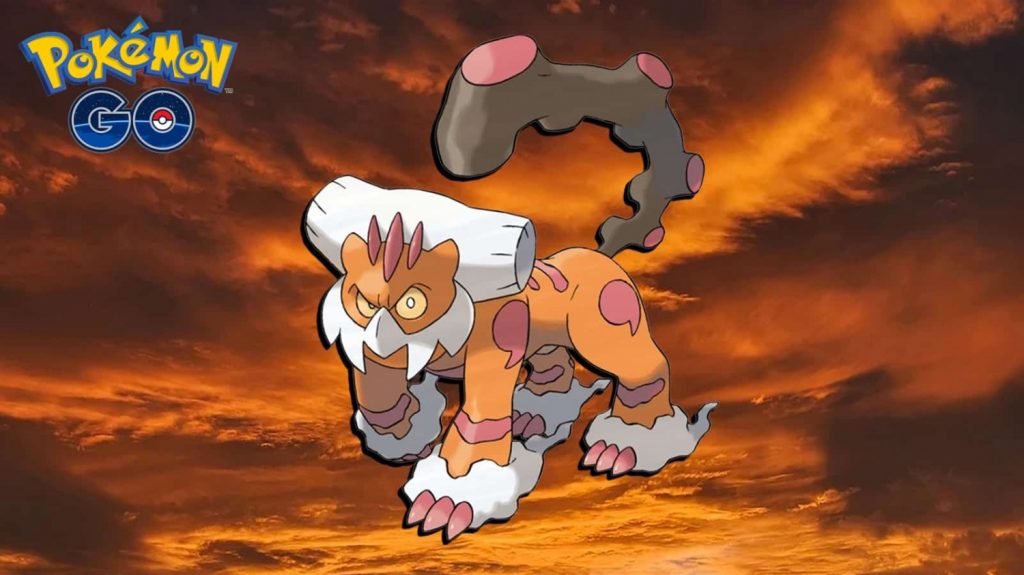 One of our best attackers for the team is the Ground/Flying type Pokémon Landorus. Landorus is a male with the Intimidate ability which lowers opposing Pokémon’s attack stat when he enters the battlefield. He is holding the Life Orb which boosts the power of moves at the cost of some HP on each hit. Dynamaxing Landorus has proven useful quite a few times for achieving victory, but you can Dynamax others as well. Landorus’s best stats are Attack, Hit Points, and Speed.

Our Pokémon moves for Landorus are Earthquake, Fly, Rock Slide, and Swords Dance. Earthquake as mentioned above strikes every Pokémon around him unless immune. Fly is a move that allows him to Fly up in the air and dodge attacks for a turn, then he strikes the target on the following turn. Rock Slide is a Rock-type move that may cause the opposing Pokémon to flinch. Swords Dance is a support move that sharply raises the user’s Attack stat. This move can boost our Lanorus drastically. He is weak against Water-type moves but super weak against Ice-type moves. 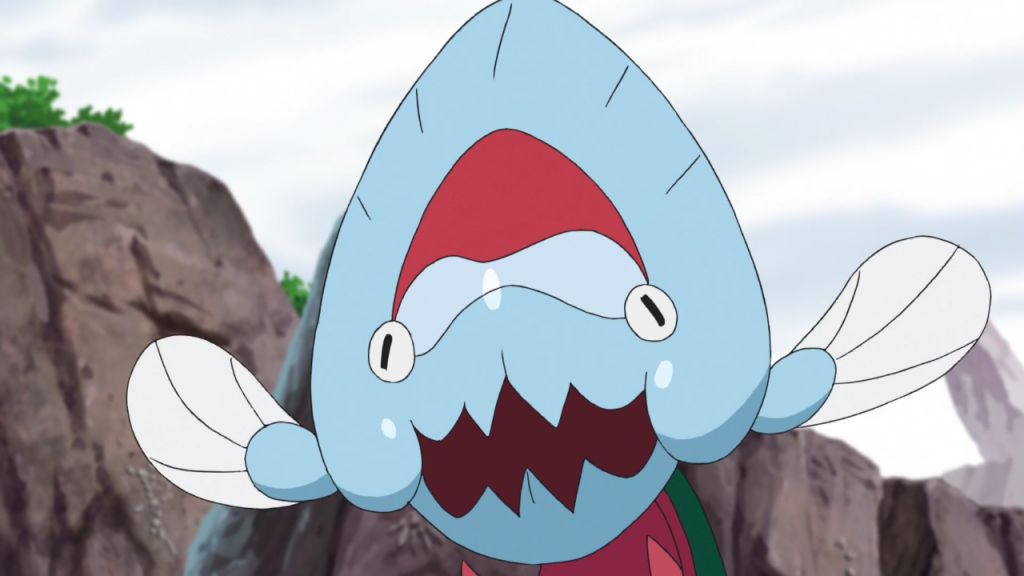 Finally, the last Pokémon on our team is none other than the Water/Dragon-type Dracovish. Dracovishh is a fossilized Pokémon so it’s genderless and has the ability of Strong Jaw. This ability boosts the power of its biting moves. Choice Scarf is the item Dracovish is holding which boosts Attack but only allows the use of one move. We have some good attacking moves so the use of only one move won’t bother us at all. Our best stats are Hit Points and Attack.

Dracovish knows the Pokémon moves Fishious Rend, Rock Blast, Outrage, and Ice Fang. Fishious Rend is an attacking move, if the user attacks before the target, the power is doubled. Rock Blast isn’t super strong but attacks 2-5 times in a row by throwing rocks at the target. Outrage is a strong Dragon-type move that attacks for 2 or 3 turns, then leaves the user confused. Ice Fang is a good attack combined with our ability is way more strong. This move can leave the target flinched or frozen. The Pokémon moves that Dracovish is weak to are Dragon and Fairy-type moves.

I am a big fan of unique strategies and seeing that Butterfree isn’t commonly used right now. That’s why this particular team piqued my interest. Setting up Tailwind and out-speeding my opponents to lay in the damage was great. Butterfree’s Sleep Powder gave me time to set up Trick Rooms as well as some other combos. Rhyperior, Landorus, and Dracovish are just massive damage dealers and proved very useful to attain victory. If you have any Pokémon team rental codes you want me to write about comment below or message me on Twitter.