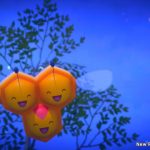 2021 already seems like a great year for Pokemon fans. The long-awaited Diamond and Pearl remakes were announced along with a Breath of the Wild-like new game. Last year, however, fans got the most unexpectedly exciting announcement: a New Pokemon Snap game.

Almost a year later, New Pokemon Snap is out, and it is a heaping dose of comfort food gaming. Fans of the original spin-off will be more than thrilled with this sequel, regardless of obvious areas of improvement.

Writer’s Note: This game was played on the Nintendo Switch Lite for this review. 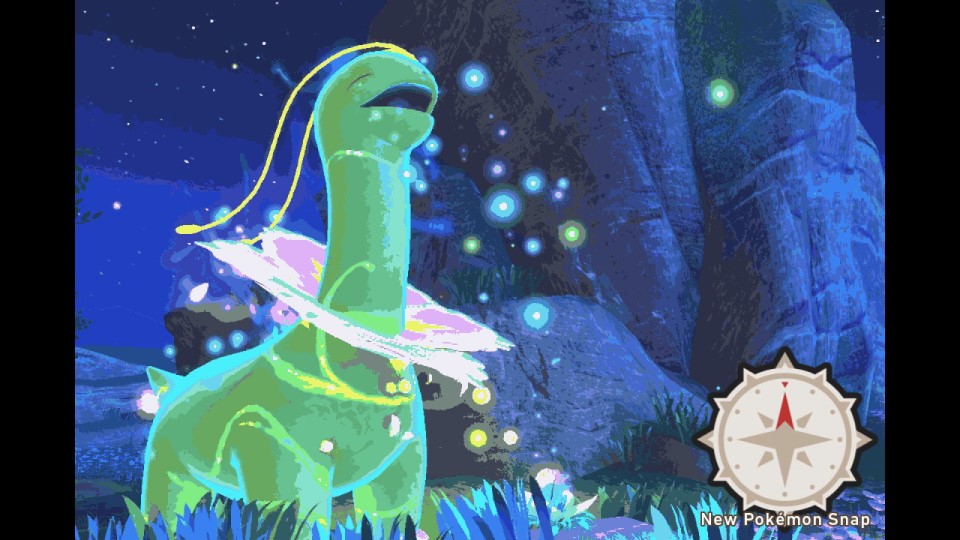 Players can tweak their photos with shaders, stickers, etc.

Players control a research assistant for Professor Mirror in the Lental Region. He is researching the Illumina effect at the Laboratory of Ecology and Natural Sciences. Illumina-affected Pokemon glow and some naturally carry this effect. Your task is to document these and other Pokemon with your camera.

However, you and the Professor are not the only ones here. You have two other assistants, Rita and Phil, who join your team. Most notably, Todd, the protagonist from the original Pokemon Snap, also helps you with your research.

Welcome to the Lental Region (and Brace for Lens Puns)

There are five main islands in New Pokemon Snap, with more than a dozen combined levels. Each level puts the player in an all-terrain vehicle called the Neo-One to explore. The Neo-One charts a generally predetermined course so players can focus on getting the best photos

While some players might find a strict path frustrating, having a predetermined path and time limit ensured I would not miss certain photo opportunities. It felt both natural and realistic to see these creatures in the habitat undisturbed…until I hit them with food that is.

Like many Pokemon games, the first area features calm, grassy fields and ponds. Other locations put you in the ocean, volcanos, the arctic, and more. This variety leads to a litany of region-specific Pokemon, making these levels feel alive. More importantly, these areas feel like Pokemon communities Each level has scripted events that change as you level up. It provides a nice sense of progression with the Pokemon in each area as you and they grow more comfortable with each other.

One of New Pokemon Snap‘s strengths is the Pokemon franchise’s 25-year history. 25 years of Pokemon means nearly 900 Pokemon species to show off. This game shows a very balanced selection of Pokemon by generation. No matter the original 151’s enduring popularity, they play nowhere near the major role they regularly have in past games. 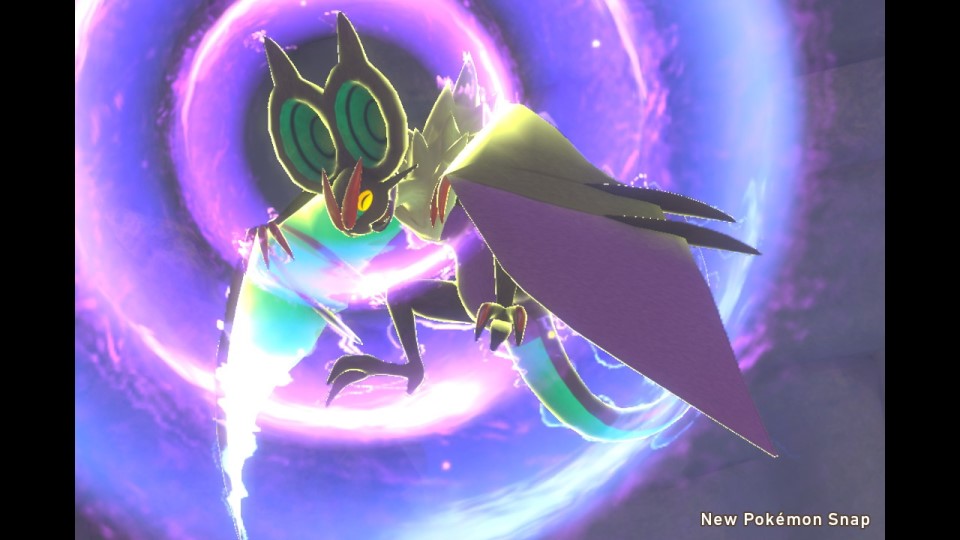 As of the end of its first month, players are still finding new photo opportunities.

Get Your Shutters Ready in New Pokemon Snap

New Pokemon Snap brings back the original photography that hooked so many 90’s kids. Players photograph Pokemon and can use tools like food, music, and more to create better photo opportunities just like before. That core gameplay loop did not change, we just have seven other generations worth of Pokemon to photograph.

Somehow, this photography-based game includes boss fights. Illumina Pokemon are Pokemon naturally imbued with the Illumina effect. They have their own levels and must be photographed when the effect activates. Getting these photos can be tricky, and sometimes frustrating. The Illumina Pokemon’s evasiveness and level-specific obstacles make these levels a challenge. However, they wouldn’t be boss levels if they weren’t a challenge.

Once a player completes a course, they pick one photo per species to show off. These photos are scored and ranked by star tiers (bronze, silver, gold, and diamond) in terms of quality. Photos are scored on the Pokemon’s pose, their placement and size in the shot, their direction towards the camera in the shot, the quantity of Pokemon in the shot, and sometimes even the background of their shot.

The different photo opportunities, however, are ranked by the total number of stars. For example, a Pokemon just walking along is a one-star opportunity, but a Pokemon eating is two. Even rarer situations, like direct interactions with the environment or other Pokemon, get three or four stars.

As you and Professor Mirror review your final selections, you pick which photos you want to add to your Photodex. The Photodex has a page and four photo spots for each Pokemon. Each photo star level has a spot, and you get experience for adding new photos to these spots.

One “Wail”-Sized Exception Aside, New Pokemon Snap is Pretty

This is a beautiful game to play. Thanks, in part, to the generally acceptable performance on Nintendo Switch consoles, biomes come alive. Water glistens and stars shines in the night as visual effects add to the spectacle. Colors pop and glow, creating an almost mystical aura around the Pokemon, especially the Illumina Pokemon.

There is one, massive exception.

One of the best moments from the reveal trailer showed, a Wailord breaches the surface of the water. That water blimp always wrecks the framerate. Where most of the game performs seamlessly, Wailord knocks hacksaws into the framerate for a very choppy visual.

Overall, this is a pretty addition to the Switch library, but it has a giant exception that needs to be called out.

Progression is One Step Forward, One Step Back

Speaking of progression, that is New Pokemon Snap’s biggest update. Each level has its own experience track. Every photo you pick to show off adds to that level’s progression track, and when you level up, you see more Pokemon species and more Pokemon opportunities. The Pichu and Grookey that run off in the first level eventually greet you as you increase that level.

This is the compelling force behind revisiting these levels, even when you have other stuff to do to progress. So instead of continuing your research on the beach or the ocean seafloor, you can reasonably return to the jungle for more photo ops.

Yet, that is not to call the progression perfect. First, picking one photo per species does help narrow down your choices, but also hamstrings progress. Each photo score adds to the total experience you earn for that level, but having multiple great photos of one species keeps you from putting all of your best photos on display.

Furthermore, the photos you took mean nothing if you don’t add them to your Photodex. When you do replace an existing photo, its score is not fully converted to experience. Instead, the difference between the new and old scores is what you earn. So when you are trying to max each level’s experience, the game turns into a grind.

There’s no shame in having time commitments to 100% a game, but those commitments become unnecessary the more you need to repeat the same thing over and over again. 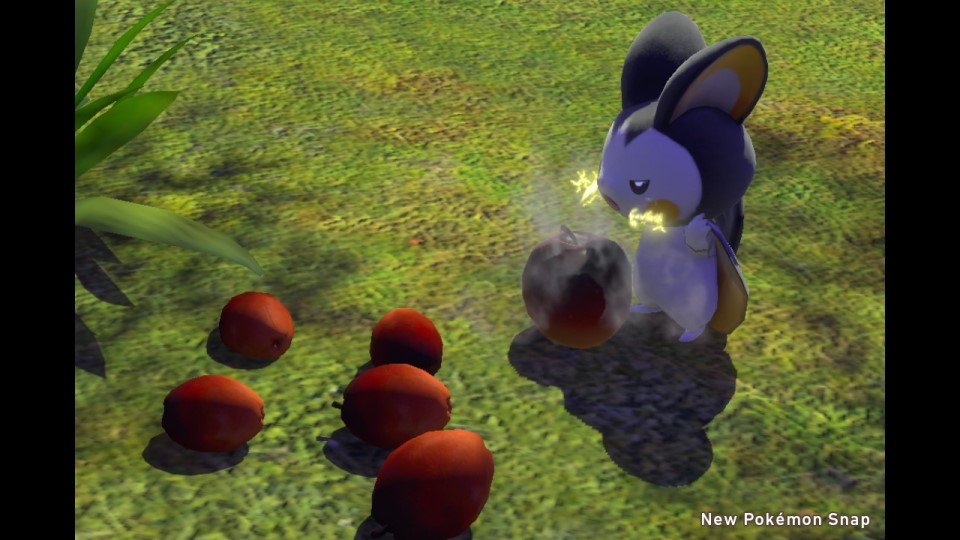 The original photo was platinum, but thanks to editing I got it exactly how I wanted for everyone to see.

Sharing and Editing your Pictures is Annoyingly Frustrating

For a game that wants the player to share their work, New Pokemon Snap makes it hard sometimes. On one hand, the game has its own network for players to share their photos and edits with. You can even have Professor Mirror pick his favorites to automatically upload online.

However, the process gets disjointed. The traditional “photo mode” many major games use today is only available after debriefing your past excursion. You cannot use it once you have saved a photo to your album. Once you do, you can only use another photo editor with different features. This separation leaves players asking why they stay separate. If players want to edit pictures, they should get to use all the tools the game offers at the same time.

Not Perfect, but Worth it

New Pokemon Snap is not a perfect game. That said, it is exactly what fans of the original Pokemon Snap wanted. Fans got over a dozen maps with new experience systems and hundreds of Pokemon released after the original. These maps also grow as you level up, keeping the players coming back for more and more photo excursions. Pokemon shutterbugs should be chomping at the lens for this game.