Here we are once again bringing you all another Pokémon battle team. Still working on a couple of special teams to bring to you all in the future. This month though we are going back to double battles to bring you a fun Pokémon team called Rainy Days. Many people in the world enjoy Rainy Days, so I hope you enjoy this Pokémon team made by Gene Cole. 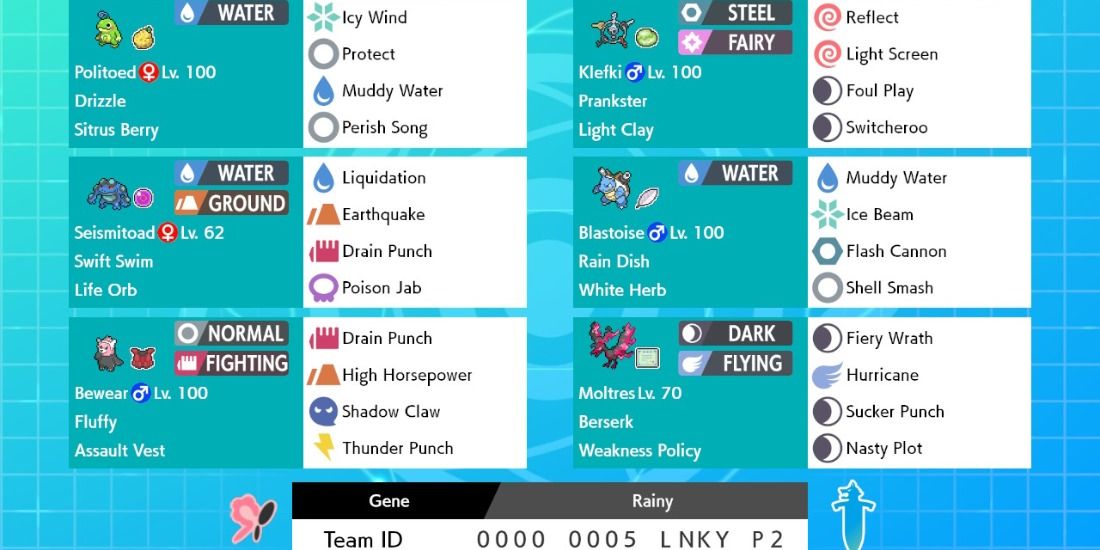 The Pokémon team called Rainy Days utilizes the Rainy battlefield to boost a myriad of effects. Rain teams tend to be more common than some other teams thanks to a surplus of different effects that can be utilized. Politoed and Klefki can be really good lead Pokémon for the team since you want to set up the Rain with Politoed’s Drizzle. All the while Klefki can set up some protections with Reflect and Light Screen or provide other avenues of support.

All our other Pokémon will worry our opponents cause they benefit from the Rain weather on the battlefield. You get to benefit from Moltres’s Hurricane and Seismitoad’s Swift Swim ability. There are also the benefits of the defensive boost the Bewear’s special Fire-type weakness since that gets eliminated. Then of course we got our boy Blastoise whose Rain Dish ability allows him to heal himself when it’s raining. No matter who we pick we have the ability to smack our opponents around. 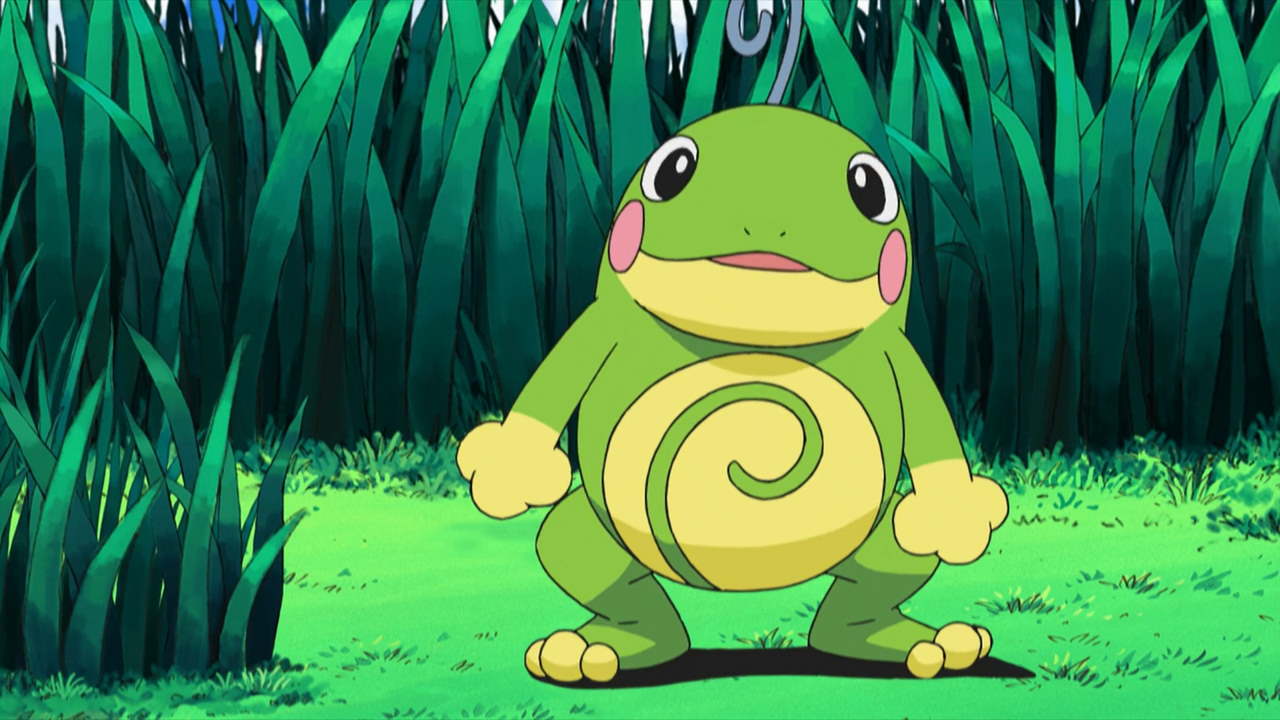 First starting off this doubles team is none other than the Water-type Pokémon Politoed. For this group, Politoed is one of the two Pokémon we want to lead with to set up the battlefield. We went with a female Politoed that has the Drizzle ability which causes it to rain when she enters the fight. Probably the most important ability for the team, because we need it raining. She is holding a Sitrus Berry which can heal the Pokémon for a small amount during the battle. Important stats for her are Hit Points and Defense.

The Pokémon moves Politoed has are Icy Wind, Protect, Muddy Water, and Perish Song. Icy Wind is an average attack that lowers the opposing Pokémon’s Speed stat. Protect as you know from all these team articles is a move that protects from almost all attacks. If used multiple times in a row it has a chance to fail. Muddy Water is an above-average attack that has a chance to lower opposing Pokémon accuracy. Perish Song causes any Pokémon that hears it to faint in 3 turns unless switched out of battle. Politoed is weak to Electric and Grass-type Pokémon.

The second lead Pokémon we have is the Steel/Fairy-type Klefki. Klefki is a male with the Prankster ability which gives priority to a status move. Our Klefki is holding the Light Clay which makes moves like Light Screen and Reflect last longer. We can utilize some great support strategies here with this Pokémon’s list of great moves. Klefki helps set up the beginning of the fight for us. Our primary stats here are Hit Points, Defense, and Special Defense.

The moves this Pokémon knows are Reflect, Light Screen, Foul Play, and Switcheroo. Reflect is a support move that reduces damage from physical attacks for 5 turns. Light Screen is another support move that reduces damage from special attacks for 5 turns. Both of those get boosted by the Light Clay. Foul Play is a move that deals more damage the higher the opposing Pokémon’s Attack stat is. The last move is Switcheroo which allows Klefki to switch held items with a target. Players can pull off some crazy stuff with that. Kelfki is weak against Fire and Ground-type Pokémon. 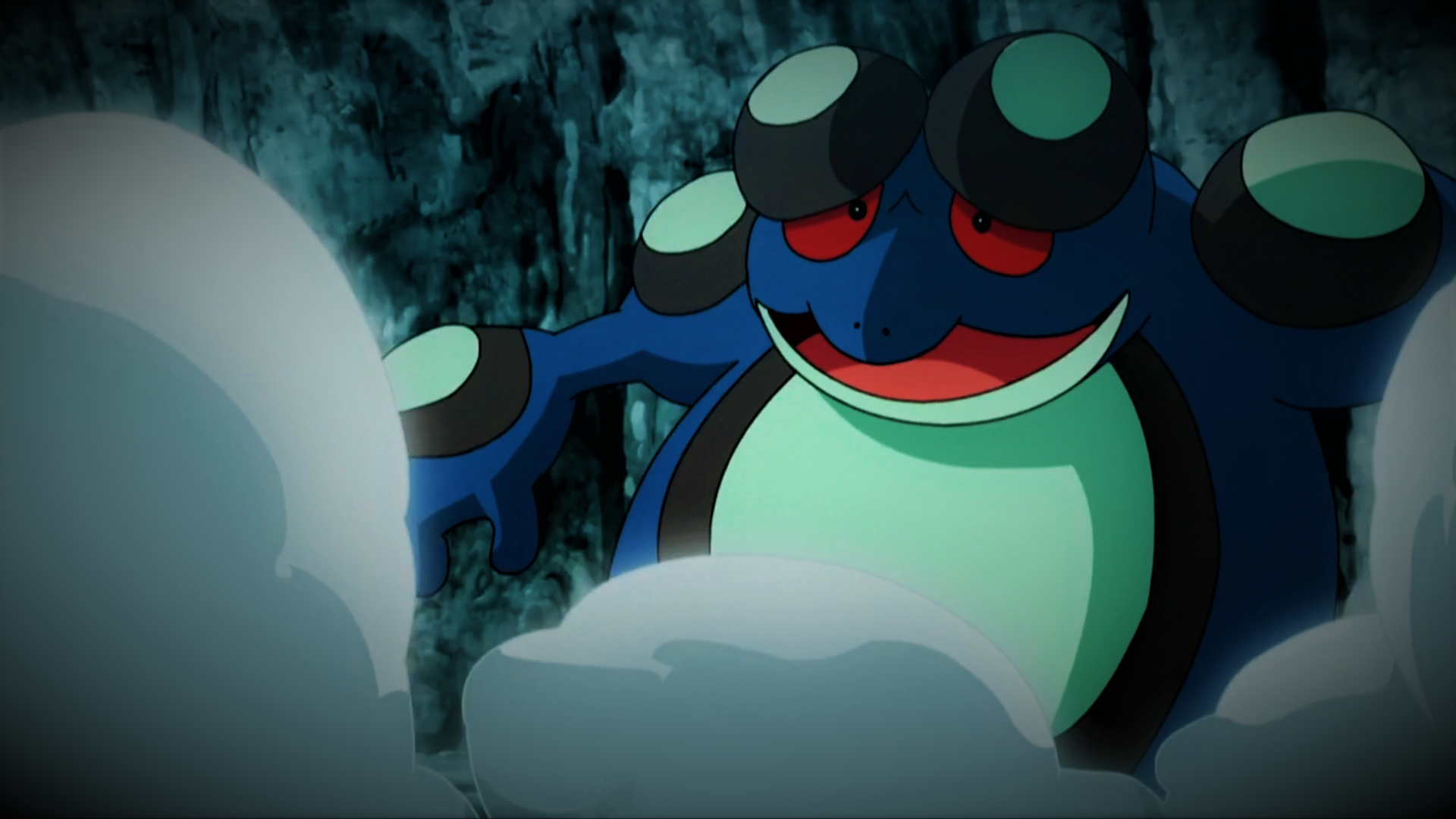 Next up on our team is one I like a lot is the Water/Ground-type Seismitoad. Here we have Seismitoad that is a female with the Swift Swim ability. Swift Swim raises her Speed stat in the rain. See what we mean when we say we want it to be raining. This Pokémon is holding the Life Orb which boosts the power of moves but costs us some Hit Points each hit. Many of the teams I write about will use the Life Orb item because it can help a lot. Seismitoad’s primary stats are Hit Points, Attack, and Speed.

Seismitoad’s moves should include Liquidation, Earthquake, Drain Punch, and Poison Jab. Liquidation is an attack move that may lower the target’s Defense stat. Earthquake is a powerful move that hits every Pokémon around the user unless they have the levitate ability or are immune. Drain Punch is an attack move that restores your Hit Points by half the damage the target took. Poison Jab is a good attack that may also poison the target. Overall a good variety of attacks for this Pokémon. Seismitoad is weak to super weak against Grass-type Pokémon. 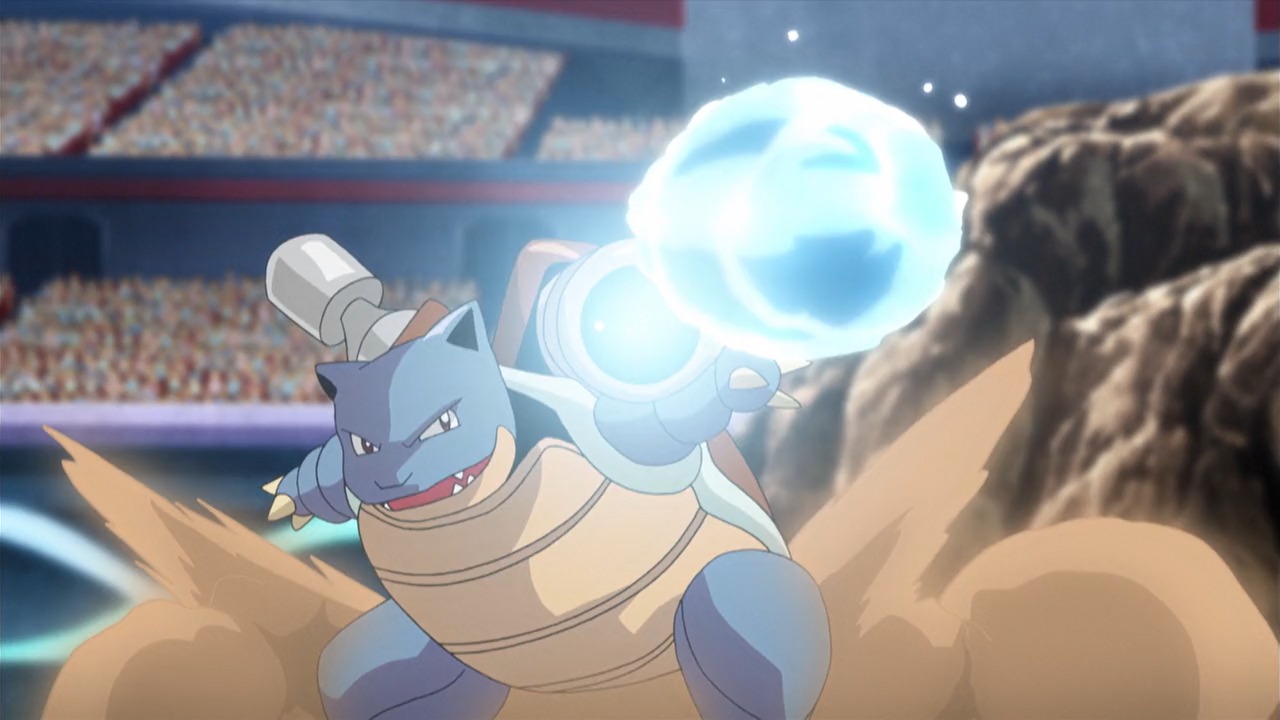 Now we have a very popular Pokémon and that is none other than the Water-type Blastoise. We have a male Blastoise here that is holding the White Herb which will restore any lowered stat in battle but only can be used once. Blastoise has the Rain Dish ability which will regain some of its Hit Points while it’s raining. I definitely Dynamax him a decent amount when I need to start dishing out the damage. The primary stats for him are Special Attack and Hit Points.

The moves Blastoise knows are Muddy Water, Ice Beam, Flash Cannon, and Shell Smash. Muddy Water as you know from above is an attack that might lower the foe’s accuracy. Ice Beam is a good Ice attack that maybe leave the target frozen. Flash Cannon is a good Steel-type attack that may lower the target’s Special Defense stat. Blastoise’s last move is Shell Smash which lowers his Defense and Special Defense stat but increases Attack, Special Attack, and Speed stats. This Pokémon is weak against Electric and Grass-type Pokémon. 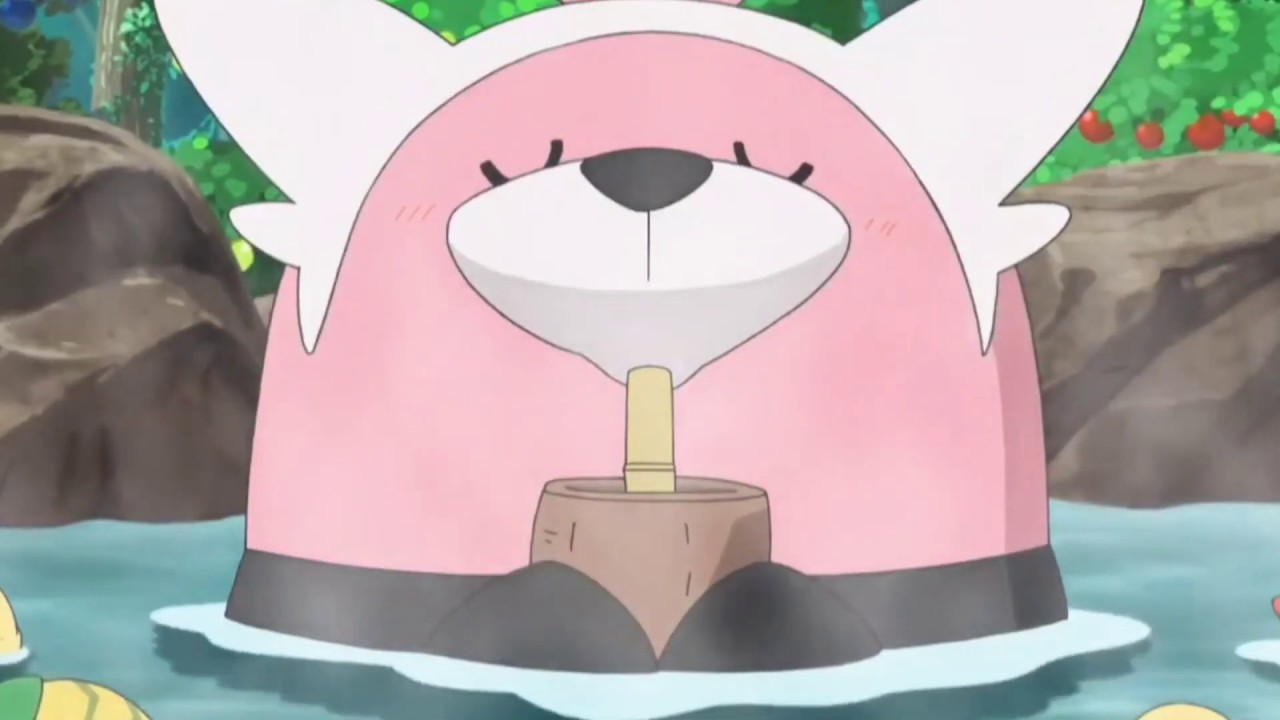 Second to last for our team is an interesting Pokémon in the Normal/Fighting-type Bewear. Our Bewear is a male Pokémon that has the Fluffy ability which halves the damage from moves that make direct contact but double that of Fire-type moves. He is holding an Assault Vest which raises Special Defense but prevents the use of status moves. The Rain on the battlefield helps with the special Fire weakness as we mentioned above. Bewear’s primary stats are Attack and Hit Points.

Moves that Bewear knows are Drain Punch, High Horsepower, Shadow Claw, and Thunder Punch. Drain Punch is an attack that restores our Hit Points by half the damage we deal to the target. High Horsepower is a decent Ground-type attacking move with good accuracy. Shadow Claw is an attacking move that allows critical hits to land more easily. Thunder Punch is a good electric attack that has a chance to leave the target with paralysis. Bewear’s typing weaknesses are Fighting, Flying, Psychic, and Fairy-type Pokémon. 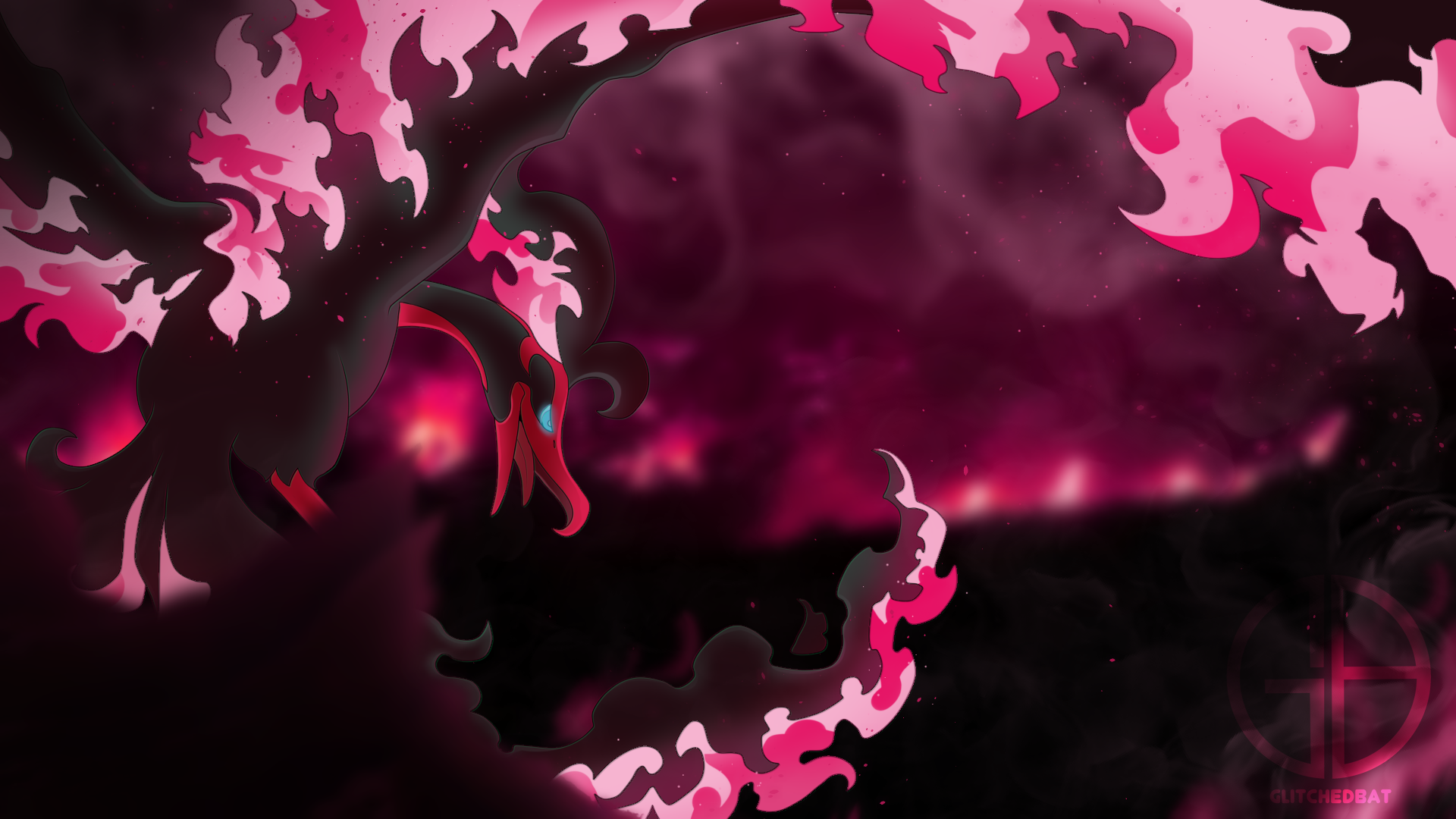 The last member on the team is a Galarian Moltres which is a Dark/Flying-type Pokémon. The original typing of Moltres was Fire and Flying typing so that is why the Galarian form of Moltres is really cool because its types are different. Moltres is a legend and they typically don’t have a gender, and their ability is Berserk. Moltres’s Special Attack will be boosted if it takes damage that causes its HP to be half or less. Our Moltres is holding a Weakness Policy in which if it’s hit with an attack it’s weak to, the Attack and Special Attack will sharply increase. Primary stats for this Pokémon are Special Attack, Speed, and Special Defense.

The moves Moltres knows are Fiery Wrath, Hurricane, Sucker Punch, and Nasty Plot. Fiery Wrath is an attacking move that might cause the opposing Pokémon to flinch. Hurricane is a very strong move with lower accuracy that may also confuse the target. Sucker Punch allows the user to attack first, but will fail if the target is not readying an attack. Then our last move is Nasty Plot which sharply raises Moltres’s Special Attack. Galarian Moltres is weak to Electric, Ice, Rock, and Fairy-type Pokémon.

I don’t see many situations where I didn’t lead with Politoed and Klefki to set up the battlefield. If your strategy gets interrupted or the field changes you can always bring Politoed back out for its Drizzle ability to take effect. I am also a big fan of the special form Pokémon like Moltres for this team or Galarian Weezing from one of my articles. They look cool and seem super unique, especially with the type changes. This is a team I will continue to play for a while until new games release at least. Next month we will be back with another battle team setup, so if there is a team you wanna see and have a rental code for let me know in the comments or on Twitter.