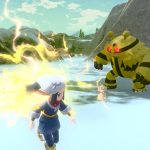 You are reading
Can Pokémon Legends: Arceus Solidify A New Series?

Pokémon Legends: Arceus takes Game Freak’s formulaic approach to Pokémon games, ties it to Team Rocket, and sends it blasting-off for the stars. What’s left behind? An action RPG in uniquely-tailored Pokémon clothes that fit surprisingly well but seem dulled by the platform used to present them. Despite the game’s poor performance and bland graphics, it is selling incredibly well. Which begs the question: how does Nintendo keep getting away with this?

Well, Legends: Arceus features deeper, more satisfying gameplay and a much darker story. But can gameplay and story solidify a new series and overcome the lackluster power of the Switch? I think so, but allow me to explain.

WHAT IT DOES RIGHT

Pokémon Legends: Arceus caught me off guard with its darker tone. Instead of playing the role of a kid embarking on your Pokémon adventure, you’re in an uncanny land where people don’t trust you. The people of the Hisui region live in fear of Pokémon and strangers. The townsfolk treat the player as an outsider, judged for their strange clothing, and spoken down to by almost everyone. Met with a cold welcome and asked to prove their worth and earn their keep.

I found this to be a significant change of pace for the franchise. The same tired story Game Freak dusts off for each new game is essentially turned on its head. It’s almost as if they set out to do the exact opposite of everything they’ve traditionally done.

New mechanics make every aspect of the gameplay more compelling. Instead of simply catching Pokémon, completing the Pokédex, the game asks the player to perform tasks individually crafted for each Pokémon. Sometimes you must defeat a Pokémon with specific attacks or see a Pokémon use a particular move several times. There are plenty of different tasks and each asks the player to play differently. You complete Pokédex entries by completing ten of these tasks for a single Pokémon. I felt compelled to complete the Pokédex, which is a first since maybe Pokémon Yellow. This made me want to spend more time playing the game, instead of racing to the finish.

Even battling, a core tenant of the Pokémon franchise, has seen changes. Instead of the traditional turn-based system, there are opportunities to strategize and game the turn-based structure. Mastering moves grant access to Strong and Agile-style moves, opening more options during battle. A Strong-style move hits harder but sacrifices a turn in action. Agile-style moves hit softer but allow the Pokémon to follow up the attack with a second move. I felt like I couldn’t be on auto-pilot like I typically am during Pokémon games. I had to strategize and consider if I could one-hit KO the enemy Pokémon with a Strong-style attack. There is nothing worse than getting hit twice after failing to one-hit with a Strong-style move. Conversely, considering if two Agile attacks would have the power to eliminate the enemy had to be pondered.

Frenzied noble Pokémon replace gym battles. This introduces a new style of battling that diversifies the way the player engages in combat. The player must weaken the defenses of the frenzied noble before they can attack it. But even then, the fight isn’t over. These feel like proper boss fights and I felt they were the most challenging. I think the fluidity of the battles could use some work but I enjoyed them overall.

Party management options open up in a way that would break a traditional Pokémon game. But it suits Pokémon Legends: Arceus incredibly well! Move swapping allows a Pokémon to retain the knowledge of a move without having it in its active move pool. Gone are the days of sacrificing an attack for a set-up move like Thunder Wave.

The move Thunder Wave paralyzes a Pokémon and makes it easier to catch but does zero damage. If I don’t want Thunder Wave in my move pool, I can swap for it when I see a Pokémon I want to catch. Then switch the move back out once I catch the Pokémon I want. This feels less restrictive and more representative of what players envision being possible in an open-world Pokémon game.

Effort Levels are a Pokémon’s modifiers to their base statistics and can be boosted with Grits. Players can obtain Grits in several forms: Grit Dust, Grit Gravel, Grit Pebbles, and Grit Rocks. Each increases the Effort Level of a Pokémon’s stats to a certain degree. I found this to be a better system than the traditional methods. Effort Value training always seemed inaccessible as a casual player, but Pokémon Legends: Arceus tailored the feature to fit the game exceptionally well. Oddly enough, in a game with deeper mechanics, Game Freak has simplified the most complicated of the traditional features.

One small detail that doesn’t affect gameplay, but is a tip of the cap to the game’s visuals, is the evolution animations. These are hands-down the best evolution animations in any Pokémon game. Anything less than Pokémon Legends: Arceus’s animations will feel like a step-down moving forward. They’re more stylized and exciting to watch, especially compared to the silhouetted flip-book-style of the past games.

By no means is Legends: Arceus a perfect game, but it’s a testament that gameplay is king. As long as a game is fun to play, people will play it. In an age where fidelity and performance seem to be at the forefront of everyone’s mind, Legends: Arceus reminds us that fun gameplay matters more than anything. That being said, I don’t think I could recommend this game to everyone due to its shortcomings. I would be remiss if I didn’t touch on what the game could do better, so let’s dive in! 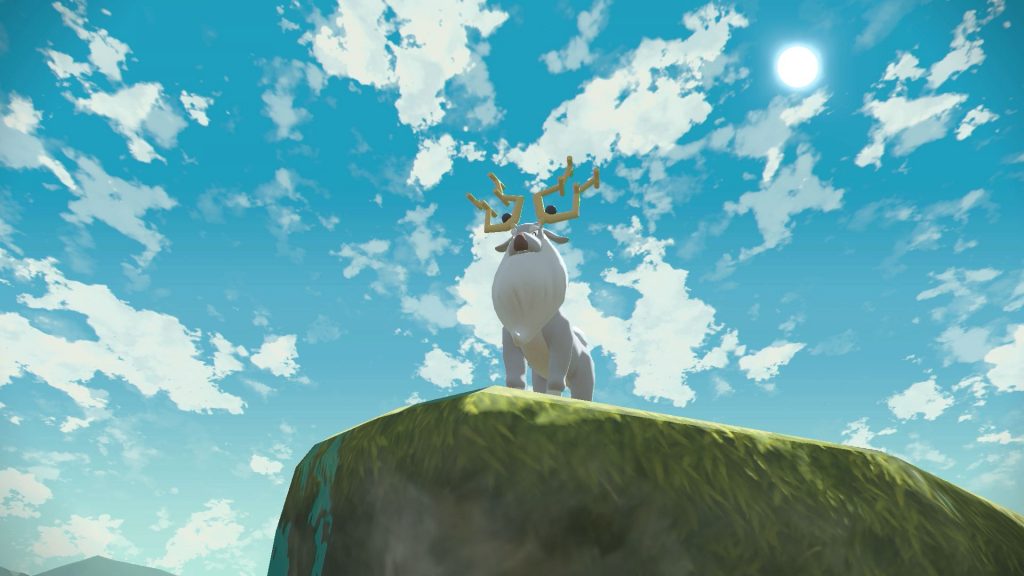 WHAT IT COULD DO BETTER

While the story is darker than previous Pokémon games, I think it could be darker. I understand Pokémon games are intended for children, but kids could graduate from traditional Pokémon games to the Legends series. If the Legends games had a T-rating and pushed the envelope just a bit further, a new lane could open and usher in some lapsed fans or new players. To some degree, I think Pokémon Legends: Arceus plays it safe with its narrative and if the sales of the game are representative of anything, it’s that we’re going to see another game in the series. But I would like to see Game Freak take the darkness a step further.

The game’s performance is not great. To be honest, it’s hardly good. Serviceable is the word I think best describes it and that’s after the use of the ‘Nintendo pass’. Legends: Arceus targets thirty frames-per-second and there are periodic dips. The draw distance is emersion breaking and the weird white outline while in low-lighting is baffling. What even is that? I’m not a developer, so I won’t pretend to have the answers, but performance must be improved going forward. Game Freak, I’m speaking to you now, you gotta do something. You get the ‘first outing’ slide this time but have Geodude use Rock Polish and buff out the chips in the paint.

The last improvement I have is a lofty nit-pick, but voice acting could take this game to the next level. Even if it’s only during cut-scenes. Legends: Arceus is a cut above the traditional games but the lack of voice acting feels like a relic of the past. I’m sure voice acting would affect performance in some sense but cut-scene only voice-over might be the solution to that. I won’t hold my breath but similar to how the LEGO games were elevated by voice acting, the same could be done for the Pokémon Legends series. If that’s on the horizon. 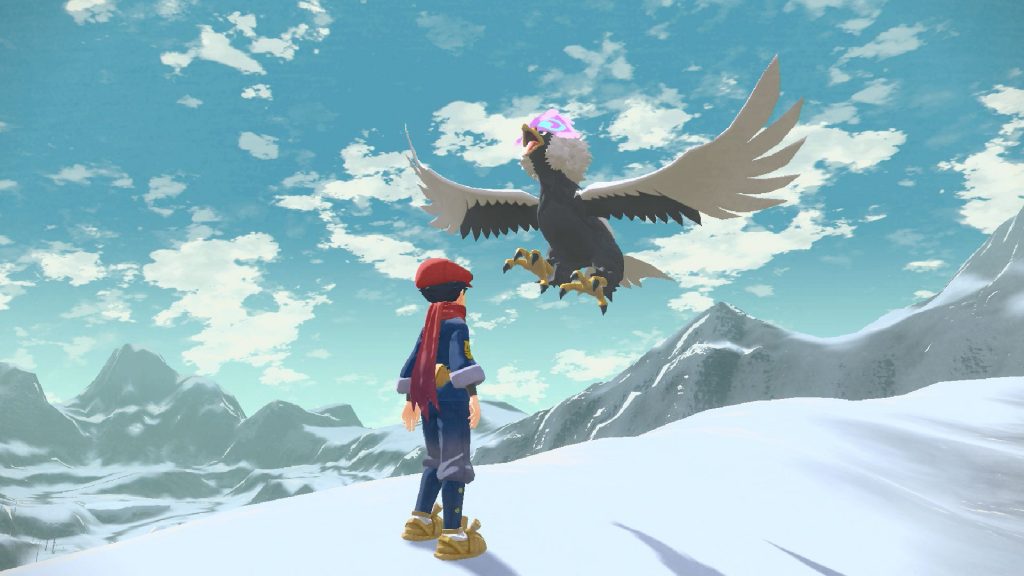 Game Freak has found itself in a predicament with the Pokémon games. The franchise is more popular than ever, and with that success comes a following of dedicated fans. Fans that want the developers to keep doing what got them to the dance.

Any creative person will tell you, continuing to make the same album or movie, gets less fulfilling every time. It’s why you see bands make experimental albums or actors go from comedies to dramas. On the one hand, by trying something new, the creator finds the fulfillment they’re looking for. But if they step too far out of their genre, they risk upsetting the fans who love their work.

It’s a bit of a catch twenty-two. Fans will be outraged if they decide to tweak the formula and make too large of a change. But if they don’t change it enough, the final product feels half-baked or gimmicky. I’ve found Game Freak to be dabbling in the latter of those two options. But I think they have found a solution that allows them to have creative freedom while continuing to satisfy the fans.

By allowing a studio-like ILCA to work on the remakes of the beloved Diamond and Pearl games, it provided Game Freak the opportunity to oversee its development while also expressing themselves in a new way. But with the franchise they built and so clearly love. Releasing Brilliant Diamond and Shining Pearl in late-2021 meant the fans had their appetizer. By late-January 2022, they were ready for the main course that Game Freak had been cooking.

In my opinion, Pokemon Legends: Arceus succeeds in infusing action RPG elements with the Pokémon franchise by taking the Pokémon outline and connecting the dots with a more profound battle system, a fresh take on boss fights, and more versatile party-management systems. While I feel Legends: Arceus lacks performance, the core gameplay is fun and creates unique moments for the series. Sales aside, this is why I believe Pokemon Legends: Arceus has launched a new series of Pokemon games.

Five hours into the game, I felt like I was missing something, or the game left something to be desired. But once I had quelled the first frenzied Lord, I started to understand what the game was doing. Ten hours later, I couldn’t wait to get home from work and was itching to continue exploring the Hisui region.

The biggest complaint I have is in the performance department. I can’t help but think that the hardware Legends: Arceus is holding it back considerably. But for the first attempt at something of this scale on a console/handheld hybrid with outdated system specifications, Legends: Arceus provides bundles of fun. Despite that, I’m willing to overlook it and enjoy the game for what it is. Since the Switch is apparently in the middle of its life-cycle, and we have the handheld only Switch Lite, maybe Nintendo makes a console-only Switch “Pro” and can improve the performance someday.

I believe Pokémon Legends: Arceus is beginning a new era for Game Freak and Pokémon games. It has its flaws but its gameplay is above average and succeeds in what it sets out to accomplish. 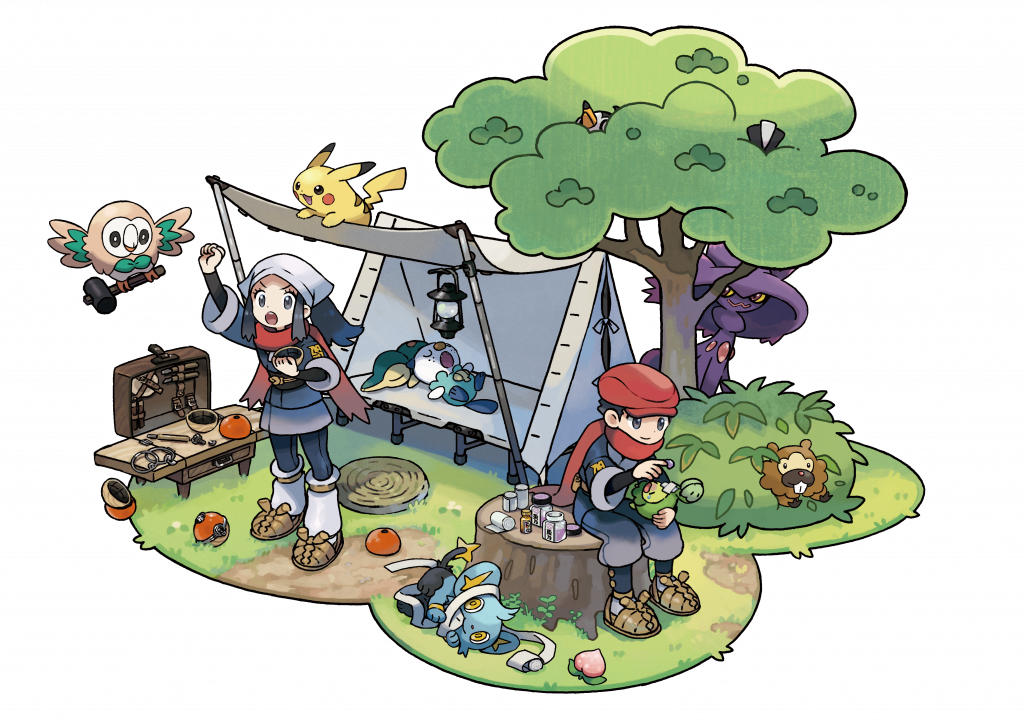