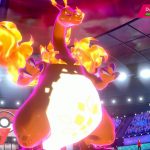 After a month’s hiatus, we are back folks with another Pokémon Battle Team strategy. This will be the fourth strategy we introduce here and this one is a blast. Not saying that just because we are using a Charizard this time either.

We are going to utilize a weather strategy that takes advantage of Sunny Day. We will use a mixture of Pokémon that will take advantage when Sunny Day has changed the field. So buckle up as we get into this Doubles Battle Team: Hot Stuff! 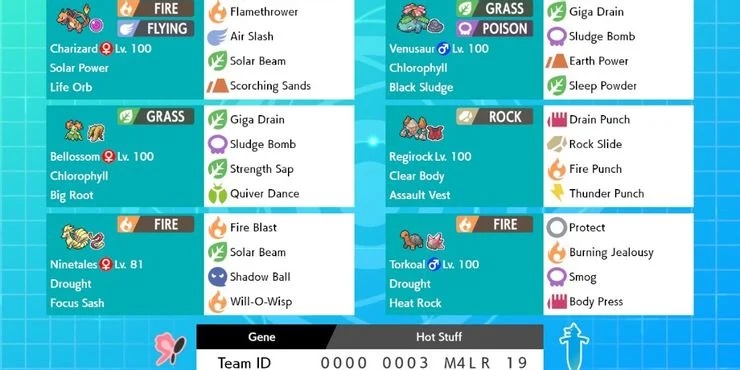 When going into battle using a team focused around changing the weather to your advantage requires a little strategy. As we all know, in Doubles Battles you only get to use four of the six Pokémon in your team. So when you get a peek at your opponent’s team before the battle begins, you must think about which Pokémon will give you the best chance at victory.

You need to think about how you will set up the beginning to take advantage of the Sunny Day field. Something to remember is your opponents could also have a field-changing effect, so you might have to fight against that strategy as well.

When the field becomes sunny it weakens the power of all Water-type moves. This means that many Fire and Rock-types end up being far harder to defeat thanks to Water-types and Rain teams being so common. Thanks to this, your Torkoal and Regirock will be monster tanks that can be nearly impossible to take down without your opponent putting all their effort into damaging them.

You can also have your Venusaur and Bellossom use their status moves to slow down your foes thanks to the Chlorophyll ability. Lastly, you can use a fan favorite in Charizard or Ninetales to blast your opponent with boosted Fire-type attacks. 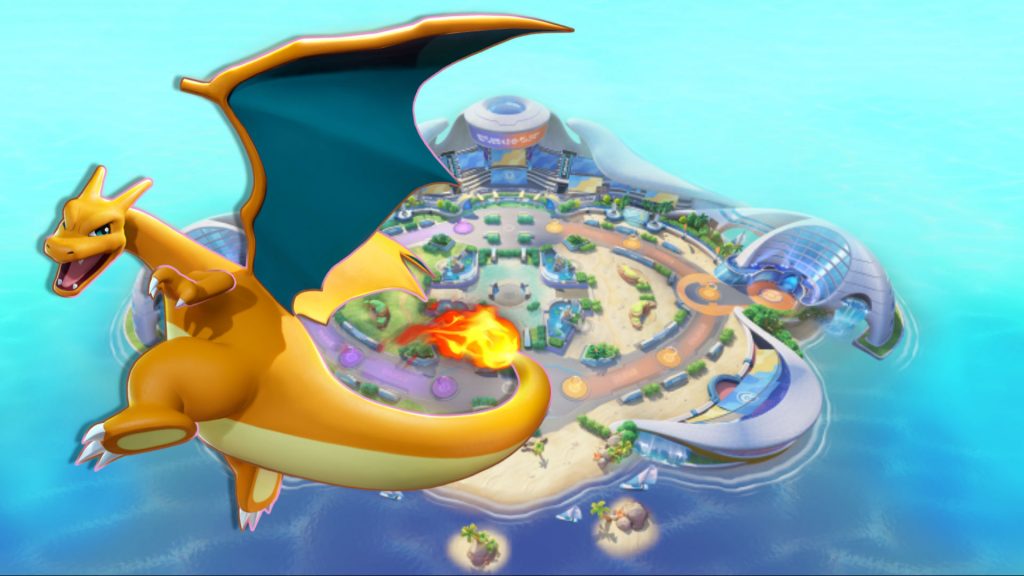 When it comes to this Fire/Flying-type Charizard, he is definitely a fan favorite Pokémon. Charizard is a Pokémon that can dish out a lot of damage, especially when utilizing the Sunny field effect.

Our Charizard here is a female that has the Solar Power ability. This means it boosts the Special Attack stat in harsh sunlight, with the downside of her Hit Points decreasing every turn. Small price to pay to lay down massive damage. Charizard is holding a Life Orb which boosts the power of her moves, but she loses some Hit Points on each hit. Charizard’s highest base stats are her Speed and Special Attack.

When it comes to the moves for Charizard, she knows Flamethrower, Air Slash, Solar Beam, and Scorching Sands. Flamethrower is a good Fire-type move that may leave the target with the Burn status. This gets a boost if the field is enveloped by sunlight (Sunny Day).

The next move is Air Slash which may cause the foe to flinch and skip its turn. Then we have Solar Beam which is normally a two-turn attack, but if sunlight is in effect then it’s a one-turn move. Last for this Pokémon is Scorching Sands which is a Ground-type move that may cause Burn. She is weak to Water and Electric-types, but super weak to Rock-types. 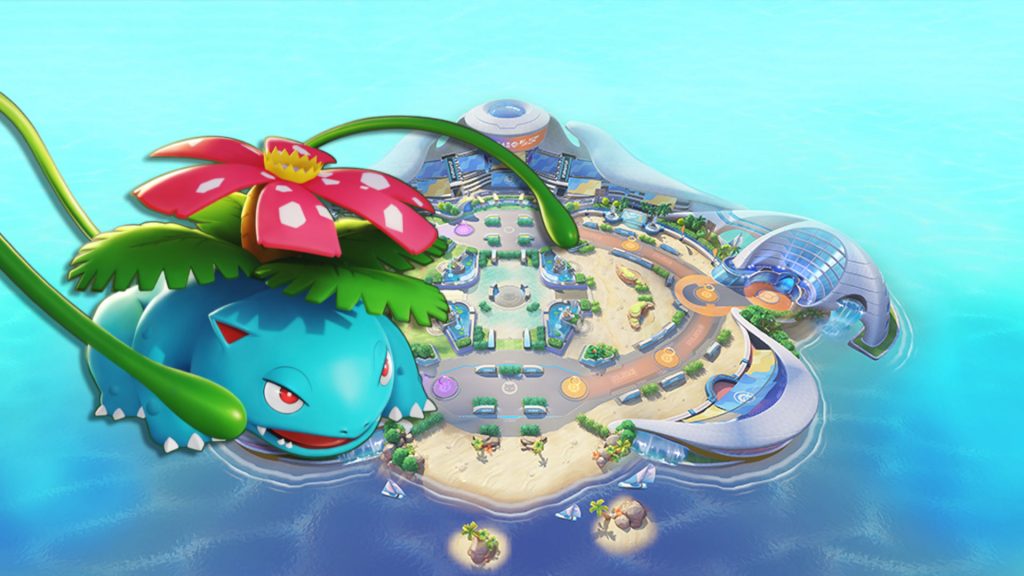 The second Pokémon on the list is the Grass/Poison-type Venusaur. Here we have a male Venusaur with Chlorophyll ability, which boosts Speed stat in harsh sunlight.

This can be helpful to go before opposing Pokémon and hit them with a vital status move if you need to set up again. He is holding Black Sludge which gradually restores Poison-type Pokémon. Any others will be damaged while holding it. Also very useful to get set up again or hold out after being hit a few times. Venusaur’s big stats here are Hit Points, Special Attack, and Special Defense.

Our moves for Venusaur are Giga Drain, Sludge Bomb, Earth Power, and Sleep Powder. Giga Drain is a useful Grass-type move that drains the target’s Hit Points to restore some of ours. It gives us back half the damage the target Pokémon takes.

Next, we have the Sludge Bomb which is a strong Poison move with has potential to Poison the target. The third move is Earth Power which deals good damage and may lower the targets Special Defense. The last move on the list is the status move Sleep Powder that as you think may put the target Pokémon to sleep. Venusaur is weak to Fire, Ice, Flying, and Psychic Pokémon moves. 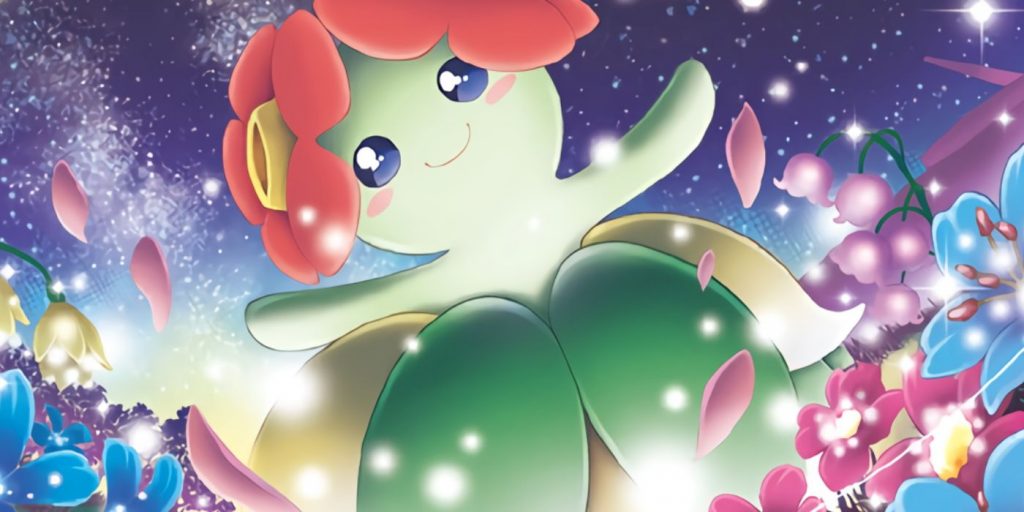 Don’t let the next Pokémon’s cuteness fool you, it’s none other than the Grass-type Bellossom. Bellossom is a female with the Chlorophyll ability just like Venusaur to increase speed in sunlight.

She is holding the item Big Root which boosts the number of Hit Points she gets back when using moves that steal Hit Points. Like Venusaur she is our other Pokémon that use status effect moves. Three big stats for her are Hit Points, Special Defense, and Defense.

The Pokémon moves she knows are Giga Drain, Sludge Bomb, Strength Sap, and Quiver Dance. Like with Venusaur, Giga Drain will drain a Pokémon’s Hit Points and restore hers. She gets the bonus of the Big Root to heal more though.

Sludge Bomb will damage a Pokémon with a chance to Poison them. Strength Sap is a move that restores your Hit Points by the same amount as the target’s Attack. Then it lowers the target’s Attack stat. The last move is Quiver Dance which boosts the user’s Special Attack, Special Defense, and Speed stats. Bellossom is weak to Fire, Ice, Poison, Flying, and Bug Pokémon. 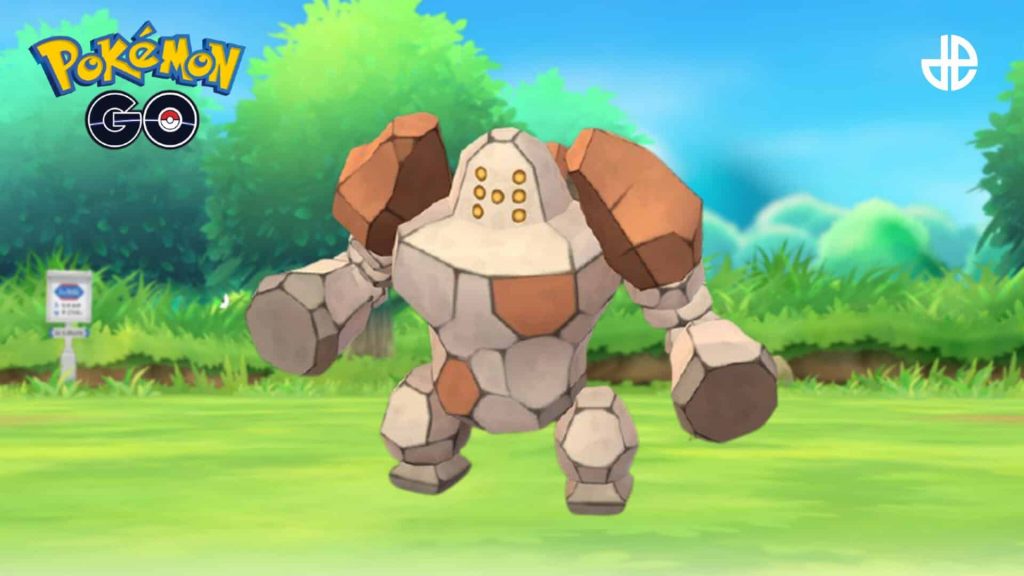 Next up on our team is the Legendary Rock-type Pokémon Regirock. Regirock is genderless like most Legendary Pokémon and has the ability of Clear Body. Clear Body prevents other Pokémon moves or abilities from lowering the Pokémon’s stats, which is really good.

Regirock is holding the Assault Vest item which raises Special Defense but prevents the use of status moves. Regirock is one of our big-time tanks and is hard to kill without opponents focusing on him heavily like our Torkoal. Important stats for Regirock are Defense, Special Defense, and Attack.

This legend knows the Pokémon moves Drain Punch, Rock Slide, Fire Punch, and Thunder Punch. Drain Punch is a cool Fighting-type move that damages the target and gives us some health back.

Rock Slide is a Rock-type move that hits all foes and may cause them to flinch. Fire Punch is a Fire-type move that may leave the target Pokémon with a Burn.

The last move we have for Regirock is Thunder Punch which is an Electric-type move that may leave that target with paralysis. Regirock has a nice variety of moves here which covers multiple Pokémon types. Regirock is weak to Water, Grass, Fighting, Ground, and Steel Pokémon moves. 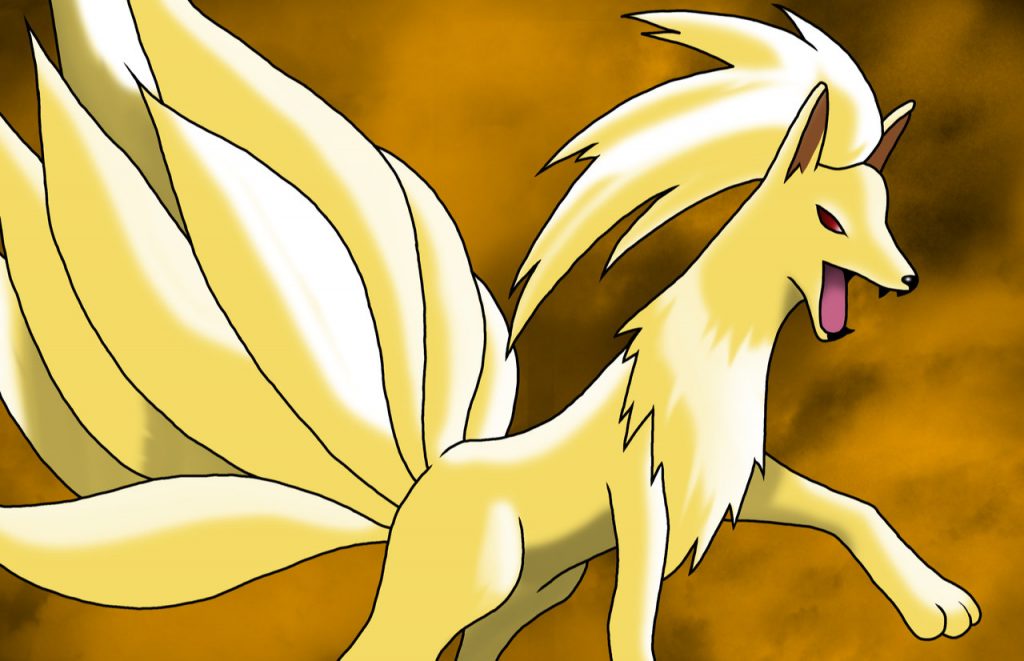 Next, we have the beautiful Fire-type Pokémon Ninetales. Ninetales is female and another one of our primary attackers like Charizard.

She has the ability of Drought which cause harsh sunlight when she enters the battlefield. This is the Sunny Day effect I was mentioning before that we can take advantage of with our Pokemon abilities, and moves, which also helps with our weaknesses.

Ninetales is holding the Focus Sash which will prevent her from dying if she is at full health from a potential KO attack. We will be left with 1 Hit Point and the item disappears for the battle duration. Her important stats are Speed and Special Attack.

The moves our Ninetales know are Fire Blast, Solar Beam, Shadow Ball, and Will-O-Wisp. Fire Blast is a strong Fire-type move that gets boosted like all fire moves of course due to the harsh sunlight. The target may also be left with a Burn.

Next, we have Solar Beam which as I mentioned before is a two-turn move, but if we have the sunlight it becomes one-turn. Shadow Ball is a Ghost-type move that may lower the target’s Special Defense when it hits. Will-O-Wisp is a status move that leaves the target with a Burn. Ninetales is weak to Water, Ground, and Rock Pokémon. 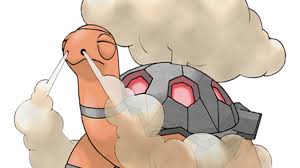 The last Pokémon for this team is Fire-type Torkoal. Torkoal is our other setup Pokémon like Ninetails and is a tank.

Torkoal is a male with the Drought ability which as we know envelops the battlefield in harsh sunlight. He is also holding the Heat Rock which extends the Sunny Day-style sunlight is the holder caused it. One of our important Pokémon for sure. I definitely like using him to set up the sunlight for us to take advantage of. The important stats for him are Defense, Special Defense, and Hit Points.

The Pokémon moves Torkoal knows are Protect, Burning Jealousy, Smog, and Body Press. Protect is a move that makes us immune to most things for one turn but if used in succession is likely to fail.

When it comes to the Hot Stuff team, it isn’t super difficult to figure out. You need some strategy in the beginning, but once you get used to it, it will be way easier.

I am enjoying finding these fun and unique teams. When it comes to battling I prefer to use more of the obscure teams to catch people off guard. While this Weather Team isn’t super unique it still provides interesting strategies that people don’t usually gravitate to first.

I like to test my brain and make it think. If you are into these weather strategies I definitely recommend trying this team out. There will be more Pokémon teams in the future so stay tuned. If you want to see me write about a team you know of comment below or message me on Social Media.