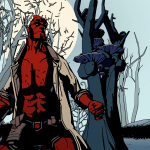 You are reading
The Game Awards 2022 – Hellboy: Web of Wyrd

The Game Awards are back. A one-night-only celebration of all things gaming live from the Microsoft Theater in downtown Los Angeles. Today December 8th, the best games from the year will be recognized and a ton of game announcements will be made. With that, we have a new look at a brand-new Hellboy game. Hellboy: Web of Wyrd is coming to PlayStation, Xbox, and PC.

The game will be published by Good Shepherd Entertainment, a company under the Devolver umbrella. In particular, a surprising turn from some time ago as mega-publisher Embracer now owns Dark Horse Comics and subsequently the Hellboy IP. The developer is Upstream Arcade, their previous work includes the 2021 indie game West of Dead. Fans of their previous work will notice the similar art style found in Hellboy: Web of Wyrd. It has also been announced that Lance Reddick (Netflix’s Resident Evil, Horizon) will voice Hellboy.

More on Hellboy: Web of Wyrd From The Press Release

“A rogue-lite action adventure with an original story created in partnership with Dark Horse Comics and creator Mike Mignola. Featuring monstrous toe-to-toe brawling, you need to chain together hard-hitting melee and ranged attacks to fight a diverse array of increasingly nightmarish enemies. Like the comics, the game sends Hellboy on a series of vastly different and wholly unique adventures. While those stories stand on their own, they are all tied to the mysterious legacy of The Butterfly House. When an agent of the B.P.R.D. is sent on a reconnaissance mission to the mansion and promptly goes missing. It’s up to you – Hellboy – and your team of Bureau agents to find your missing colleague and uncover the secrets of The Butterfly House.”